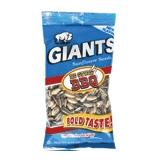 A sunflower seed company in the middle of the frozen prairie is trying to help fans save “The 4400,” a science fiction show axed last month by USA Network.

Fans of the show are protesting the cancellation by sending network executives sunflower seeds, the favorite snack of a character named Dr. Kevin Burkhoff. Many are Giants Sunflower Seeds, manufactured by a Wahpeton-based company with eight employees.

“We thought they were loony tunes at first,” said Jay Schuler, head of Giants Snacks LLC, which makes Giants Seeds. “But it has been a wonderful thing.”

About 1,700 bags had been ordered from Giants by the end of the business day Thursday, the day before the campaign’s official launch, said Tom Schuler, who handles Internet sales for Giants Seeds.

“It’s kind of cool to see all these loyal fans,” said Tom Schuler, who has been including notes from fans with most orders. “It’s a little crazy, but I feel good about it.”

Kristin Schulman, a spokeswoman for USA Network, said the network had no one available Thursday to comment on “The 4400” campaign.

The campaign is modeled after one waged by fans of the CBS show “Jericho,” which the network agreed to continue after it was deluged with calls, messages and about 50,000 pounds of peanuts. The peanuts stemmed from a line by one of the characters.

One of the organizers of the protest, June Terrell, said she picked Giants Seeds after an online search. She considered the company a good luck charm because its corporate offices are based in Minnesota, where “4400” lead actor Joel Gretsch was born.

The company that worked on the peanut campaign declined to get involved because “they were still recovering from Jericho,” said Terrell, of Memphis, Tenn.

Giants Seeds started in 1995, when the company sold 70,000 bags of seeds in just one state, North Dakota. The seeds are now available in 36 states. Giants sold 4.9 million bags last year.

Many overseas fans are ordering from Giants over the Internet to avoid shipping hassles. The company said it has received inquiries from the Netherlands, Israel, Venezuela, Australia and South Africa, among other countries.

“Normally we don’t do international orders, but we opened it for this,” Tom Schuler said.

“The 4400” tells the story of 4,400 people who were abducted at various times but returned at the same time in the foothills of Mount Rainier. They have not aged since their abduction and remember nothing about the time they were gone.

Fans are at least hoping for “closure to a magnificent tale of what could be reality on some level,” said Sandy Williams, 60, of Dardanelle, Ark.

“Honestly and simply, the story made me think beyond just entertainment like so many shows seen on television today,” Williams said. “It caused me to pause and examine my values, from religious to political to personal.”

Dee Henke, 57, of Santa Cruz, Calif., said she bought several bags of sunflower seeds “and will be ordering more if necessary” when she gets paid next week.

“Living on $935 per month in California is hard … but this is worth it,” Henke said.