“Director Gregory Hoblit’s second release in under a year, Untraceable is an aptly made, albeit generic thriller.” 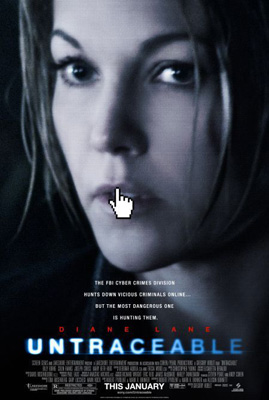 You might have noticed on the promotional materials for Untraceable that one critic called it the “Silence of the Lambs for the internet generation”. This bold statement might come as a surprise, especially since most internet savvy audiences probably consider the Anthony Hokpins classic to already be our generation’s Silence of the Lambs. Even more surprising is that the new Diane Lane vehicle comes from director Gregory Hoblit, a filmmaker who seems to be cranking out thrillers at an alarming rate, following up his most recent hit, Fracture, with yet another by-the-numbers murder mystery.

What happens when a serial killer uses America’s obsession with the internet to off his victims? You send FBI Cyber Agent Jennifer Marsh (Diane Lane) to catch the baddy, that’s what. Kidnapping innocent victims and torturing them to the point of death, an untraceable killer is using our culture’s newest mass medium to streamline grizzly violence right into our homes. As the killer’s seemingly random victims start to lead closer and closer to the FBI task force, agents put the pieces of the puzzle together bringing this unique serial killer’s identity to light. Will Marsh and her team be able to stop him before he strikes again?

Director Gregory Hoblit’s second release in under a year, Untraceable is an aptly made, albeit generic thriller. Transforming the concepts found in Saw into a dummied down, almost PG-13-like environment, Untraceable offers a few grizzly deaths and taught suspense. The only real problem working against Untraceable is its predictability.

Unlike Fracture, Hoblit didn’t have a somewhat clever cell phone gag to surprise viewers with. Instead the Untraceable screenplay relies heavily on recycled gags from; you’ve guessed it, The Silence of the Lambs. There are only so many times a filmmaker can get away with using the “wrong house” trick before it gets tired. It was startlingly cool in Silence of the Lambs, but relying on the bit twice for Untraceable is a bit tedious, don’t you think?

Luckily Untraceable works off of such a unique concept, it manages to keep the film moderately engaging. Just the idea that the uncontrollable nature of the internet could hasten someone’s death is a frightening notion. Diane Lane, who still looks fantastic at 43, Billy Burke and Colin Hanks all do a great job of making this threat seem alarmingly dangerous. Plus one of the principle cast members gets executed in a surprisingly gruesome way, which always helps to keep things fresh.

On the other hand, the climax of the film quickly begins to sputter out. While it surely provides a crowd pleasing moment, Diane Lane’s character, a single mom computer whiz, suddenly turns into MacGyver, narrowly escaping a dangerous situation and dramatically posing for all to see. The awkward final frame will likely leave audiences laughing rather than shivering with fear.

Ultimately Untraceable, like most films, doesn’t live up to its marketed hype. Barring that you’re someone who has avoided seeing the quintessential serial killer movie of our lifetime, Untraceable could come off as a very hip and exciting thriller. For the rest of us, Hoblit’s latest picture will seem quite run of the mill, but fun nevertheless.