“If ultra-bloody violence is your cup of tea, then there’s certainly plenty to drink up with Stallone’s nonstop thrill-ride Rambo.” 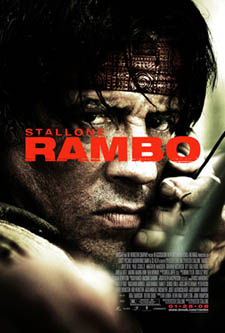 Twenty years after Rambo III and only 2 years after Rocky 6, Sylvester Stallone returns to reprise a seminal 80’s action film role as John Rambo, a Vietnam veteran who has trouble reestablishing himself back into regular life. In an attempt to distance himself from normalcy, he holes up in various remote locations and gets by with his expert knowledge in survival. In Rambo, he is driven to the anarchical land of Burma, where a 60 year old civil war keeps the villagers in constant fear. But as one-man armies usually demonstrate, Rambo is most assuredly not a man to be messed with.

The fourth installment in the famous soldier-of-fortune series finds John Rambo (Sylvester Stallone) in northern Thailand as a boat captain disenchanted with the world, and seemingly far removed from humanity. When a group of human rights activists convinces the weary commando to transport them upriver into war-torn Burma, and are captured shortly after their arrival in a local village, Rambo must lead a team of maniacal mercenaries on a dangerous rescue mission into a hellish war camp where death may be the easy way out.

The portrayal of violence in films is often used to demonstrate a specific point, such as comedic excessiveness, realism, political seriousness, a demand for bloodthirstiness, or even to show a highly stylized sense of art. In Rambo, gratuitous violence for the sake of encouraging cheers from a blood-frenzied crowd is perhaps the only reason for such brutally graphic and realistic bloodshed, but it is undeniably thrilling. Where Rambo III featured a stick-fight introduction in which Rambo squares off against a skilled martial artist and the two exchange dozens of blows with wooden bludgeons, Rambo IV doesn’t showcase any bloodless, cartoon violence — instead it attempts to show every dismemberment and evisceration with as much attention to gory detail as possible. Here, carnage is not Popeye-fun — it is stomach-churning. Art it is not, but for unabashed gut-wrenching excitement, it positively takes the cake.

The introduction of a helping hand for John Rambo is something fresh, even though in the previous films he is never completely alone. Here, in the bloodied battlefields of Burma, a group of hired mercenaries introduces camaraderie and military aid for the military juggernaut. Each carries a unique personality, much like the colonial marines in Aliens, one with an over-the-top penchant for cursing, one with schoolboy charm and decency, one with unflinching heroism and another plagued with constant doubt. Each character is likeable in a singular despicable ruffian way, and their interactions with Rambo help to develop his typical one-dimensional character beyond that of the previous films. The young woman, Sarah (Julie Benz) who convinces John to help in the first place, is an initial driving force, and later the brutality against the villagers fuels Rambo to “live for nothing, or die for something.”

If ultra-bloody violence is your cup of tea, then there’s certainly plenty to drink up with Stallone’s nonstop thrill-ride Rambo. A simple premise reminiscent of parts 2 and 3 sets up a rescue and final confrontation as brutal as any committed to celluloid. The explosive final firefight unleashes nearly twenty minutes of pure, unrelenting carnage that simultaneously pushes the boundaries of action and bloodletting.

As John states early on, “when you’re pushed, killing’s as easy as breathing,” and Rambo certainly doesn’t shy away from the fatalities or the questionable need to evince the atrocities of war. With machinegun battles that leave little more than bloody human pulp, claymore explosions that wipe out the jungle in nuclear mushroom cloud fashion, grenades that dismember villagers with gushing red barrages, machete disembowelment, and decapitations galore, Rambo is not for the squeamish, and most definitely for those who want to see heads roll and the body count reach unspeakable proportions.