“In the Name of the King is a big step forward for Uwe Boll.” 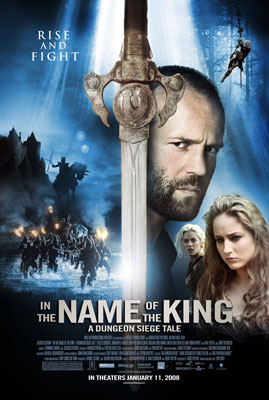 Audiences are likely to leave In the Name of the King: A Dungeon Siege very confused. Not because notorious German filmmaker Uwe Boll put his distinctive stamp on the film, but because nearly every actor in this misfired epic is dreadfully miscast. That being said, aside from the picture’s abysmal performances, In the Name of the King is a big step forward for Uwe Boll.

When the evil Gallian casts a spell over the kingdom of Ebb, recruiting all the ghoulish, warmongering monsters to act out his will, a man named Farmer must stand up to defend his countryside and fulfill his destiny In the Name of the King.

Complete with treason, magic and monsters the latest Boll videogame adaptation is luscious visually, but lacking in punch. The weak script, gratingly translated to the screen through painful acting, makes the film’s otherwise spectacular action pieces rather bland. The biggest problem facing In the Name of the King is that nearly all the characters range from being forgettable to laughably awful.

While Jason Statham and John Rhys Davies fit right into the period piece, many of the notable American names seem like odd casting choices. Keeping an open mind doesn’t help the situation either. Every time Ray Liotta, Burt Reynolds or Matthew Lillard appear on screen, one can’t help but be completely sucked out of the world that Boll has created. Their presence exists only for the sake of star power, and each devotes as much energy to the project as it took to cash their paycheck.

As the comic relief Ron Perlman and Will Sanderson certainly succeed, although much of their character development seems to have been lobbed off in this shorter domestic cut. Notably, a scene in which Statham, Perlman and Sanderson must cross a ravine should garner quite a few laughs, proving once again that Boll might be better off focusing on a small, comedy driven piece.

While the weak CGI detracts slightly, all of the practical stunts are executed with extreme attention to detail. Responding to complaints about the quality of his films, Boll has spent far more time in preproduction on his recent shows, making sure to map out the action and effects. With In the Name of the King this extra work has surely paid off. The choreography and camera angles help make this modestly budgeted fantasy seem far more epic in scale than it actually was.

Most of the fights flow logistically well, however in the last and most important battle there are strategic and stylistic blunders that hurt the overall project. Why the King’s army would give up the high ground in a stormy battle is beyond all rationale. To top it off Boll reverts back to his House of the Dead, slow motion fight scenes for the final confrontation between Statham and Liotta. Had action like this been established early in the film it wouldn’t have seemed so awkwardly out of place, however it comes across as a completely unmotivated stylistic choice after watching nearly two hours of violence that is somewhat grounded in reality.

With each passing production Uwe Boll continues to show marked improvement as a filmmaker. All In the Name of the King lacks is an engaging story and appropriate cast. Boll did a more than adequate job making sure that each action piece works well, efficiently using every penny his budget allowed. With those skills in tow, now all we need is to give the director a good, solid screenplay and instead of confused, audiences might find themselves pleasantly surprised.