“One Missed Call works just like its kitschy plot device. The picture has heralded the time, date and death of the PG-13 Japanese horror remakes.” 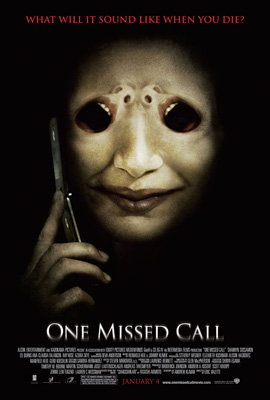 You cannot escape fate, and poor Ed Burns seemingly cannot escape acting in bad movies. One Missed Call is quite the misstep to start 2008 on, continuing the recent horror paradigm of lame duck Japanese remakes and un-frighteningly bad PG-13 thrillers.

Featuring yet another vengeful ghost that inhabits an inanimate object, One Missed Call is strung along by a series of murders caused by a ghoulish cell phone baddie. Leaving a voice or video message on the victim’s mobile phone with the exact date and time of their death, One Missed Call could have easily been filled with taught Hitchcockian suspense. Instead the production is riddled with more of the same, rehashed imagery we have seen in other Asian horror imports like The Ring and The Grudge. In fact the structure found in One Missed Call is seemingly ripped right out of Gore Verbinski’s successful American remake, featuring the two principle characters racing around to solve the mystery of this killing spirit before it gives them the axe too.

While the original Takashi Miike film was itself flawed, French filmmaker Eric Valette has taken the concept to a whole new low. While the cast does the best they can with a flawed script and poor direction, and the cinematography is more than adequate, Valette approaches the film with zero intensity, drumming up the film’s only scares through cheap gimmicks and gags.

Feeding the audience the date and time of the characters’ deaths should have created a ticking clock, keeping viewers on edge in anticipation of the big moment. Instead we are treated to unimaginative death sequences dummied down for the picture’s PG-13 rating. However, unlike the victims in One Missed Call, the audience isn’t given a piece of candy for all the pain we have been caused.

While Ed Burns and Shannyn Sossamon move from one ludicrous clue to the next, quickly narrowing down just who the ghoul might be and why they are using cell phone contact lists to select the close circle of victims, One Missed Call attempts to shock the audience with a few cheap twists. For anyone who has been paying attention to the film’s inane rules, the picture’s final kill should come as no surprise, and while kudos must be given to Valette for attempting to stray away from the cliche Hollywood finale with a bleak outcome, it is too little, too late.

The film industry works in a cyclical fashion, and One Missed Call works just like its kitschy plot device. The picture has heralded the time, date and death of the PG-13 Japanese horror remakes. Too bad the ghost forgot to call Hollywood studios, because while audiences will certainly be fed up with these soulless efforts after witnessing the tremendously bad One Missed Call, that hasn’t stopped similar product from flooding the 2008 release calendar. So much for the New Year…