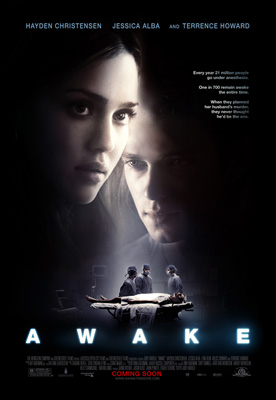 There’s a medical phenomenon known as Anesthesia Awareness, in which a patient is consciously aware of things despite being under general anesthesia. The degree of consciousness varies from patient to patient; some recall only vague, distant events while others recall every single detail, right down to the pain of being opened with a scalpel. The word “disturbing” doesn’t even begin to describe this because it’s not the result of a twisted imagination. It’s real. But Awake–a film that uses Anesthetic Awareness as a plot device–is not real, which is probably why it doesn’t work. What begins as an engrossing character study soon becomes a hopelessly misguided psychological thriller, with plot twists so implausible that they veer into ridiculous territory.

Much like this review, the film opens with a statistic: over 21,000,000 people are put under general anesthesia each year, and while it succeeds in putting most into a state of complete unawareness, some 30,000 are not so fortunate. They have a conscious understanding of what’s happening to them, and worst of all, they can’t say or do anything because their muscles are paralyzed. We’re told this, obviously, because the main character–rich, young New York investor Clay Beresford (Hayden Christiansen)–goes through the same experience. He was born, you see, with a defective heart, and at age twenty-two, he needs to have a heart transplant. His mother, Lilith (Lena Olin)–who makes herself seem overbearing–insists that renowned cardiology expert Dr. Jonathan Neyer (Arliss Howard) perform the operation. But Clay opts for his friend, Dr. Jack Harper (Terrence Howard), who had previously saved Clay’s life.

This doesn’t sit well with Lilith, and neither does the fact that he’s in love with her secretary, Sam Lockwood (Jessica Alba). She and Clay have been secretly engaged for six months, which, as you can guess, makes their relationship difficult to maintain. Hiding their love from the world gets so tiresome that Clay finally decides to marry Sam on the spot. No expensive, elaborate ceremony with New York’s elite in attendance–just a minister, a witness, the bride, the groom, and their love. Of course, the night of their wedding is also the night Clay is admitted to the hospital and prepped for surgery, because that just happens to be when a donor heart is being delivered. Clay is soon thereafter lying on an operating table with an oxygen mask over his nose and mouth, and he’s asked to count backwards from ten as one of the nurses injects the anesthesia into his IV.

The first few moments of the operation scene are effective, if incredibly unsettling. Clay quickly realizes that, even though he’s paralyzed, the anesthesia hasn’t done its job. He’s still awake. He feels the discomfort of his chest being shaved without any shaving cream, and the iodine is cold and smelly. Finally there’s the initial incision and the device used to hold the chest cavity open, and I don’t think anything more needs to be said about that.

In order to distract himself from the physical pain, Clay tries to focus on Sam, the girl he loves. And this is pretty much when the film loses its way, as his thoughts are soon interrupted by the conversation between the doctors performing the surgery. Did Dr. Harper just say that he altered the order of the donor list? Did he say that they should hurry up and kill Clay before anyone gets suspicious? If you think I’ve just given away the plot twist, you’re wrong–the biggest plot twist comes later, something so over the top that it unfairly reverses what we thought we knew about most of the characters. It’s not anticlimactic, but it’s definitely inappropriate, especially since the first half of the story was so focused on establishing character. By the second half, we learn that this establishing has counted for nothing, save for an excuse to show how crafty a screenwriter can be.

But Awake doesn’t earn the right to be crafty simply because it fails to tease the audience along the way. It starts off straightforwardly then ends by shoving a slew of revelations into our faces at once; there’s no mystery that builds itself up, no sense that there’s something odd about the situation. The plot twist is self-indulgent and nonsensical, existing as nothing more than a way to shock the audience.

It doesn’t help that the film gets inexplicably surreal. At a certain point in his operation, Clay has an out of body experience; in spirit form–in which he’s unscarred, barefoot, and dressed in scrubs–he exits his physical self and wanders the halls of the hospital, replaying both the recent and distant events of life. This is presumably a way for him to figure things out, to help him piece things together and understand what led up to the sinister plot against him. At times, he can also see what’s currently happening, such as the fact that a tear has escaped his eye as he lies on the operating table. All this, in turn, becomes an unnecessary commentary on the bond between a mother and son, which in this case is heartfelt and creepy at the same time.

And speaking of creepy, here are some more facts about Anesthesia Awareness, courtesy of the Anesthesia Awareness Campaign, Inc. website: it’s reported between one hundred to two hundred times a day in the United States alone. If saying this has managed to scare you away from hospitals, then I’ve done the job Awake set out to do. You now don’t have to actually see it and be disappointed by everything else it has to offer.