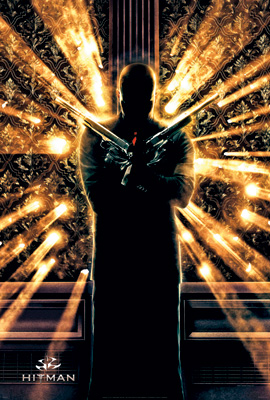 As contradictory as it may sound, finding a good mindless action movie is actually a rather challenging task. Luckily we live in a world where adapting stories and characters from mindless action video games is commonplace, and the creators of the Hitman movie have gone to great lengths to showcase plenty of the blood, bullets, and babes requisite of a proper translation of the popular assassin adventure.

Raised to be an elite assassin, Agent 47 (Timothy Olyphant) carries out jobs for a mysterious organization and for a price. When his employer sets him up in a political assassination attempt, the hitman must uncover the leaders behind the conspiracy while simultaneously protecting a sassy prostitute and being hunted by both the Russian Secret Police and two determined Interpol agents.

Wasting little time with a tedious back story, (and thankfully straying from contrary religious tones as suggested by several trailers), Hitman jumps right into the plot, full of political conspiracies, secret agency machinations, police investigations, and other reasons to have a gunfight in a crowded location. While those unfamiliar with the source material may question Agent 47’s origins, it’s actually rather commendable (and practical) to forego such setup and just plunge directly into current events with only the accepted knowledge that our antihero is the most skilled of killers. That being said, the story does convolute itself with excessive setting changes and rehashes of political thrillers mixed with revenge mysteries, but the plot never interferes with that which is most important — the action.

Several unique scenes of bloodshed find their way into Hitman, and as expected the body count reaches an impressive sum. While not overloaded with meaningless violence, a few sequences stand out as attaining just the right amount of machismo cool, most notably the decimation of a drug lord’s domicile and a four-way elite assassin duel apparently inserted to mimic the combat abilities present in the game. At a few points throughout the actioner it becomes evident that everyone involved is trying a little too hard to evoke awe, but some fast handheld shots and a few guns pointing at the screen later, all is forgiven.

Though Timothy Olyphant is likely not the first actor to enter one’s mind on hearing of a Hitman movie, he accomplishes the surprising feat of impressing upon the audience that he is indeed Agent 47. Plus the sharp black suits with red ties don’t hurt. Relative newcomer Olga Kurylenko, who exhibits an appearance resembling a cross between Catherine Zeta-Jones and Sophie Marceau, was also a wise choice, especially to tease the viewer with another staple prominent in the “Hitman” games.

Hitman successfully retains the necessary seriousness inherent in the subject matter and while it rarely covers new ground in the action-adventure genre, it also never slips into silly mockery (and it still provides plenty of references to its video game roots). Sacrificing story for style and bloodshed is much appreciated here, and entertainment of this nature is a rare treat over those that try too hard to be that which they are not. Hitman doesn’t indulge itself in such a charade and the result is a fun and sexy romp through the world of professional carnage.