Our friend and professional movie critic Joe Russo takes a look at two new films that are now in theaters and things are not looking good. Fred Claus, starring Paul Giamatti and Vince Vaughn is a light-hearted holiday season romp, while Richard Kelly’s Southland Tales takes a dim look at man’s not-too-distant future.

Neither film caught Joe’s fancy as he left the theater giving both films a weak SCORE of 4/10. 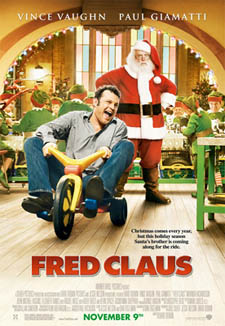 There is an awful dilemma when broaching characters as deeply ingrained in popular culture as Santa Claus. There is a fine line between showing the audience something new and not stepping on any toes by breaking away from the established mythos. We’ve seen everything in recent years from Santa’s job contractually passing on from person to person, to darker representations of the mythical figure as a stone drunk, wetting himself on the floor of the local mall. While some of these twists on the legend have been more popular than others, audience expectations are always an imminent challenge facing filmmakers who dare to tackle Christmas. In many ways David Dobkin has succeeded as much as he has failed with his latest cinematic outing, Fred Claus.

Jailed and in desperate need of money, Fred (Vince Vaughn), the bitter older brother of Santa “Nick” Claus (Paul Giamatti), reluctantly calls his sibling for help. Promising Fred the funds, Santa baits the very un-prodigal son into finally visiting the family up at the North Pole. To earn the agreed 50,000 dollars, though, Santa plans on putting Fred to work, right alongside the Elves.

What could have easily been developed into a simple, yet thoroughly entertaining feature quickly became muddled when screenwriter Dan Fogelman attempted to add more conflict to the story by introducing yet another antagonistic character, Clyde (Kevin Spacey), the efficiency expert. Threatening to shut down production at the North Pole, and using Fred’s gaffs to justify the decision, the clock is running out before Christmas Eve, and if Santa doesn’t make this year’s quota, he risks being shut down permanently.

Although not always consistent, what Dobkin has done best in Fred Claus was create a living and breathing Christmas world for his characters to live in. Building his own “Santa” mythology by showing audiences Fred and Nick’s youth, Dobkin easily establishes his spin on the jolly old man in the big, red suit, most notably as a sibling oblivious to his constant upstaging of his brother.

Working with the vast pockets of cash that only a producer like Joel Silver can provide, Dobkin had free reign to create an absolutely gorgeous universe for his characters to exist in. Balancing the coldness of Chicago and the vivid, warmth of every Christmas light in the North Pole, kudos must be given to cinematographer Remi Adefarasin, who already wowed audiences earlier this year in Elizabeth: The Golden Age, for flawlessly capturing the stellar production design.

Sadly though, pretty pictures and A-list stars aren’t enough to save Fred Claus from delivering a lump of coal, the bloated family film is jumbled and cynical, making whatever fun physical comedy the film features rather moot. For a Christmas film, Dobkin tried to cram far too much conflict into the picture, leaving little room for the audience to enjoy the actors’ performances.

With such a creative premise Fred Claus could have gone in several directions. The simplest route would have been to allow the conflict to build from the already established feud between Santa and Fred. With a little creative editing and perhaps a day of reshoots, not unknown to recent Joel Silver productions, the efficiency expert storyline could have been easily snipped from the film. All the elements are there for Fred to cause the story’s conflict, and to in turn learn from his own mistakes and still become the champion of this tale. Sadly though, an expensive plot device in the form of Kevin Spacey weighed down the film to a point that not even Santa’s reindeer could have carried the extra load.

While there are a few bits of physical comedy that will surely make audiences “Ho-ho-ho”, Fred Claus fails to capitalize on the potential that the creative concept promised. Even though the market for Holiday films is a bit dry this season, Fred Claus may not be the present moviegoers were hoping for. 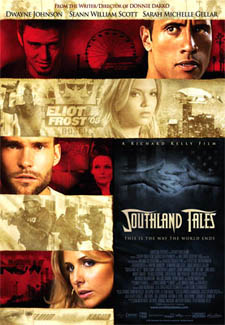 After witnessing the glorious mess that is Southland Tales it becomes obvious that Richard Kelly needs to hop into one of his time traveling worm holes and head back to film school to revisit a simple concept: telling a consistent story. While Southland Tales works in small bits, the film’s pieces never coalesce into a coherent whole.

With so many characters and subplots, the “Southland Tales” graphic novels are mandatory reading before jumping into this dense sci-fi flick. War, drugs, new technology and radical underground movements are only a few of the high brow concepts thrown at audiences. Without the context of the books, we are expected to accept all these plot points immediately upon the opening of the picture.

Perhaps one of the greatest detriments to Southland Tales is the fact that the picture has to literally catch its audience up as to what the hell is going on for nearly a whole reel. Trying to cram these ideas into the audiences’ minds utilizing news clips and preachy narration from Justin Timberlake, Kelly does his best song and dance to bring viewers up to speed. However force feeding this information feels like a cinematic cheat of a young and inexperienced director, whereas a more seasoned filmmaker would have established his own futuristic world through the characters, setting and plot.

Richard Kelly thinks in broad strokes, yet he gets so caught up in the details that by the time audiences see these grand revelations they lose all sense of their purpose. Kelly obviously wanted to make a statement on the War in Iraq, but there is so much noise surrounding the premise that you can’t help but feel overwhelmed.

Much like the films of Godard, if you try to put too much thought into any one piece of Southland Tales it is easy to be defeated by the film as a whole. That being said, Southland Tales is best enjoyed by just absorbing the absurdist nature of the narrative. When you can let go of all the eccentricities of the plot and just let the film carry you away, there are moments when the picture can be very entertaining.

Notably, the performances help make the messy structure enjoyable, especially from Dwayne “The Rock” Johnson, who literally carries the film with his charisma and charm. He brings great quirks to his character that showcases his skill as an actor. It’s not often an action star can show such range and open himself up to screwball character traits, yet The Rock accomplishes this with ease.

Kelly also draws some of the best performances seen yet by his relatively young cast. Notably Sean William Scott and Sarah Michelle Gellar stand out amongst the players, proving their acting chops against some very stiff competition: Kelly’s ostentatious narrative.

While Donnie Darko may have perplexed mainstream audiences, Southland Tales leaves them completely out in the cold. Most of the humor in the film is designed for diehard cinema buffs, featuring subtle laughs that come through style and technique, which in turn alienates the casual viewer. Kelly also goes so far as to pay homage to himself, throwing in several subtle and overt references to his previous hit, Donnie Darko.

To call Southland Tales a sophomore slump would be the understatement of the year. The problem is not with the performances or the production value, rather it lies in the fact that a young filmmaker has gone unchecked thanks to having a previous hit. If Donnie Darko was a success despite its confusing structure, then Southland Tales must work too, right? Wrong. Allowing his imagination to run amok, the pictures’ producers have let Kelly create a film that only the director will ever truly understand.