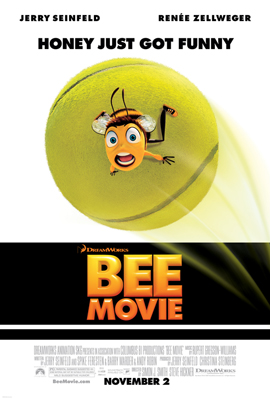 Jerry Seinfeld has been away from the spotlight for some time now and 2007 marks the year of his return – but only as a voice in a computer animated film. While the premise is unique, the approach is generic, and the excellently animated, poorly executed family film will have difficulty avoiding the already popular classification that Bee Movie is indeed a B-movie.

Barry B. Benson (Jerry Seinfeld) is an average bee approaching adulthood, who must decide upon a job in the hive. The catch is that once he chooses his job, he must keep it for the rest of his life. Unsatisfied with the monotony of working in the hive, he ventures outside where he meets a human woman, Vanessa (Renee Zellweger), who saves his life. Indebted, he breaks the Cardinal bee rule: never talk to humans. At first Vanessa has difficulty accepting the talking bee, but the two soon spend quite a bit of time together and Barry gets overly comfortable as she reveals that she is a florist. Enamored with Vanessa, despite the interspecies barrier, Barry learns that humans have been stealing honey from bees and selling and eating it. Infuriated, he sets out to sue the honey company, with the help of Vanessa and his bee pals.

Apparently bees drive cars, they are all cousins, and they can use their antennas as cell phones. The comical world the creators have devised for the bees is perhaps the most creative aspect of the film. Many parallels reside with Barry’s rebellious teen years and human childhood, as specifically referenced by a sensationally hysterical homage to The Graduate. From voting the queen bee into monarchy, to pollination, to insects on windshields and their attraction to lights, many of the typical insect behaviors are addressed and translated into humorous gags – supposedly their thinking is shockingly similar to humans.

The animation (from Dreamworks, the studio that brought us Shrek) as always continues to excel in its realism, from the cartoon movements and facial expressions of the characters, to the nearly flawless reflections and refractions of the inanimate objects and background environments. Barry gets stuck to a tennis ball and batted around in slow motion, and sucked into the engine of a car: both scenes and many more are executed with amazing editing and stunning camera movement that can only be achieved in computer animation.

Hysterical character designs and voice acting also add to the fun, with jocose performances by John Goodman, Patrick Warburton, Chris Rock and even voice cameos by Michael Richards (who many joked would play the role of an Africanized bee) and Larry King as Bee Larry King. What doesn’t work as well is the execution of the story. The film often contradicts itself with the reactions of the humans to talking bees, and with what Barry is capable of realistically doing as nothing more than a heavily personified insect. Some of the jokes elicit laughter, but most are on an unexpectedly low intelligence level, and ultimately the many entertaining bits are specifically aimed at younger audiences. As is often with computer animated films, visual perfection oftentimes overshadows the time spent trying to devise an enticing story, and Bee Movie falls in with the too-kid-friendly films that are quickly forgotten.