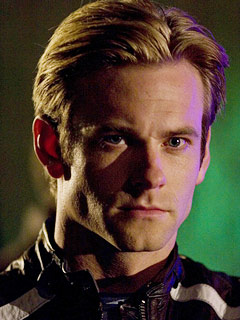 Since its premiere this summer SCI FI’s “Flash Gordon” has been an easy target for fan ire and critical pans.

But the show’s producers have asked fans and critics alike not to lose faith in the show and promised that the second half of the first season will be better.

During an interview with a group of us on-line reporters, executive producer Peter Hume acknowledged that the writing and production staff is aware of the negative comments lobbed at the series. He said the staff has taken them to heart and not become discouraged, instead using the negative comments as an incentive to work harder and make the show better for its second half of the season.

“The two big complaints were Ming isn’t strong enough or mean enough, and that it’s not enough Mongo,” Hume said. “We’re all Mongo all the time now. This show just gets more complex and actually a little bit darker, and it’s still fun and rompy, but there’s a gravitas that comes into the second part of the season that wasn’t there in the first half.”

“Well I like actually like what you’ll see coming up is you’ll learn a lot more about the Planet Mongo and how it got to be the way it is and how Ming is,” said Hume, “I like this new Ming and that he’s a really horrible guy but he’s – in a weird way he’s doing things that have to be done to save the planet.

“So at the end he’s – and he really gets better and better and his character really gets more complex. And he’s a guy that you just thing God, he’s just the most horrible person in the world. And then at the end you’ll go ooh, but maybe he had to do it that way.

“He’s just sort of the Saddam Hussein kind of tyrant but ruling a planet that may need a tyrant to be in charge. And I think the relationship with him and his daughter and the development of Aura, that’s a weird twisted relationship. I like where that’s going.”

The producer went on to say, “But just as we kind of break down and get more – a little bit more off earth and more onto Mongo and start discovering the layers and the intricacies and the politics of that planet, that – and it’s just been easier for us as writers as you know, because this show was developed quite quickly and we’ve been building it and discovering it and it’s getting more intricate and more complex.”

Hume also took time to discuss the apparent love-triangle in the series.

“They’re so weird, like she’s (Aura) so my favorite. I just think she’s just great. And there’s a weird dynamic with her and Flash. There’s weird stuff with Barin,” he said. “There’s a lot of complex triangles going on and Aura will really come into her own and sort of go from being a spoiled little girl and at the end of the season will really have to grow up and make some really hard decisions. And there’ll be some big huge twist with her at the end.”

During the conference call, SCI FI addressed the rumors that “Flash” had been given an early pink-slip and wouldn’t finish its first season.

“Yeah, no, we can put that to rest. When that popped up early on, when people would call to ask for verification, we of course corrected them. Don’t know where it came from but it was not true,” said SCI FI Publicist: Bill Brennan.

According to Brennan, SCI FI has been pleased with the numbers “Flash” is getting. The numbers saw a drop after the 90-minute pilot but have been steadily building. And the show is getting good ratings in a competitive Friday time-slot against CBS’s “Moonlighting” and the baseball playoffs. But the producer did acknowledge that ratings might have been helped by the preview episodes of “Razor” currently showing during “Flash.”