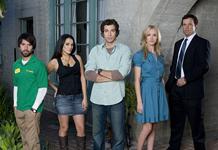 I finished watching the NBC pilot episode of the new NBC dramedy “Chuck.” I have to say that, in all of my nerdy geekiness I enjoyed the show a lot.

Like any new television show that is introducing new characters and trying to lay a solid foundation it had its awkward moments, like the way the pilot closed out in an effort to prepare the viewer for what was to be expected for the following episodes. But, apart from a few errors in judgment, I thought the pilot went well.

Of course, the best part of the show for me was the return of Adam Baldwin to television in a weekly series. He portrays a NSA agent with a license to kill, but still hasn’t forgot that Jane-like snarkiness we have all come to appreciate from his days on “Firefly” and in the movie “Serenity.”

The show is about a nerdy computer repair guy named Chuck, who, like the two main characters from the movie “Free Enterprise,” can’t seem to get to first base in dating, lacks certain social skills, but is thoroughly likeable and very funny in a way that any sci-fi geek will love and understand. And, like “Free Enterprise” the dialogue is rife with geek-driven innuendo and remarks that may fly right over the heads of less nerd-saavy viewers, but the writing, relationships and action in the show should keep them on board as well.

Chuck works at a “Best Buy” type of electronics store and is part of the Nerd Herd computer repair team. He even has his own little environmentally-friendly Nerd Herdmobile. He also has a best friend who works with him, your typical needy side-kick that is the comic relief, however, Chuck’s lines are sufficiently funny and Levi as Chuck is entertaining enough without the need for a second banana. An old college friend working for the CIA goes rogue and before being killed by Baldwin’s character, downloads, via a unique email, every secret known to the CIA, NSA and the FBI into Chuck’s brain. From that time on Chuck’s life is never the same.

At first I thought this might be another “Jake 2.0” effort, but after viewing the pilot episode I see that, while it isn’t a rehashing of that particular idea, it is a storyline that has been revisited many times over the course of television history, but one which, if the pilot is any indication, may allow “Chuck” to become its own kind of animal.