Death Sentence plays like an action film in serious need of a strong antidepressant.” 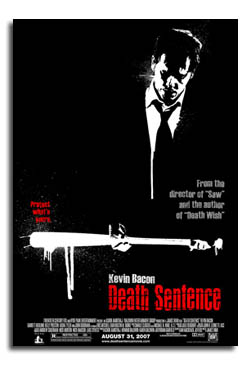 Death Sentence is an ugly, venomous film, and it’s founded on a premise so ridiculous it would barely work as a parody. Watching it only made me feel dirty and ashamed, as if I had been forced to participate in something immoral. Perhaps I was. I willingly paid for my ticket and entered the theater, knowing full well that I could leave anytime I wanted. But maybe it’s just as well; having seen it, I can warn others to avoid it. Considering that this is a James Wan film, I can’t say that I was expecting much. He is, after all the same man who directed Saw. I’m no fan of that movie, but at least it knew not to take itself so seriously. Death Sentence plays like an action film in serious need of a strong antidepressant.

The plot concerns Nick Hume (Kevin Bacon), a successful family man whose life falls apart following the murder of his oldest son, Brendan (Stuart Lafferty). The establishing first scenes could have been effective had they not been so manipulative. The film opens with home video footage of the Humes during happier days; they laugh, they play, they open Christmas gifts, and they blow out birthday candles. Is watching this footage supposed to make Brendan’s death more heartbreaking? Are we supposed to feel sorry for Nick, knowing that he’ll eventually become a crazed vigilante? And let’s not forget that (1) Brendan planned on moving to Canada to become a professional Hockey player, and (2) Nick’s relationship with Brendan was stronger than with his other son, Lucas (Jordan Garrett). I can’t help but feel emotionally swindled–not only is it unnecessary to know any of this, it’s also unfair.

Brendan’s life is cut short at an out-of-the-way gas station, where a group of young gang members kill at random during an initiation ceremony. Nick, who had been filling his car with gas, glimpses one of the members–Joe Darley (Matt O’Leary)–and later picks him out of a police lineup. Unfortunately, little can be done legally: for one thing, Nick doesn’t know which specific gang member killed his son (they all wore masks); for another thing, the gas station did not have a surveillance system, meaning Nick’s eyewitness account is all the court has to go on. At most, a deal can be made to incarcerate Joe for three to five years. As you might expect, this is clearly not good enough for Nick. He demands justice, and he demands it now.

From here on out, the film gets less and less plausible, shifting from a melodramatic tearjerker to a violent, bloody story of revenge. It begins when Nick kills Joe in a fit of blinding rage; this is seen as an act of war, especially in the eyes of Joe’s brother, Billy (Garrett Hedlund). His only solution is to kill the remainder of Nick’s family, which turns Nick into a paranoid wreck. It also turns him into a spur of the moment stuntman; without so much as an explanation, Nick is able to perform moves usually reserved for unrealistic characters in mindless action films. But this couldn’t have been an action film, simply because the story is so solemn. Keep in mind that he’s also able to use guns of various calibers, despite having never held a gun in his life. He bought them all from a shady mechanic (John Goodman), a character I didn’t believe for one second. I understand that suspension of disbelief is required for a film like this, but I’m sorry, important details like this cannot be overlooked.

But the film’s biggest problems stem from a complete lack of decency; we’re essentially watching a good man turning into what he hates the most, and not in a way that’s appropriate for the context of the story. At one point, Billy says to Nick, “Look what you’ve become. Look what I made you.” This line could have worked had Nick been willing to redeem himself. But he wasn’t; all he cared about was relieving his own pain, and never mind how it would affect his remaining family. I should think that any halfway decent father–even a grieving father–would be able to understand this. He apparently doesn’t, even after having the obligatory epiphany; “It’ll never balance,” he says. “The equation. It’s just chaos.” What? If you really think this dialogue makes sense, let’s hope it’s because you understand something I don’t.

But I guess it doesn’t matter. So far as I can tell, the sole purpose of Death Sentence can be interpreted in two ways: either it wants to glorify disgusting acts of revenge, or it wants to teach the audience that revenge isn’t the answer. Either way, this film is wrong on so many levels, failing to be meaningful, compelling, or even slightly entertaining. It only succeeds in being reprehensible, exploiting the anger, guilt, and sadness felt by those who have actually lost children to gang violence. I’m saying this from the perspective of someone without children of his own–if I found this movie awful, imagine how a parent would feel. But that’s too limiting; I should think the vast majority of the movie going public would be just as turned off by it. This is a sick film, painful to watch and even more painful to remember.