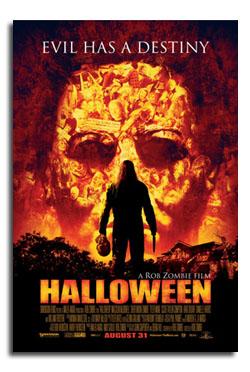 Some will say Rob Zombie butchered a classic, others will say the new Halloween is an aggressive update for a new generation. Both of these statements couldn’t be more correct. Answering Rob Zombie’s take on the nature versus nurture debate, the 2007 update of John Carpenter’s Halloween takes away the mystery behind Michael Myers, and in turn creates an uneven film that underwhelms just as often as it terrifies.

After viciously murdering the majority of his family, Michael Myers, a mere ten-year-old boy, is incarcerated in an insane asylum for nearly two decades. Upon the eve of his transfer to a maximum security prison Myers breaks loose to return home on Halloween to finish the job he started, wreaking havoc on anyone and anything that stands in his way.

Zombie, who quickly became a cult favorite with his aggressive style and nods to grindhouse cinema, has certainly injected a great deal of himself into his update of Halloween. This time around the filmmaker has given us a far greater glimpse into the history of Michael Myers. No longer is the character just an unstoppable juggernaut, but now he is a monster with a motive.

With a past that is filled with Zombie’s trademark, trailer park trash characters and dialogue, the director attempts to create sympathy for Michael. Zombie wants the audience to believe that Michael’s actions have not been made by choice alone, but that it was his twisted upbringing that drove the character to violent murder.

In his previous films, like The Devil’s Rejects, the director managed to make his characters so despicable that when they finally met their demise there was a cathartic release in the audience. Had Halloween not forced the background of Michael Myers’ character into the first half of this lengthy horror epic, this might have been the case yet again. However, since Rob Zombie’s Halloween is very much Michael Myers’ story, it’s as if the director wanted us to feel this character’s angst, rather than sympathize with the victims.

The relentless viciousness of Myers creates a hypocritical flaw within the film. If we are to sympathize with Michael, like Zombie so obviously intended, we need to see a hint of human emotion in the character. Having Michael mow down everything in his path, including characters that had been quite kind to him throughout his tormented childhood, does not help Zombie create a very likeable protagonist. As a result the audience’s emotions are left within a vacuum, with no central character to pour our hopes and fears into.

While the production value is executed with the sharpness of Myers’ signature dagger and Zombie’s music cues are yet again pitch perfect, Halloween is nothing more than a series of violent images crammed into a flawed and contradictory screenplay. While the first half of the picture feels like a Rob Zombie film, and the latter part certainly does a nice job ratcheting up the intensity of a Halloween picture, there is only one thing this new adaptation will accomplish, it will leave you dying to watch the original.