MoviePulse’s Joe Russo was one of the many members of the press that got to see a first look screening of the new Robert Zemeckis/Neil Gaiman film Beowulf. He gives us his take on the day and the viewing. Joe also got to spend some time with controversial director/producer Uwe Boll and his new film Postal. 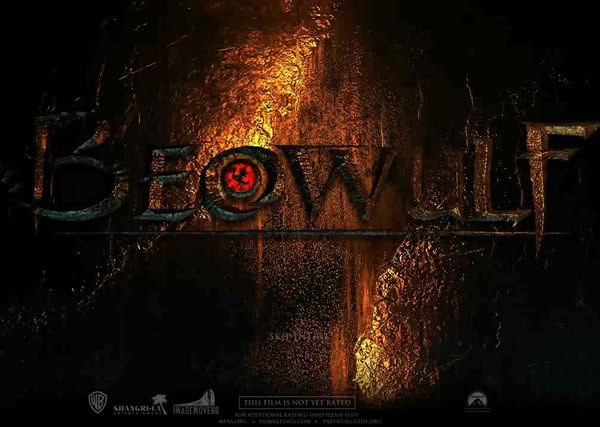 As the first audience to see any footage of Robert Zemeckis’ Beowulf, screenwriters Neil Gaiman and Roger Avary warned the audience filled with press to prepare for what would feel like an “acid trip”. If they meant a drug induced euphoria that was absolutely mind blowing then their description couldn’t have described the preview any better. So what did we see? An intense, action filled teaser. A trailer that will have you salivating for more and a second reel that was probably one of the most frustrating sequences I have seen all year. Why? Because we still have until November to wait to see the rest.

For the biggest 3D release of all time, Paramount is certainly banking on Beowulf to help “keep the movie going experience alive” and give audiences “a reason to go to the cinema”. The film, which was entirely shot with motion capture technology retells one of the oldest spoken English stories using the most advanced form of storytelling imaginable. One of the first films to be designed from the ground up with three dimensional storytelling in mind, we were privy to an exclusive second reel in which Beowulf has slain a deadly monster and encounters a far more dangerous one, a motion captured Angelina Jolie that will make audiences understand why the tabloids say Brad is afraid to double cross her (and she is almost naked).

Following the amazing footage, the writing duo opened up questions to the press. Avary opened by saying that if Zemeckis calls, make sure to answer. They both agreed that it was as if the director had reached inside their minds and pulled out this highly stylized version of Beowulf. Gaiman described the three dimensional feel like being inside a graphic novel. They discussed how the writing process, which began for the duo back in 1997, hit quite a few snags along the way. One in particular was how to age the title character by 50 years without jeopardizing the credibility of the movie. Zemeckis’ mo-cap technology turned out to be the answer that they needed, which Gaiman described as Shakespeare being performed by the cast of Tron. The Beowulf writing team felt that the film will score a PG-13 rating, though it features incredibly graphic sequences of violence and gore. When asked if Gaiman and Avary would be working together again they seemed next to giddy to announce that they were adapting a feature film from Charles Burns’ Black Hole.

The highlight of the night was sharing quite a few drinks with Brandon and Neil Gaiman courtesy of Paramount. Gaiman told us that he was absolutely frustrated about having to wait to see the rest of the film. He wanted desperately to show the audience tonight the whole picture. We reassured him though that we had seen enough to make November seem like a long time from now and he laughed. He said that the team will be working right up until October to finish, but he thought it would be amazing. As for Stardust, he told us to push the film as much as possible and to get the word out there. So you heard it from us folks, Neil Gaiman wants your butts in the seats! 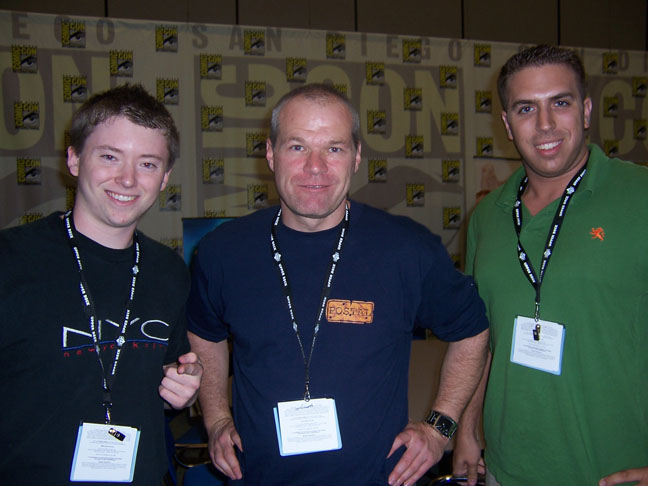 An Afternoon with Uwe Boll

If there is one director working today that is more notorious amongst film fans than the German director Uwe Boll, I would like to meet him. However what is going to shock audiences familiar with the German director’s work is that he has seemingly improved as a filmmaker by leaps and bounds with his latest picture Postal, opening in theaters on October 12th and as Boll joked, out by October 14th.

Treated to several exclusive minutes on perhaps the crappiest television set at Comic-Con, both Brandon and I were equally impressed with not only the great production values in Postal, but how funny it was too. In the first scene, two Al Quaeda members argue before committing an act of terrorism for Osama Bin Laden about how many virgins they will have in the afterlife. In the second scene we watched the film’s star, Zack Ward, move up in a DMV-like line by picking up the tickets of victims that succumbed to the violence of a customer gone postal.

Sadly the third scene wasn’t shown because the sound quality on the television was so poor the Vivendi reps felt it would damper Uwe’s ultimate vision. Following the clips we were treated to a Q + A with the director, Zack Ward and Jackie Tohn. Boll spoke of how Postal harkens back to action/comedies like Blues Brothers that are fueled with political satire (A popular European take on Landis’ film). Postal stemmed out of Boll’s frustration of the fearfulness of the entertainment industry to take risks on controversial projects. In the film he pulls no punches (don’t worry he didn’t box any critics this time) going so far as to show violence involving children, something that he said Canadian audiences really got a kick out of.

When asked if either George Bush or Bin Laden was the film’s villain, Boll replied that it was actually the silliness of rules that Postal is attacking, not so much 9/11 or the war on terror. He also added that it is coming at the right time, when the country is fed up with Bush; something he thinks helped the film earn an R rating. This surprised Boll, as he thought the controversy, which is the true star of Postal, would have put off the MPAA.

Zack Ward described the 15 million dollar production to be “funny as f@ck.” The actor also told a humorous, yet incredibly over-the-top antidote about how he became involved in Postal. Ward, who you probably will best remember as the bully from A Christmas Story, joked that after Uwe had been stalking him online the duo had a romantic date where the good doctor professed his love for the actor and made him sign a contract in blood. In actuality Ward landed the part by audition, stating that he was obviously the best. Boll quickly countered saying “not according to the test screenings”.

In response to critics and the recent backlash against violent films Boll had quite a bit to say. He said that serious critics love watching dramas that involve “people sitting at a kitchen table and talking” and that they do not appreciate true genre films. He joked that studios then buy up these films with glee, but “sixth months later are trying to figure out how to sell the piece of shit that they bought”. Boll said that the truth is that to sell a film to the foreign market, where pictures make a nice chunk of their theatrical and DVD returns, you have to include violence and sex, otherwise they just won’t buy it. Zack Warden specifically called out these film critics and challenged them to “do something with themselves for once” and try actually making a movie instead of judging them before watching them.

While Postal doesn’t seem like it will be a film that will sit well with the conservative American public, it is the first film the director feels that he wouldn’t change a thing. He feels that the poor reviews of his previous films have caused him to reexamine himself as a filmmaker and he has spent far more time in preproduction on his recent films. This, he feels, helps him to continue to improve as a director and that he enjoyed doing an action/comedy. His enthusiasm for the project was surprisingly contagious, just about everyone left the room impressed with what they saw. Could this be the beginning of a new Uwe Boll?