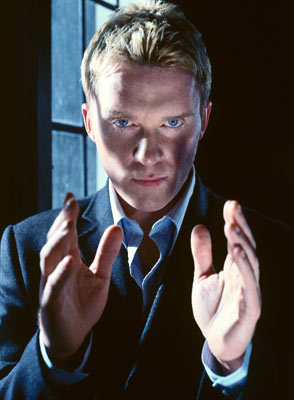 This Sunday, July 1, 2007 at 10/9C on the USA Network “The Dead Zone,” the hit series starring Anthony Michael Hall (“61*,” “The Pirates of Silicon Valley,” “Sixteen Candles”), continues its sixth broadcast season with a special episode, “Re-Entry,” where Johnny (Hall) must set aside his distrust of Vice President Stillson (Sean Patrick Flanery) in an attempt to prevent a national disaster. With bold special effects, Johnny’s vision of the space shuttle and his journey into space is brought to life. “The Dead Zone” is based on characters from the Stephen King novel. 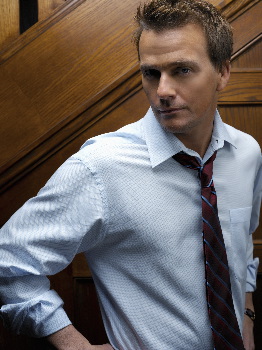 Sarah (Nicole deBoer) and Johnny take JJ (Connor Price) to hear Vice President Stillson (Sean Patrick Flanery) speak about the new generation of space exploration. When Stillson shakes Johnny’s hand following the presentation, Johnny is hit with a vision of trouble aboard a private space mission. Snapping back to reality, Johnny alerts Stillson, but the vice president publicly dismisses his warning. Meanwhile, Sarah, who is now eight-and-a-half months pregnant, pretends not to notice the nasty glances and whispers by the other parents as they gossip about the ongoing investigation of Walt, and the fact that she and JJ are now living with Johnny. That evening, Stillson arrives at the Smith home with a liaison from Gospace, the company that launched the space mission Johnny saw in his vision. The Vice President reveals that they desperately need Johnny’s psychic abilities because they have lost communication with the astronauts. Can Johnny help avert a monumental disaster — and do it before Sarah goes into labor?