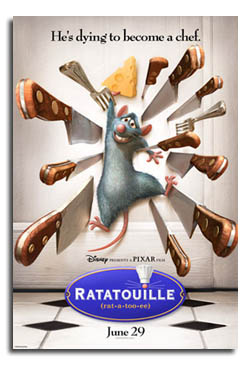 An astonishingly unconventional plot brings audiences to the streets of Paris where an anthropomorphic rat aids a floundering chef in cooking superlative cuisines in Pixar’s Ratatouille. Thanks to director Brad Bird and his masterful direction, we’re sucked into this exquisite story. With breathtaking animation as only Pixar can provide, nonstop comedy, James Bond-esque chase sequences, and wildly caricatured characters, Ratatouille is easily one of the best films of the summer.

Remy the rat (Patton Oswalt) has an unusually refined sense of smell and taste and quickly aspires to eat only the finest foods as opposed to rifling through garbage and stealing food like his family regularly does. His father warns him of the dangers of humans (they are dangerous to rats as well as merfolk) but during a rapid escape from their compromised home, Remy is separated and lost down the unforgiving tunnels of a sewer. When he finally clamors to the top, guided by his role model’s ghostlike guiding spirit (the late, great Chef Gusteau) he realizes he’s in Paris and right next to Gusteau’s five-star restaurant. Determined to live his dreams of becoming a chef, he saves a recently hired, bumbling garbage boy named Linguini (Lou Romano) from disaster and embarrassment, and forms an unlikely partnership. Remy puppeteers Linguini (while hiding under his toque) making him appear to be a talented chef. Linguini’s suspicious and conniving boss Skinner (Ian Holm) and the specter-like food critic Anton Ego (Peter O’Toole) are the only two who stand in their way of living their dreams and proving to themselves and their families how the most unusual circumstances can lead to success – and that anyone can cook.

A classic example of Pixar’s signature ability to select the most inspiringly unique stories as well as to throw conventionality out the window, Ratatouille makes use of extreme contrasts in its principal ideas. A rat, typically despised — especially in the kitchen — unites with a human to live out his dreams as a chef. The plausibility of this contrary scheme is low, but with the amazing character development we’re sucked into the fictitious world that is so vividly painted onscreen. On an unrelated note, Pixar once again tacks on an animated short film to the beginning of the feature, this time a science fiction piece entitled “Lifted”, which beautifully sets up the mood for Ratatouille’s stellar story.

Several noteworthy contrasts and singular ideas surface consistently throughout Ratatouille. Similar to Toy Story, in which the toys don’t allow humans to notice their anthropomorphic qualities, the rats in Ratatouille keep their actions out of sight. They squeak when they talk (from human perspective), yet they ride boats during an escape, and Remy can read books. Are they unable to achieve human characteristics when humans aren’t present? Technical contrasts exist in the editing and cinematography, including humorous transitions from Colette’s face to that of Ego’s malicious grimace, and rapid night-to-day cuts. Often overlooked and yet perhaps the most stunning aspect of the film is the way the camera moves: dollies, pans, and chases that carefully follow movements perfectly mimic the way a camera is used in live action, yet there are no real cameras at all. This perfect mimicry of actual cameras allows the viewer to follow the events of the CG characters exactly as if they were real, which of course adds to the precision and naturalism.

All of the visual aspects of the film are absolutely praiseworthy. The photorealism of textures and environments continue to be near perfection and, in typical Disney fashion, the lead characters are crafted as caricatures and have exaggerated cartoon qualities. Gusteau, Linguini, Colette and the rest of the kitchen staff are all creatively skewed from standard human dimensions and proportions, while the inanimate object all remain realistically fashioned. But this familiar contrast in animated films helps emphasize the nonstop comedy and cheerful tone that permeates every scene. And most often the comical scenes involve a frantic, fast-paced chase through sea, land and air, much like James Bond’s notorious opening sequence stunts. Director Brad Bird’s tight direction keeps the action as intense and unpredictable as the jokes are funny.

Full of wonderfully inventive ideas, from placing a rat in the kitchen, using Gusteau’s spirit as a guide (who regularly admits to being a mere figment of Remy’s imagination), to the wonderfully caricatured cast, Pixar has itself another winner. Despite the unexplained language barriers and farfetched plot, this delightfully delicious film doesn’t ever become too preachy or too immature and always maintains a high level of pure entertainment.