The gang at Fanboy Smackdown have given us two reviews for the price of one – and since they are free, that is a price hard to beat. Darren takes a look at the latest Fantastic Four flick and the thrilling Day Watch. 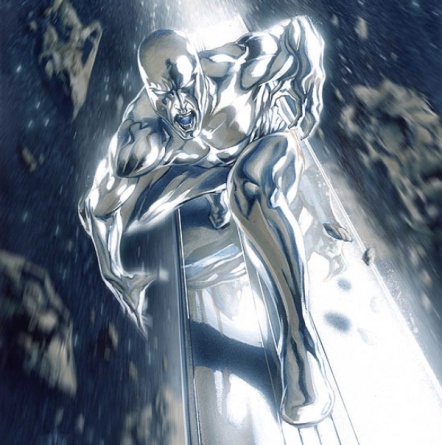 Something from outer space is making it’s way through the galaxy and devouring planets in it’s wake, it’s on a course for Earth and it’s being preceded by a strange silver-glazed being riding what appears to be a surfboard. On Earth, The Fantastic Four have become huge public eye stars for their fantastic exploits, and now we’re just days away from the wedding of Reed Richards and Susan Storm. The Surfer makes his appearance on Earth, causing calamity in his wake, leaving the US military to get in touch with the Fantastic Four to help devise a way to at least figure out what this isâ€¦ And inadvertently, through his own power after effects, the Surfer revives Victor Von Doom, who wants nothing more than to gain the power of the Surfer for himself.

And that’s the basic premise of Fantastic Four: Rise of the Silver Surfer which so far for me is the best of the Marvel Comics movies to come out this year. Now I really liked the first film too (even more so now that there’s an Extended Edition out there) and one of the big reasons that I liked this, is that by the nature of the Fantastic Four comic itself, these films don’t come in and get as heavy as say Spider-Man movies do, or Batman, or even something like Daredevil. The Fantastic Four should be more fanciful, more whimsical than the other comic movies out there, and I think they’ve certainly succeeded with both of them thus far.

There’s lots of nods to the comic here, although there’s lots of stuff that’s also going to really piss off the internet-vocal fanboy crowd as well- in particular the portrayal of Galactus in the film, which still to me is more vague than “just a big cloud.” There’s a space in there where there could’ve been a little something more shown, but I ain’t gonna hold that against the movieâ€¦ and I certainly can understand the decision to not show Galactus in his traditional sense, simply because they’re wanting more than just the fanboy element to like the film and I’d tend to think that the mainstream audience seeing a building-sized humanoid wearing a Jack Kirby designed purple helmet might not take it the way it should be taken (although again, there is a moment where there could’ve certainly had been a compromise between the two- which I could see being opened up a bit in what will probably be the inevitable Extended Edition of this film).

Director Tim Story and his crew have certainly made some changes along the way, compared to the first filmâ€¦ this one is way more effects-heavy and I tend to think for the most part they’re all pretty cool effects, especially when you’re dealing with these characters in particular who’s entire bodies are pure effects. The make-up for the Thing has really been improved on, particularly around Ben Grimm’s upper body and his browâ€¦ to me, it really allows Michael Chiklis to actually perform better. And finally, a character that’s been talked about for film ever since 1980 (when someone connected to Olivia Newton-John- this was around the time of Xanadu- had the option on the Surfer) has finally made it to film and fulfilled some promise that effects movies like Terminator 2 promised you could see. The Surfer is really nicely done here- acted out by actor Doug Jones and voiced by Laurence Fishburne, he’s a true commanding presence in the movie.

But I don’t at all want to slight the four leads- Ioan Gruffod, Jessica Alba, Chris Evans and Michael Chiklis all reprise their roles and they’re all real comfortable with each other on-screen. There’s some moments near the end of the film where that chemistry is really evident and you do buy that they’re a family. I’ve got to give some huge marks to Chris Evans here, who gets to give Johnny Storm a lot more depth than he’s had before and still have fun with the part. Also returning is Julian McMahon as Doctor Doom, and again, he’s obviously having a real ball with the part. New to this cast, and continuing the trend of hiring FX TV series actors for this movie is solid-as-a-rock Andre Braugher as the general who gets in touch with the Four (I figure Denis Leary must be the next in line to get a part in the film- no doubt looking both tortured and sardonic at the same time)

Out of all the big Marvel Comics movies this year, this was the one that I was looking forward to the most, and for me anyway it delivered the goods. On top of that, again I got to see this in digital projection and as such that made the viewing experience even more special. I’d say that if you liked the first movie, I’d definitely recommend this film. But if you got your nose all out of joint over the first one, you should probably just stay home, there’s probably not much that this one is going to do for you. And if you’re the type that’s gonna get real steamed off that Galactus ain’t a big guy in a big purple helmet, don’t go at all and don’t forget your helmet when you leave the house. 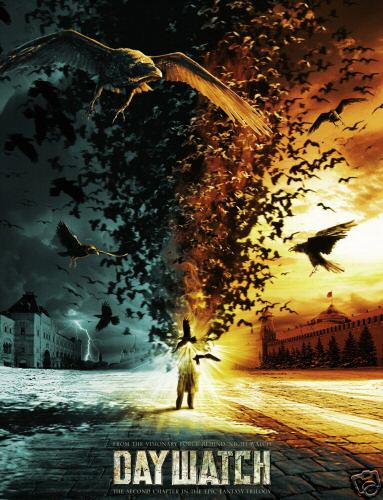 Just a little preface before get into the review proper, Day Watch is the second in a trilogy of Russian movies that started with the film Night Watch. Night Watch, which is steeped in Russian legend, tells us the story of the eternal battle between Light and Dark forces and the pact struck between the two when it appeared that the only way the battle was ever going to end was going to be the destruction of both. Vampires, shape shifters and more supernatural beings are real in the world, but ruled over by the light and dark forces, each of which has their own sort’ve police force to keep the other in check, the Light’s force is called The Night Watch and the Dark’s is called Day Watch. Night Watch told the story of Anton, a young man who forever alters his life by employing Dark forces to do a deed for him, and thus awakening his own supernatural powers. Anton becomes a member of the Night Watch and becomes involved in a series of events that awakens two beings, one called the Great Light Other and the other, the Great Dark Other and legend foretells that if the two should ever meet, it will be the end of everything that we know.

Day Watch continues the story, with the Great Light Other, Sveta, now in the employ of the Night Watch, and the Great Dark Other, Yegor now training with the Day Watch. This story throws into the mix another legend about an object called The Chalk of Fate, which when used, can literally reverse whole events. Both forces want the Chalk, with the leader of the Dark forces, Zavulon wanting to break the pactâ€¦

â€¦ and as always, there’s way more to tell, but I’d just as soon you discover the rest for yourself. Night Watch is an incredibly cool movie, yes it’s story and history is complex, but as long as you stick with it, it’s all pretty easy to follow and very easy to get involved in. Day Watch is just a little more complicated and quite a bit more all over the map, seeming at times to try to also go into some high comedy before winding up with a very intense ending. Because of the nature of The Chalk of Fate, this ending could almost be seen as a cheat, but yet it’s not as much as say something like a movie like the Nicolas Cage film, Next is.

It’s an amazing looking movie, as is Night Watch with special effects that rival anything made here, and to me anyway, Night Watch was always more the type of movie that I wanted something like Underworld to be like, but instead that fell into a series of cliches that you’d seen many times before.

Day Watch re-unites the entire cast of the first film under the same director, and please forgive me, these Russian names are hard for me to remember, so I’m just going to forego even trying to name names. But the cast is quite good, and I’m quite impressed with a number of the characters, in particular, Anton, Sveta (truly a stunning woman), Zavulon and Olga (who is a shape shifter and Anton’s partner in the Night Watch).

It’s an interesting film, but like I said above, it’s ending might be seen as something as a cheat, especially when you think that this is supposed to be part of a trilogy, yet things are wrapped up pretty nicely by the end of this film.

Really though, the only way that I can recommend Day Watch though is only if you’ve seen Night Watch. Day Watch does open with a prologue that explains everything from the first film, but still seeing the first film itself carries a lot more gravity with it and arms you much better for the second movie than just the prologue itself. Well worth seeing though, if you’ve seen Night Watch, but still the ending might leave something to be desiredâ€¦ we’ll just have to wait and see if this continues further beyond this.