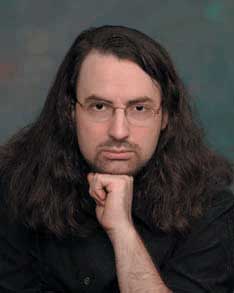 Movie Talk: IMAX is becoming the new craze for Hollywood producers and directors lately. The next big film to tackle the hi-tech IMAX format will be Chris Nolan’s Batman: The Dark Knight.

TV Talk:
We address the concerns of viewers over the British tabloid “The Sun” and its insistence on reporting the demise of “Doctor Who” and its two top actors. The BBC has assured us that the show and the cast are very stable. Also on tap is a look at the return of the surprise ABC Family Network hit show “Kyle XY.” It returns on June 17 for a second season of all new episodes.

Slice of SciFi, in conjunction with the ABC Family Network, is holding a “Return of Kyle XY” contest. Be sure to follow the rules to have a qualifying entry!

Interview: This in-studio interview with acclaimed fantasy author Jim Butcher originally aired on Dragon Page “Cover to Cover” back at the end of April 2007.

Much of the talk focuses on all the current incarnations of The Dresden Files, Season 1 which aired on SciFi Channel, the hopes for a Season 2 and beyond, and plans for the book series (20 case files for Harry to survive!)

Jim also tells us a bit about how the universe for his “Codex Alera” series came into being. Think “Lost Roman Legion meets Pokemon”.

Future Talk:
Coming to the theaters this Christmas season: the sequel to AVP entitled Alien vs Predator 2, and the more family oriented fantasy adventure, The Water Horse: Legend of the Deep.