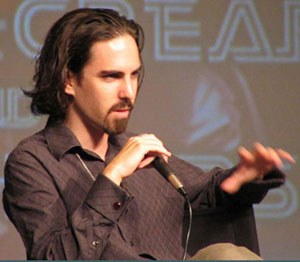 Movie Talk:
“Rise: Blood Hunter” is the latest film from the producers of “The Grudge”, and Sebastian Gutierrez (writer of “Gothika” and “Snakes on a Plane”). Starring Lucy Liu and directed by Gutierrez, “Blood Hunter” is stylish B-movie romp full of sexy vampires and blood-soaked vengeance.

We also discuss an Entertainment Weekly “best” SF shows and films of the past 25 years. We so disagree with a great deal about this list, from the entries on the list to the order of items on the list.

Interview: Noted composer Bear McCreary joins us this week to talk about his experience composing and recording the amazing score for SciFi Channel’s “Battlestar Galactica”, and the upcoming second season of “Eureka”.

Future Talk:
In its first season, SciFi’s hit series “Eureka” got a lot of milage out of the love triangle between Nathan Stark, Allison Blake and Jack Carter. As the first season ended, Allison had replaced Stark as the head of the secretive Global Dynamics and the potential romance between Allison and Carter was left to simmer during the hiatus.

“Eureka” returns for its second season on July 10.