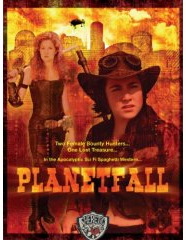 Indie filmmaker Troy LaFaye of Minneapolis-based Carschool Film-O-Rama sent “Slice of SciFi” a couple screener copies of PLANETFALL, a low budget scifi action movie that was shot and edited over a 4 year period, beginning in 2001 and ending in 2005, and culminating in a DVD release from Heretic Films in 2007.

Michael started watching the movie, but couldn’t finish. Summer watched it, but had some minor and not-so-minor quibbles. Sam watched it three times, to get his bullet points for the review of the movie to his liking, a review you can hear in Slice of SciFi #99.

What a few of us saw as a great attempt that might have gone a little astray turned out to be an award-winner: PLANETFALL won a bronze medal in 27th Annual Telly Awards in the “low budget” category (films made for less than $700/minute).

Having already shown the grit and determination needed to continue making a film over a four year period, it came as no surprise that Troy wanted to take a moment to let the makers of PLANETFALL be heard. Seeing as how “Slice of SciFi” has been a supporter of indie films over the years, could we really refuse?

In a conference call with Troy LaFaye, actors Heidi Fellner, Leitha Matz, Alan Struthers, Charles Hubble, prop maker Gordon Smutter and writer Michael Heagle gather while Michael R. Mennenga, Summer Brooks, Brian Brown, Michael Stackpole, Tim Adamec and Sam Sloan ask some questions about the film directly of the filmmakers, to dig a little deeper into what went into making the movie, and how maybe the finished product didn’t quite reach up to the intent behind the impetus to make this movie.

Sit back and enjoy.