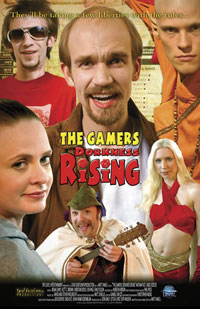 Movie Talk:
If you are tired of all the big explosions, monsters around every corner or starships whizzing by at faster-than-light speed, and want to watch a quiet but entertaining and delightful film then “Miss Potter” may be what you are looking for.

This film is about Beatrix Potter, wrote and illustrated some of the most beloved children’s fantasy and fable books of the 19th & 20th Century. Her famous characters ranged from Peter Rabbit, Mrs. Tiggy-winkle and Jemima Puddleduck.

The miniseries can be seen on BBC America, and is also available on DVD.

Interview: Michael and Summer talk with writer/director Matt Vancil and executive producer John Frank Rosenblum of Dead Gentlemen Productions about their latest project, “The Gamers: Dorkness Rising”. If ever there was a project that would appeal to geeks, this is one: a parody of gaming adventures and fantasy films all rolled into one.

For those who need to catch up before seeing the latest chapter, you can obtain either the original cut or the director’s cut on DVD.

Future Talk: What’s Coming Up?
“Sin City” and “Grindhouse” director Robert Rodriquez with partner Elizabeth Avellan are set to produce a big screen adaptation of the Harvey Award-winning “Madman” comic series for their Troublemaker Studio. They have hired “Swimming With Sharks” director George Huang to helm the project. Also involved with the production will be Bob Weinstein and Richard Saperstein from Dimension Films who will distribute the finished product.