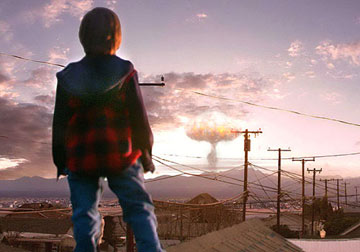 LOS ANGELES (Hollywood Reporter) – With world attention focused on the nuclear ambitions of rogue states like North Korea, one might assume that the producers of CBS’ promising new drama “Jericho,” which deals with the aftermath of a nuclear attack, are merely playing on Americans’ fears.

“Jericho” executive producer Jon Turteltaub does admit that a bit of real-life worry over an attack helps make the show more compelling.

“If people had no fear of nuclear bombs, then this show would kind of suck,” he says. “But if America was in a panic over nuclear bombs, we probably couldn’t make the show.”

Turteltaub’s intention isn’t to prey on that fear in the name of easy scares. Instead, he aims to create intriguing stories that come via an examination of the way that the different characters — survivors left isolated in a small Kansas town — react in a crisis situation.

“I think what we have all really focused on is less the nuclear message and more of the sociology of how to behave when everything goes wrong,” Turteltaub says. “Most of us are pretty wonderful during the good times, but our true character comes out when we’re confronted with tragedy and disasters. True leadership appears, and really hard choices have to be made.”

It’s those choices — many of which have arisen as a result of “societal conventions being stripped away” — that intrigue Turteltaub, a feature film director who shot the Nicolas Cage hit “National Treasure” and next directs its sequel, as he gets deeper into his first foray into television. “Jericho,” which recently received a full-season order, came out of a deal that CBS signed with Turteltaub last year. Jonathan A. Steinberg, Josh Schaer and Stephen Chbosky are credited as creators.

“I like ideas where when I hear the initial part of an idea, it brings up thousands of other thoughts,” Turteltaub says. “This spawned a rash of other ideas — everything from the fact that all of life would be changed by this event through where life doesn’t really change at all if you live in small town and are already removed from the nonsense of a big city.”

Another factor that appealed to him was that nuclear war hadn’t been part of film or TV in some time, and even when it was, the stories had tended to deal with trying to stop a bomb from exploding rather than the fallout from an attack — which, despite what’s going on in the real world, ultimately makes the thought of a real-life “Jericho” even more frightening, he says.

“When we see a suicide bomber on a TV show, we think it’s a sign of the times,” he says. “But when we see a nuke explode, we think: ‘Holy crap, where did that come from? That doesn’t happen! TV and movie stars always stop the bomb with two seconds left on the timer — they don’t actually explode!’ In this show, they do.”