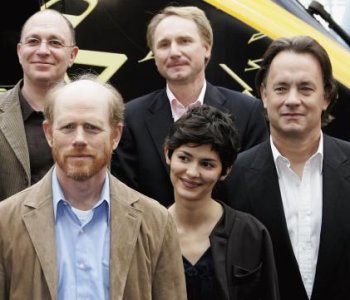 If you do not have plans to see the Ron Howard film, “The Da Vinci Code” starring Tom Hanks, then I strongly suggest you reconsider that decision. While this is a film one will definitely want in their personal film library, it is not one to wait and see only on DVD. This movie must be seen on the big screen and shared with a large audience. It is a community experience.

Despite the much touted wranglings going on within certain religious circles about this movie (and the book it is based on) and its “supposed” implications, “The Da Vinci Code” is truly one of the most impressive cinematic creations yet to have come from the genius of director Ron Howard. And, with his impressive resume’ of filmmaking that is saying a lot.

Also, don’t believe all the hype coming from the press over the last several months about Hanks being miscast as linquist/symbologist Robert Langdon, the lead character in Brown’s novel. Hanks, under the guiding hand of Ron Howard is the only actor who could have played this role in such a powerful, yet understated and subtle way. He leaves you realizing that his character is pivotal yet not the center of the film’s attention, and I believe, only someone like Hanks, the consummate professional, could have pulled that off without letting his own ego slip into the part.

Under the insight of Howard the film, while taking several shortcuts from Dan Brown’s bestselling novel, keeps the audience on the edge of their seats with a whole array of mystery, intrique, and suspense in the same manner that reminded me of the early days of Alfred Hitchcock and Orson Wells, but without a pace that leaves the audience behind, which Wells was so apt to do in his masterpieces.

This film was everything that Mission Impossible III was not. It certainly had its share of murder, sinister plots, unsuspecting twists, some real action, plenty of gun play and always lingering in the shadows of your mind was the thought, “Could this possibly be more than just a movie story?”

For two-plus hours the audience is transported to a place they rarely get to visit much any more in theaters, a land where the full scope of entertainment can be had for the price of a ticket and a box of popcorn that doesn’t insult one’s intelligence along the way.

My recommendation? Go see the movie. Then go again. When it comes out on DVD — buy it!