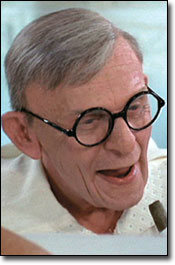 Shrouded by memories of better times and better movies, Frank Gorshin and Rodney Dangerfield’s final screen appearances are unfortunately in the thoroughly hapless and embarrassing comedy, “Angels With Angles.”

Title alone tips off pic’s lack of laughs, despite some earnest character acting from the likes of David Proval and Henry Darrow, who somehow signed onto a film that posits an angelic George Burns trying to redeem a guy caught up in Cuban cigar smuggling. Premise isn’t half as unwieldy as the playing, and after a single week Los Angeles run, this one will quickly become an obscure trivia item.

In order to earn his wings in Heaven and once again team up with Gracie Allen, George Burns (Gorshin) is assigned by God (Dangerfield) to redeem a hopeless human named Shoomie (writer-director Scott Edmund Lane). Burns’ encouraging of the sad-sack to reunite with his shady pal Howie (Proval) proves ill-advised, as it gets Shoomie involved in a ridiculous plot to separate Castro from some of his prized cigars. Gorshin’s Burns is genial and precise, unlike, sadly, his second role as an insanely hyper CIA spook.