Do you like STAR TREK? Do you dig the blues as a music style? The Enterprise Blues Band is a mind-meld of both art forms.

It all began in the mind of veteran STAR TREK actor Vaughn Armstrong (Admiral Forrest). An avid blues musician in his own right, he decided to wile away the dead-time between takes on the STAR TREK: Enterprise set with impromptu jam sessions, which he began incorporating in his convention appearances. 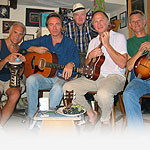 Armstrong began gathering around him fellow STAR TREK actors/musicians. Before he knew it he had been joined in his home studio by the likes of Casey Biggs (Damar), Steve Rankin (Col. Green), Richard Herd (Admiral Paris), fellow actor William Jones and Visual Effects Producer Ronald B. Moore. They put together an eclectic musical mix of old-style pickin’ blues and folk. What started out as a relaxing tension breaker on the convention floor and set soundstage has turned into a full blown blues touring group.

Their first self-titled CD of blues music is doing quite well on the concert and convention circuit. What is unique about this CD is that each song has fun with the STAR TREK franchise, but in a respectful way.

The Enterprise Blues Band CD can be purchased at the EBluesBand Website.

If you are fortunate enough to catch these guys on tour or at a convention you can grab yourself an autographed copy. I recommend that you hold on to it because it will become a valuable collectible.