That love story, bathed in magnificent photography, is a slow-paced look at a growing relationship between two people. It is an absolute joy to behold. 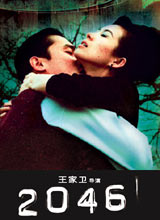 If you missed that fine film, I have two pieces of good news for you: It’s now available on DVD, and there is a sequel, 2046 starring Leung, Cheung and Gong Li, the incredible actress noted for such films as Raise the Red Lantern and

In still more good news, the sequel is not just more of the same, in terms of the romance in the earlier work. Instead, 2046 is part science fiction, part political treatise and fully a study of human relationships. The title comes from the number of the hotel room where Chow Mo Wan (Leung) and Su Lizhen (Cheung) met as lovers in the earlier story, and it is also the year in which Hong Kong will become fully part of China.

In 2046, Chow Mo Wan has become a pulp-fiction writer and something of a womanizer. Sometimes what we see on the screen is a product of Chow’s writings and sometimes his memories. And sometimes we see the reality of his life as we are introduced to six women who have been important to him at one time or another.

A little hard to follow, 2046 still a beautiful film to behold. I think seeing the previous film first might be of some help, but I can’t say that for sure. I saw In the Mood for Love in the theater when it was first released, and then on DVD a couple of months ago, and I will confess to still being lost at times in the new film.

By admitting to this, I am not trying to talk anyone out of going to see 2046. It was a rewarding experience, even if I didn’t understand it all. I’ve had the same trouble with some Ingmar Bergman films, but that doesn’t didn’t keep me from enjoying that great director’s work. It’s like reading books on quantum physics: I don’t get it all, by a long shot, but I sure enjoy reading on the subject.

China continues to have one of the most vibrant film industries in the world, and part of that vibrancy is due to groundbreaking directors such as Kar Wai Wong, who directed In the Mood, 2046 and the acclaimed Chungking Express. According to the Internet Movie Database, he may be doing a remake of Orson Welles’ The Lady from Shanghai, with Nicole Kidman in the title role. Can’t wait!

I encourage you to go see 2046, and just sit back and let it flow over you. You won’t be disappointed.