Well sci-fi kids and Browncoats everywhere, I just walked through the door after sitting in the theater and watching the USA opening day of Joss Whedon’s “Serenity.” One word: WOW!

If you have yet to see it, then do not read on from here because there will be spoilers galore. 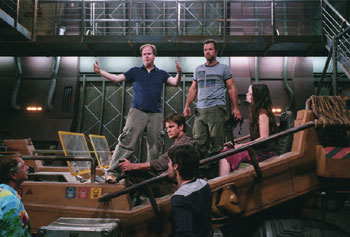 Whedon has done it. Taken a fabulous short-lived TV show that only aired 11 episodes before getting its plug pulled and turned it into a mega-super box office sci-fi hit.

The movie opens with a back-story about River and her brother, finally explaining to the initiated how he rescued her and what she was really being rescued from. For the virgin viewer who never saw the TV program “Firefly,” Whedon weaves a perfectly blended fabric of then and now so that right from the start you will not be lost and are sucked right into the story at its current point in time, without needing the TV 11 episode arch to rely on. For those of us who saw the TV show, everything begins to fall into place and many unanswered questions are brought to the fore.

The humor and banter between Mal and his crew is still present, but Whedon carefully crafts it in such a way that it does not become the center point of the plot, because there is some really scary and serious stuff constantly going on to them and those they come into contact with.

The origin of the Reavers are made known and the manipulation of the Alliance in that birth is made manifest so that even the truest believers in the Alliance doctrine will be given pause.

I was upset that Whedon decided to terminate the existence of two of the Browncoat’s favorite characters in the movie. They will certainly be missed, as I found them to be one, the comic relief of the crew and the other the spiritual and emotional stable rock that Mal and his discontents so badly need. In fact, I was not totally surprised at the death of the latter, but the demise of the former completely took me by surprise and it really broke my heart.

This film has all the bells and whistles we have come to expect from big-screen and big budget sci-fi fare, but it has much much more. It expertly captured that familial feel of “Firefly” and you left the theater feeling as one of Mal’s ship-board family, lamenting the loss of two of its beloved members and rejoicing with those that remained. That is not an easy task for a director to be able to translate that kind of spiraling emotional arc within the framework of a 2 hour flick, but Whedon does it in such a way that makes you realize that he is the real silent and invisible heart of Serenity and her crew.

I loved this film, will see it again and again, and the minute it becomes available on DVD, it will be part of my treasured sci-fi collection.

It has been reported that the entire cast and crew have signed on for a sequel. I am already looking forward to the genius that Whedon will weave onto the big screen. And who knows, this is sci-fi and perhaps, just perhaps, our two beloved characters that made the ultimate sacrifice in this movie may be able, through the magic of film, return for all of us to love and enjoy again. “There are always possiblities!”