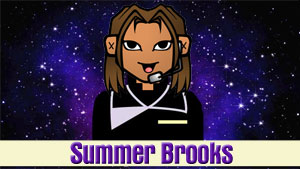 Summer Brooks: Host, Producer
Summer started out as a producer for Slice of SciFi from the beginning, starting with supporting the “Save Enterprise” campaigns that were promoted on KFYI 550 AM’s weekly live show, then she moved to being a regular Slice of SciFi co-host and news anchor just a few episodes after the “Save Enterprise” podcasts ended.

After stepping away as full-time co-host in 2009, Summer continued to produce the show and maintain the websites. Then in August 2014, Summer took up the challenge of solo full-time host; as the last of the original Slice of SciFi creators, she felt she needed to keep the torch burning at least a little while longer.

Summer Brooks: Executive Producer
Summer is a bit of a television addict, and enjoys putting her scifi media geek skills to good use in interviewing guests for Slice of SciFi as a co-host from 2005-2009. She was previously the co-host for The Babylon Podcast, The Charlie Jade Verse, and host of Kick-Ass Mystic Ninjas, before returning to Slice of SciFi as full-time host in August 2014.

She is an avid reader and writer of scifi, fantasy and thrillers, with a handful of publishing and voiceover credits to her name. Next on her agenda is writing an urban fantasy tale, and a B-movie monster extravaganza.

Currently, Summer designs and maintains the websites and the podcasts in the Slice of SciFi universe, plus records story narrations for StarShipSofa, Tales to Terrify, Far Fetched Fables, and Escape Pod, and a few others.