“M3gan” is a delightful trifle of a film that does not take itself too seriously. In the spirit of other Blumhouse productions like “Freaky” and “Happy Death Day,” it deftly mixes genuine scares with comedic touches. The movie examines human dependence on technology and the dangers of artificial intelligence (AI) gone awry.

The picture opens with an hilarious ad touting Purrpetual Petz, Furby-like creatures. Unlike real pets, the tagline notes that not only will they not die but they will outlive you. A macabre part of this campaign shows a young child burying a real pet and being sad. Glee follows when she gets a Purrpetual Petz. These Petz mimic animal bodily functions, including excretion.

In the next scene, we see a family traveling in a snowstorm to a ski resort. The young parents are annoyed by the antics of their daughter’s Purrpetual Petz. It jabbers away and makes farting noises. Their daughter Cady (Violet McGraw) cannot be bothered to distract herself from her iPad interaction with her Petz.

Soon the storm is so severe that driving becomes impossible. The car is stopped in the road. Oncoming headlights portend the disaster that is to follow.

In a toy laboratory, Gemma (Allison Williams) is working with two colleagues Tess (Jen Van Epps) and Cole (Brian Jordan Alvarez) on a prototype humanoid doll. The three work at Funki, the creator of Purrpetual Petz.

Funki has been undercut by lower-priced rip-offs of their designs. Their boss, David (Ronny Chieng), has tasked the trio with creating a low-priced toy to compete in the changing market. He is displeased at their work on their private project, which is Gemma’s brainchild.

Soon Gemma receives the call to the hospital. Both Cady’s parents, one of whom is Gemma’s sister, are dead. In a few days we see the two return to Gemma’s house.

Gemma has no clue how to be a parent. She is lacking in emotional intelligence and does not know how to deal with Cady’s trauma. When Cady wants to play with Gemma’s collectible toys, Cady is confusingly told that while they are toys, they are not meant to be played with. A tense household emerges as the two try to connect. Gemma is under work pressure and pays more attention to her phone or PC than she does to Cady.

Suddenly an idea occurs to Gemma. She pushes ahead the development of M3gan (Model 3 Generative Android) to be a companion for Cady. Possessed with superior AI that mimics human emotions perfectly (just accept it!), M3gan is designed to pair with Cady. As such, she begins to correct Cady’s bad behaviors with etiquette lessons while providing her with emotional and educational support. 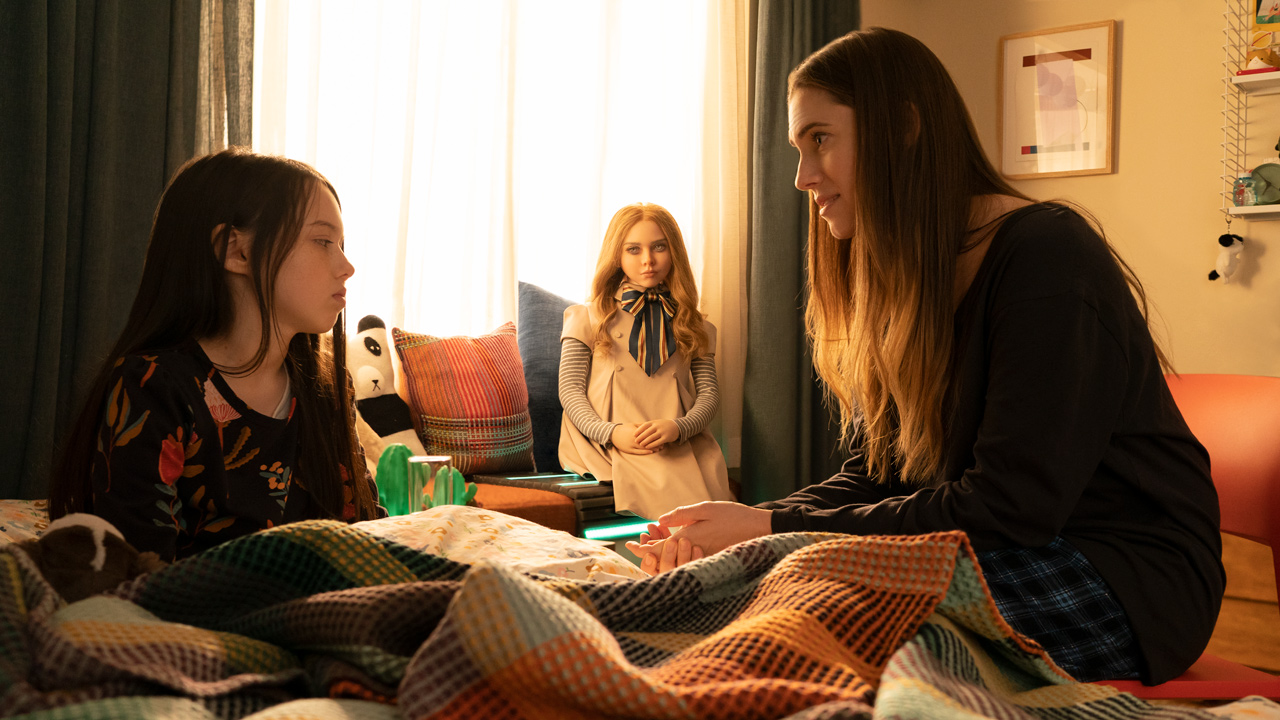 Cady and M3gan become best buddies and inseparable. Cady will not participate in activities that do not include M3gan. When Gemma resists, you can figuratively see the wheels turning in M3gan’s head as she calculates how to fulfill Cady’s desires at all costs and starts to recognize perceived threats to Cady.

Soon a neighbor’s dog that bites Cady disappears. A young boy who harms Cady at an outing rolls down a hill into the path of a car. Worse is to come!

M3gan herself is an astounding presence on screen. When new people meet her, they are clearly struck by the uncanny-valley effect. That a child-size doll can move with such precision and mimic humans so closely is truly creepy.

There is a wonderful scene where a group of executives are gathered in a viewing room to watch Cady and M3gan interact. Unrehearsed, Cady expresses grief over the loss of her parents. M3gan provides a pitch-perfect response that moves these hardened businesspeople to tears. What goes unanalyzed by these people is the influence this AI is having on them and their interactions with the world.

A child psychologist/therapist tries to warn Gemma about Cady’s attachment to M3gan. This falls on deaf ears of course. And why wouldn’t it? The earlier scenes of Gemma’s attachment to her phone and PC already have provided the social commentary needed to show how M3gan is just a step in the next iteration of technological dependence in the form of a glorified babysitter.

The issues of AI and its possible dangers go back a long way. As we come closer to self-actualized AI models, the anxiety ramps up. This film deals in a very cursory, and sometimes comedic, way with these potential problems. It is not meant to be a deep dive into the concepts but rather an amusing and scary way to deal with this angst.

Of course the AI inherent in M3gan is so over the top in its design that it is hard to believe that one person like Gemma could have created it. But this is not the kind of movie that deals in hard science or even pretends to do so. Everything is in the service of the ultimate goal: to show the results of an AI gone amok.

M3gan in violent action is a sight to behold. The most frightening effect is when she scampers on all four hands and feet. The deaths are creative. Like a true Batman villain, she often gives a soliloquy to go along with her victim’s demise. I liked that she could mimic other people’s or animal’s voices to lure others to their fate.

From the credits it appears that M3gan was played by a human child (Amie Donald) but voiced by an adult female (Jenna Davis). Both deserve kudos for creating such a believable character. The other acting is pro forma.

Other than the opening advertisement, the movie is basically slow-moving and somewhat tedious until M3gan appears. Then the pace increases exponentially and in very positive ways. This last half is where the script excels.

The production values are adequate. The M3gan effects and the details of destruction/death scenes are very well-done, however. There is a great ear-lobe removal but relatively little gore.

Small children should not see this picture. But it is OK for tweens and teens. It provides a good chance for parents to discuss with their children the limits, if any, of attachment to technology and its use as a substitute for real human interaction.

For adults, this is just a fun, scary time. Hang in there until M3gan appears and you are off and running.

She’s more than just a toy. She’s part of the family.

M3GAN is a marvel of artificial intelligence, a life-like doll programmed to be a child’s greatest companion and a parent’s greatest ally. Designed by brilliant toy-company roboticist Gemma (Get Out’s Allison Williams), M3GAN can listen and watch and learn as she becomes friend and teacher, playmate and protector, for the child she is bonded to.

When Gemma suddenly becomes the caretaker of her orphaned 8-year-old niece, Cady (Violet McGraw, The Haunting of Hill House), Gemma’s unsure and unprepared to be a parent. Under intense pressure at work, Gemma decides to pair her M3GAN prototype with Cady in an attempt to resolve both problems—a decision that will have unimaginable consequences.

“M3gan” is a delightful trifle of a film that does not take itself too seriously. In the spirit of other Blumhouse productions like “Freaky” and “Happy Death Day,” it deftly mixes genuine scares with comedic touches. The movie examines human dependence on technology and the dangers of artificial intelligence (AI) gone awry.

"Us": More abstract than narrative horror
Reviewing "June"
"Black Wake" misses out on invoking the awe of cosmic horror
"The Pale Door": A Weird Western Highlight