“Beast” has some wonderful scary moments with a rogue lion intent on getting its revenge against humans. But the film tries the audience’s patience with a substandard script and an unnecessary subplot about a family’s personal troubles.

The movie opens with poachers approaching a trap for lions in South Africa. Some of them gather the carcasses of the slain animals and leave. Those that are left find themselves pursued by something terrible in the darkness. It kills silently and suddenly. A jump-start, quick cut of a lion ends the scene.

Next the Samuels family arrives in South Africa. Father Nate (Idris Elba) is a doctor. He is accompanied by his two daughters Meredith (Iyana Halley) and the younger Norah (Leah Jeffries). There they meet “Uncle” Martin (Sharlto Copley), who is an “anti-poacher” protecting the game preserve. Martin and Nate’s wife grew up together.

Arriving at Martin’s house, we discover the tensions inherent in the Samuels family. After Martin admires Meredith’s photography, Nate expresses an interest in seeing her work. Meredith lashes out at him for only now wanting to see her work. She excoriates him for being absent when their mother, from whom he was separated, was dying of cancer. Nate also told Norah that their mother would not die of the cancer, which was a lie.

At various times throughout the picture, Nate has dreams of his deceased wife. She is in traditional African costume and winding her way among various other women. It is almost as if she is leading Nate on with no resolution.

When Martin takes them out in a Range-Rover-type vehicle into the savannah, this gives Meredith an opportunity to take photographs. They pass by an abandoned schoolhouse and come to a cliff where a pride of lions, protected by two males, are resting. Martin raised the 2 males and they come to greet him. Everyone is impressed.

Then they go to a local village. When they arrive, no one is around. Soon we find out why: they all have been slaughtered by what Martin thinks is a rogue lion.

They go to get help as in this remote region they only have a CB radio with limited range. Finding a man dying of lion wounds in the road, Martin decides it would be a good idea to take a rifle into the neighboring wilderness to look for the beast.

Soon we hear a shot. Martin communicates via walkie-talkie that he has suffered a major leg injury at the hands of the lion. He is beginning to lose consciousness. Nate tells him to hang on and instructs him on how to cauterize his wound to prevent more blood loss.

Martin says that the lion is using him as bait. It soon attacks the vehicle and its occupants. In an attempt to flee, Meredith wrecks the car on the edge of a cliff.

The family members find a tranquilizer gun and darts stored in a compartment. But Nate ends up under the vehicle while the lion charges him. Norah is able to hand-place a dart in the lion’s rear. It runs away, seemingly slowing due to the effect of the drug.

Martin reunites with them. Nate performs a kind of surgery on him to stabilize him. Will the family and Martin be able to survive the lion? What about the poachers? 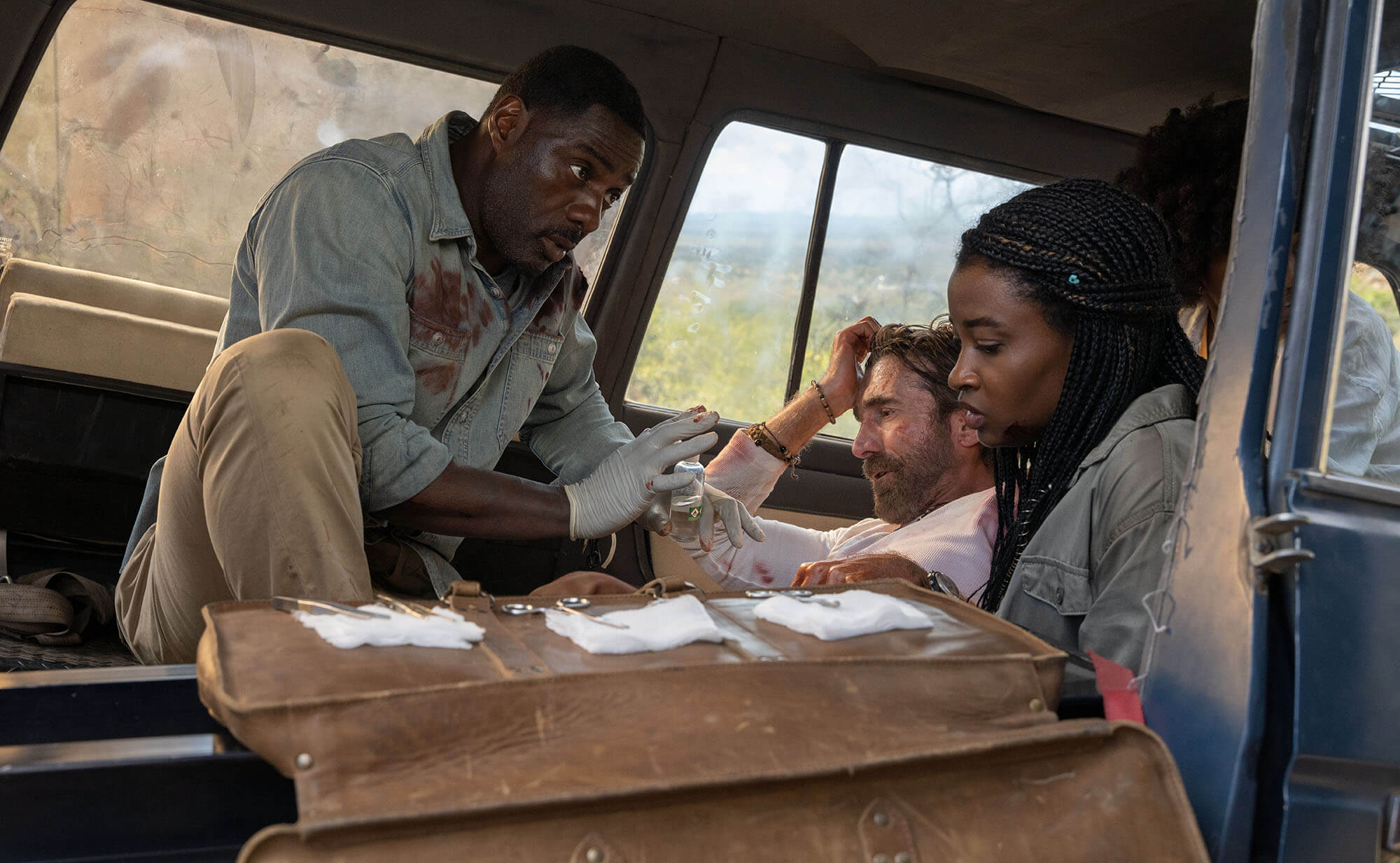 This movie seems very retro to me. In my youth I was accustomed to seeing man against nature films where animals were the “enemy” to be subdued. We now have moved to an era where we respect man’s place in and co-exist with nature, which is not to be “conquered.”

The situation also is complicated by the fact that the lion has a legitimate grudge against humans, who wiped out his pride. He cannot distinguish between which humans are responsible or not. Killing the evil poachers is quite different from attacking the innocent Martin and Samuels family. But can you blame the ignorant lion?

The screenplay does not make it easy to root for the Samuels. They commit egregious survival errors throughout the picture. They leave doors open in the abandoned schoolhouse so the lion can just wander in at will. Family members go solo away from the vehicle. Meredith wrecks the car in her haste to escape. Martin, supposedly knowledgeable about wildlife, goes solo to look for a rogue lion.

These are not the only problems with the screenplay. Why did they go to a remote region with very little water? Why did they not take a satellite phone with them? Why have none of the park staff ever checked out the abandoned schoolhouse, which is now Poacher HQ?

The family conflict that is supposed to exist is never truly developed beyond a few spoken words. No details of Nate’s alleged absence are revealed. Why did he not show up when their mother was dying of cancer? He never supplies an answer either, but just says that he loved their mother(?).
Not enough back story about the family is provided to make you care about the Samuels and their issues. Later in the film, when Nate asks his daughters to trust him, why should they? The lion seems to be a facile excuse to bond the family back together again.

The lion is inconsistently portrayed as well. In one sense, he is the Uber-lion, invincible, and then is portrayed as an ordinary lion. He has no difficulty easily killing poachers, who are much more savannah-savvy than the Samuels, but cannot easily kill the family. He is not very tranquilized by the dart and survives an explosion, but has trouble in a mano-a-mano encounter. When a member of the family is above him in a tree or below him in the water, he cannot scent them, as if his nose has ceased to function. He eviscerates the poachers but inflicts treatable wounds on the Samuels.

But then there are the visual effects. The lion is truly scary. You feel his threatening presence and he is well-rendered. For once, though, I wish that there had been more gore, as it seemed appropriate for a lion attacking humans, and more of the lion in general.

The cinematography is superb. Africa in all its glory is sublimely portrayed. I have to compliment the clear night lighting that was used throughout the picture.

Too scary for little children. Go for the lion but don’t expect much otherwise.

Two and a half out of 5 stars

Idris Elba stars in a pulse-pounding new thriller about a father and his two teenage daughters who find themselves hunted by a massive rogue lion intent on proving that the savannah has but one apex predator.

Elba plays Dr. Nate Daniels, a recently widowed husband who returns to South Africa, where he first met his wife, on a long-planned trip with their daughters to a game reserve managed by Martin Battles (Sharlto Copley), an old family friend and wildlife biologist. But what begins as a journey of healing jolts into a fearsome fight for survival when a lion, a survivor of blood-thirsty poachers who now sees all humans as the enemy, begins stalking them.