“Bullet Train” is a wild and blood-spattered ride. Its violence tempered by comedic moments, the plot gets more and more complex as revelation after revelation occurs. This is a film that will keep audiences intrigued and excited as the train speeds along to the finale.

The story begins in Japan with a man near a hospital bed on which lies a young boy. In the first of several name titles, he is characterized as “The Father” (Andrew Koji). His son has been pushed off the roof of a building. The Father is visited by an older man (Hiroyuki Sanada), later designated “The Elder,” who emphasizes that a father’s role is to protect his family.

A news clip on a TV in the room describes the theft or escape of a deadly venomous snake, a boomslang, from a local zoo. The keeper states that this reptile’s hemotoxic venom causes bleeding out of all the orifices on a human body if antivenom is not administered in time.

On a lighter note, an agent (Brad Pitt) is conversing via Bluetooth with his handler, Maria, who does not physically appear until the end of the picture. He has taken some time off and is easing back into his job. Maria gives him the codename “Ladybug,” which is a lucky symbol in Japan.

Ladybug is trying to be very Zen as he deals with his assignment, which is to retrieve a briefcase off a bullet train. He refuses to take a gun from a locker where he picks up other supplies.
The Father also is on the train. He intends to kill the person, the Prince (Joey King), who pushed his son off a building.

The Father unfortunately does not know that the Prince lured him onto the train to assassinate his employer, White Death (Michael Shannon). White Death came from Russia and joined a Japanese gang, whose leader he betrayed to seize control in one of many violent scenes in the film.

The Prince has posted an assassin outside the room of the Father’s son. If the Father does not obey her requests, she will have his son killed.

Lemon (Brian Tyree Henry) and Tangerine (Aaron Taylor-Johnson) are escorting White Fang’s loser offspring (Logan Lerman), identified as the Son, and the briefcase that Ladybug wants containing the $10 million ransom that White Fang would have paid for his release.

When the Son is murdered with boomslang venom and Ladybug gets the briefcase, things start to go sidewise. Not only are Lemon and Tangerine involved, but also other assassins who appear as the complex relationships between these agents of death unfolds. Backstories begin to explain why all of them are on the same train as if by coincidence. 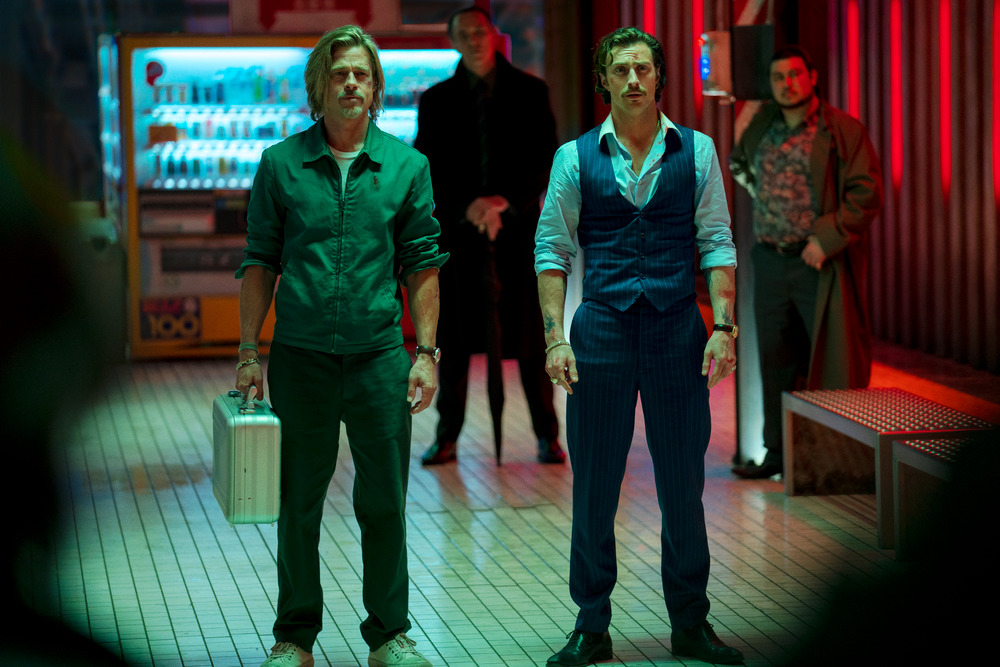 At first the picture was a little slow for my taste. The initial scenes with Ladybug seemed prolonged to me. But as plot points are revealed and the action picks up, it is easy to become invested in the story.

The fight scenes are well-staged, whether on the train or in flashbacks. There is a fluidity to the choreography. Often there are humorous elements, as different objects are used as weapons or the fighters stop mid-action to deal with a curious party.

A highlight of the movie is its wonderful visual effects toward the conclusion. It would be giving spoilers to talk more about the specifics, but suffice it to say that it takes the film to another dimension of intensity. The occasional use of bullet time adds to the impact.

Some of the best gore occurs during the conclusion. Swords add a nice touch in generating their own bloody scenes. One effect involving an exploding gun is the topper.

The inclusion of the snake, which I assume is computer-generated, on the train is a stroke of genius. Its venom in the hands of an assassin, both off and on the train, creates a fresh way to kill in a bloody manner.

The tone of the film does vary. The comedy, such as the banter between Lemon and Tangerine in general and about Thomas the Tank Engine in particular, adds a Marx-Brothers-like zaniness to the picture. Pitt in particular, with his philosophical comments seemingly at odds with his profession, gets some great lines.

But the shift between these lighter scenes and the more violent, action-packed sequences is organic. The movie is based on a novel of the same name by Kotaro Isaka, and I wonder if the written work has the same balance.

I did enjoy the film’s comments on fate made by the Elder. In a picture where life seems very cheap and quickly extinguished, the calm of the Elder as he recounts his beliefs at a pivotal point creates a bigger picture that ties the action together.

Kudos to the production and set designers for creating the intricate detail in the train cars. From a drink cart to a costumed anime character, these added so much for the viewer to take in and reify this world.

The screenplay is a work of art. This is a complicated story that takes a while to unfold. But it does so beautifully and at just the right pace. The editing of the film also is a crucial concomitant to the script as a misplaced scene could have confused the audience or interrupted the flow of the movie.

There is no getting around the fact that, as the title cards attest, each character is an archetype. As such, there is a certain freedom to go over-the-top when necessary. Lemon and Tangerine are the embodiment of this kind of performance and it is not a detriment at all to the picture.

The acting is well-cast. Sanada is particularly noteworthy as the Elder. There also are some cameos that are a wink-nod to the viewer.

The violence and gore preclude this film for younger viewers. But it is a enjoyable trip for adults.

Four and a half out of 5 stars

In Bullet Train, Brad Pitt stars as Ladybug, an unlucky assassin determined to do his job peacefully after one too many gigs gone off the rails. Fate, however, may have other plans, as Ladybug’s latest mission puts him on a collision course with lethal adversaries from around the globe—all with connected, yet conflicting, objectives—on the world’s fastest train. The end of the line is just the beginning in this non-stop thrill-ride through modern-day Japan from David Leitch, the director of Deadpool 2.

At first the picture was a little slow for my taste. The initial scenes with Ladybug seemed prolonged to me. But as plot points are revealed and the action picks up, it is easy to become invested in the story.

The fight scenes are well-staged, whether on the train or in flashbacks. There is a fluidity to the choreography. Often there are humorous elements, as different objects are used as weapons or the fighters stop mid-action to deal with a curious party.