Disney’s new animated film “Encanto” is sure to please families this holiday season. The magical elements combined with Lin-Manuel Miranda’s songs are winning attributes in this multi-ethnic offering. Its message of personal empowerment will resonate with children.

“Encanto” begins with Mirabel (Stephanie Beatriz) preparing for her coming-of-age ceremony with Abuela Alma (Maria Cecilia Botero). Alma reflects on the origins of this ceremony.

She and her husband Pedro lived in a village in Colombia that became marred by violence. They fled with their 3 infant children. As they were crossing a river, Pedro stayed behind to face evil men on horseback. Although his death is not seen on screen, it is assumed.

As Alma prayed for a miracle, a magical candle appeared. The candle led Alma and the children to a magical home and community, Encanto, in the mountains. Since that time, every descendant of the Madrigal family has had a coming-of-age ceremony in which each has a special gift bestowed upon them. 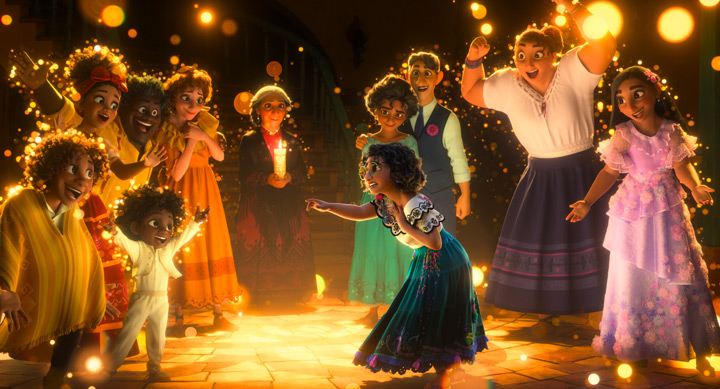 Unfortunately for Mirabel, nothing happens at her initiation. She is not given a power and so feels adrift in the family. Abuela Alma disregards the now-teenage Mirabel for the most part, even though Mirabel’s parents are supportive.

We see her trying to find a role for herself in Encanto. The community is multi-ethnic and is supported by the powers of the Madrigal family. These include strength, curing people with food, controlling the weather, and creating flowers.

As the family prepares for a wedding feast, trouble begins to emerge with the house. Flaws start to appear. Luisa (Jessica Darrow) begins to lose her strength.

Mirabel begins to investigate and decides to check out Uncle Bruno’s (John Leguizamo) room. Bruno left the family one day and no one has seen or heard from him since, not even Dolores (Adassa) who has enhanced hearing. In her search for Bruno, Mirabel discovers that she is part of a prophetic vision that will alter how the Madrigals see themselves.

The theme of the film is that you are more than what you can do. While this may be more obvious to adults, it may be a unique revelation to children. In modern psychology this is the idea of a “human doing” versus a “human being.”

It is intriguing that the screenwriters chose magical powers to be the idea of what each person “does.” Most of us would be thrilled to have a super or magical power of any kind. So to show that there are drawbacks when these powers begin to define our being or become a burden is noteworthy.

I thoroughly enjoyed the idea of magical realism that permeates this picture. The enchanted house is a pure joy to watch, and will thrill children. There are many comical scenes involving the magical powers of the Madrigal family that add to the buoyancy of the picture.

One particular aspect which I enjoyed was when Mirabel’s cousin Antonio goes through his initiation ceremony. His gift is being able to talk to animals. A multitude of South American animals suddenly appear. I never thought that I would see an animated capybara, but there it was. 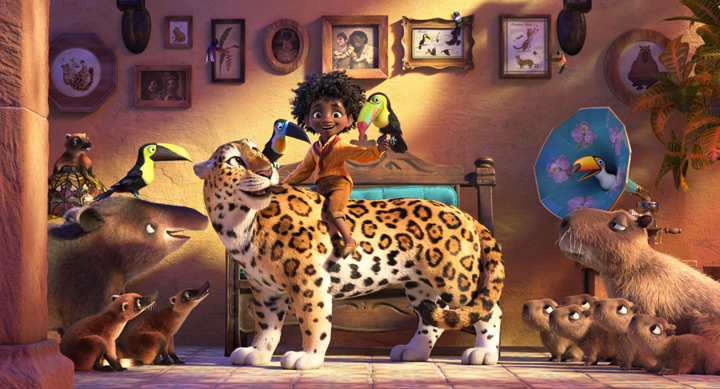 There is an allegory when Pedro and Alma flee their hometown and end up at a river. I immediately thought of real-life refugees fleeing the troubles in their own countries or regions. It obviously is not an easy decision to leave what one has known or to undertake a perhaps perilous and arduous journey. The magical candle is a stand-in for the hoped-for Promised Land that travelers seek to reach. A good discussion topic for children could be what would have happened to Alma and her children without a magical candle to help them?

Is Mirabel to be the next Disney princess? I found it notable that she wears glasses. I also appreciated that she doesn’t undergo a physical transformation to become herself.
Does it make sense though for every Disney female heroine to be labeled a “princess?” The term seems very outmoded now. Even “heroine” with its feminine suffix speaks to a bygone era. The fact that the “Princess” category is a huge marketing tool for Disney merchandise sales probably means that it will be slow to go away as a term or category.

A colorful palette is used throughout the movie. The screen literally pops when this is combined with the as-always excellent Disney animation.

The songs are composed by Lin-Manuel Miranda. None of them really stood out to me. But then I had a young niece who listened to every song on the “Moana” CD over and over to the point where she knew all the lyrics. So I am probably not the best judge of how well these songs will go over with a younger audience.

The family tree of the Madrigals and their spouses and children can be somewhat confusing. Each character can only have so much screen time.

There are some dark scenes in this film, such as Pedro and Alma at the river. None of them are so violent or frightening that they should unduly affect young children.

The harder scenes to deal with are the disrespect that Abuela Alma continually dishes out to Mirabel. Sometimes these are just snubs and other times they are active hostility. For an insecure child, these may hit home. However, the fact that, as in all Disney movies, Mirabel overcomes these put-downs and reconciles with a repentant Abuela Alma should compensate for this potential psychological pitfall for children.

While “Encanto” is not a film that will rank high in an all-time listing of Disney movies, it is thoroughly enjoyable and engaging.

Walt Disney Animation Studios’ “Encanto” tells the tale of an extraordinary family, the Madrigals, who live hidden in the mountains of Colombia, in a magical house, in a vibrant town, in a wondrous, charmed place called an Encanto. The magic of the Encanto has blessed every child in the family with a unique gift from super strength to the power to heal—every child except one, Mirabel (voice of Stephanie Beatriz). But when she discovers that the magic surrounding the Encanto is in danger, Mirabel decides that she, the only ordinary Madrigal, might just be her exceptional family’s last hope.

"Encanto": Gifts and Magic are only part of the whole

I thoroughly enjoyed the idea of magical realism that permeates this picture. The enchanted house is a pure joy to watch, and will thrill children. There are many comical scenes involving the magical powers of the Madrigal family that add to the buoyancy of the picture.