“Profile” is a compelling psychological thriller. A female journalist poses as a recent convert to Islam to track down the story of how ISIS recruited women who then became sex slaves. The film is told entirely through computer screens rather than filming actual people through a movie camera’s lens.

The movie is based on the true story contained in the book “In the Skin of a Jihadist,” which I have not read, by Anna Erelle. Set at a time in 2014 when ISIS was actively recruiting girls and women to Syria, the picture is directed by Timur Bekmambetov. He also helmed the superb 2008 action thriller “Wanted,” starring James McAvoy, Angelina Jolie and Morgan Freeman.

After the initial studio logos, a Facebook sign-up page takes up the whole screen. I initially thought that my PC, on which I was screening the film, had been hacked! But it is merely journalist Amy Whittaker (Valene Kane) setting up her new identity as “Melody,” a recent convert to Islam.

Amy is a stringer for an unnamed news service in the United Kingdom. She wants to be made full-time and this story is her chance to attain that goal. To this end, she researches how to look younger (although in her mid-20’s she wants to appear to be 19 or 20), how to wear a hijab, and about other women who have traveled to Syria have posted on social media.

After liking a few posts on Facebook, she is contacted by Bilel (Shazad Latif), an ISIS terrorist in Syria, who after messaging her wants to Skype with her. Amy’s editor, Vick (Christine Adams) sets her up with an IT person, Lou (Amir Rahimzadeh), who can record while she and Bilel Skype. Lou’s family is from Syria, so he is able to advise Amy on covering up her tattoo on her finger, how to wear her hijab, and not to make eye contact with Bilel.

Bilel and “Melody” begin to engage in a series of talks about her interest in coming to Syria. He entices her with images of him playing soccer, of him with a kitten, and of luxurious places where she will live.

At some point, Amy becomes anxious about being tracked down and killed by ISIS. She also is concerned about Lou, since he is of Syrian descent, and says very un-PC things about him. Vick offers to hand the story off to someone else, but Amy, desperate for cash and a full-time job, agrees to continue.

Soon Bilel is talking to “Melody” about getting married. She continues to put him off with various excuses. When he confronts her about her real age, she confesses that she has lied to him because she was embarrassed about being so “old” and still unmarried.

Amy’s relationship with her boyfriend Matt (Morgan Watkins) also begins to deteriorate as she spends more time on the story and in her new identity. She asks him to take her dog Sparky because dogs are haram (forbidden) in Islam. He starts to complain that she never goes out with him anymore. 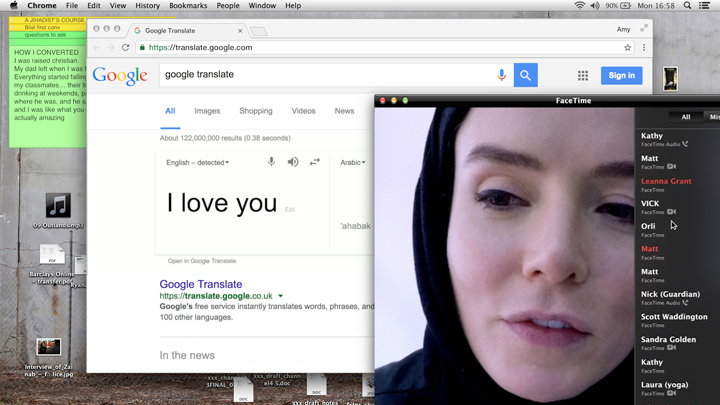 Is Amy/”Melody” falling in love with Bilel? Does she even know the difference between her identities? When the offer comes to go to Amsterdam as a way station to coming to Turkey and then Syria, will she take it?

The film parallels a spy thriller in the sense that, like a spy, Amy has disguised her true identity and would be executed if she were caught. In her case, the information she is seeking are the exact methods and routes used to get women to Syria, which ISIS clearly does not want Western authorities to know.

The psychological thriller plays out between Amy and Bilel as they each try to outgame the other. Amy has to be careful to play her part as a believer in Islam and not ask for too much information at one time or at the wrong time. You are never sure how much Bilel really loves “Melody,” as he claims that he does, or if he is just luring her so that she can become a nameless sex slave for ISIS fighters.

As the movie progresses, a true sense of dread starts to take hold. As it becomes clearer that either she will have to go to Syria or cut off the relationship to publish a story, you know that in either case she will be put in danger to the point of being killed by an angry ISIS.

The film also brings out the question of who we really are. Are we the information we post online in addition to being a living, breathing human being? When we create a fake identity, is there a chance that we will not be able to tell the difference between that identity and our so-called “real” one?

As an example, there is a point where she is Skyping with Bilel when he appears to be killed. Her editor Vick comments that this is one less terrorist to deal with, but Amy is seriously shaken up to the point where she holds herself accountable for his death. It seems that her Melody identity cares more about this terrorist than her Amy identity knows.

The film also contains commentary on how economic straits affect our decision-making process. Amy is short of money for her rent at the beginning of the story and already has taken an advance from her employer. Her boyfriend Matt and she are looking for places to rent together, and this puts additional economic pressure on her. So even as the risk of being killed by ISIS exists, it ends up being mitigated by her need for more income.

It is amazing to me how much I have become used to multi-tasking on a PC. As different pop-up windows appear on Amy’s screen while she talks to Bilel, my mind easily was able to process these instantaneously. It lends credibility to this filmic structure of using only computer screens for storytelling.

The interaction between Kane and Latif is top-notch. Even the side characters do excellent work with their small parts.

My one quibble is with the ending. I cannot reveal what that ending is, but I will say that I felt that one of Amy’s decision seemed to come from out of the clear blue sky. But it did not diminish my appreciation for the film in general.

There is remarkably little gore although lots of guns and explosives go off. This is a first-rate thriller that deals with an important topic that is still relevant after 2014.

Four and a half out of five stars

PROFILE follows an undercover British journalist in her quest to bait and expose a terrorist recruiter through social media, while trying not to be sucked in by her recruiter and lured into becoming a militant extremist herself.

The unconventional thriller plays out entirely on a computer screen in the Screenlife format, pioneered by Bekmambetov.