Jason Statham portraying angry guy with an axe to grind on a mission for justice, or vengeance, or some other form of medieval-inspired retribution will almost always ramp up the bullets and bloodshed. Wrath of Man is no exception, and Guy Ritchie’s stylish vision pushes this one to a different experience.

Patrick Hill joins the staff of Fortico, an armored car service that delivers cash to and from businesses, a company that had recently suffered the tragic loss of a team of drivers during a violent armed robbery. “H” is paired with “Bullet” as a training supervisor, and is approved for field status, but just barely passing the marksmanship qualifications.

In short order, “H”‘s skills and resolve are tested when the truck he’s riding in is targeted, and he dispatches the robbers with dispassionate precision, making himself a new hero in his coworkers’ eyes. Between this incident and flashbacks to the previous fatal robbery and the questions around what exactly happened there, we begin to see that “H” is on a quest for vengeance, and he pretty much doesn’t care how many bodies fall on his way to achieving that goal. The hunt for the team responsible for the death of “H”‘s son is on, and raising questions about everyone we come across.

There are a few holes in the story line, and while the hints are there in the film, there are some scenes included in the trailer but missing from this cut of the film that go farther towards explaining what’s going on around those holes. But honestly, those holes should not be there… and if the extra scenes show up in a director’s cut blu-ray, I will be both relieved and annoyed.

My questions are about who Patrick really is (something that is hinted at but never revealed), and what rackets his crew are actually into. Are they also just one more crew hitting armored cars, or is that just one of the many crimes they perpetrate around LA? How are they so well-organized and well-funded that they can kidnap the leaders of other gangs in town and proceed to interrogate and torture them? Then be able to afford to either execute them if they are irredeemable, or pay them off to keep quiet if they are released? 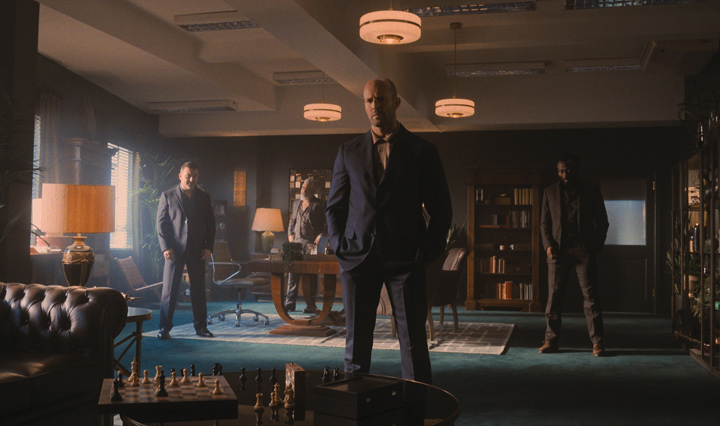 And if my other informed assumptions are correct, there seem to be enough different groups targeting armored truck deliveries every week in Los Angeles that every one of those deliveries and pick-ups should either be more heavily armed or have military contractor levels of security escorting every truck every day. There’s also the “look askance” involvement of a pair of FBI agents who seem to be under orders from their supervisor to keep hands off “H” (whose real identity is known to them), and let him clean up the streets until the heat gets a little to hot for comfort. From a plot perspective, it’s tiptoeing around “The Equalizer” territory, but from a story cohesion perspective for this film, there’s zero foundation for it or sense of it.

If a little bit of gratuitous violence in the name of retribution is up your alley, Wrath of Man will not disappoint, nor will the stylish cinematography and set pieces. Just gloss over those story holes when they wave flags in your face.

And honestly, now I also want to check out the original film this one is based on, “Le Convoyeur”, out of pure curiosity.

A mysterious and wild-eyed new cash truck security guard surprises his coworkers during a heist in which he unexpectedly unleashes precision skills. The crew is left wondering who he is and where he came from. Soon, the marksman’s ultimate motive becomes clear as he takes dramatic and irrevocable steps to settle a score.

Jason Statham portraying angry guy with an axe to grind on a mission for justice, or vengeance, or some other form of medieval-inspired retribution will almost always ramp up the bullets and bloodshed. Wrath of Man is no exception, and Guy Ritchie’s stylish vision pushes this one to a different experience.