I’m only a casual fan of the Tom Clancy universe, but I got a little excited to see this movie, mainly because of the cast, and the gorgeously intense trailer.

This movie tells the story about Navy SEAL Sr. Chief John Kelly and his search for justice after a rescue operation his team executed in Syria later results in fatal consequences for himself and several other members of that team. That initial operation was launched using misleading CIA intelligence and team members were instructed to conceal what they actually saw & heard during that mission.

As a result, retaliatory actions are taken against Kelly and several other members of that Syria team, killing everyone who was targeted except Kelly, but his pregnant wife dies during the attack on his home. After Kelly recovers from being shot, and is told that the investigation into the assassinations of his pregnant wife and the other members of his team will not move forward, courtesy of CIA director Clay, he does not react well.

Kelly takes matters into his own extrajudicial hands, finding a connection to the Russians in Syria they were told to overlook and the Russians who executed his wife while trying to kill him… using a creative way to threaten his first target in order to extract the information he wants (interrogation inside of a burning car). That information is enough proof to get the CIA to make a move, and allow Kelly to get his vengeance quest started. 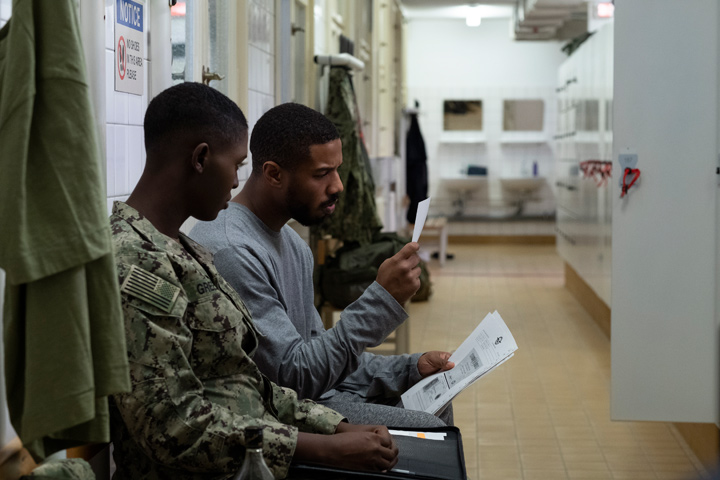 But while that information leads to another covert mission Kelly takes part in, that mission into Russia is sabotaged, but some underwater heroics from Kelly mean they can still carry out their extraction mission. But that goes sideways once Kelly hears from their target what the true stakes of all the operations are, which launches a race against time for the mission team to escape with their lives. Once both Kelly and CIA agent Robert Ritter overcome some initial mistrusts and start to work together, their primary goal becomes to head off any reason by the US and Russia to start a new World War.

The action sequences are well done. It’s not confusing to follow the action, and in some instances that could have been hard to do given how many of them were night scenes, and filmed with surrounding dark areas as well.

The story is another thing entirely. I understand the need to set up several pieces to be put together later to have a bigger puzzle, but when those pieces aren’t set up clearly, nor are the red herrings done well, it’s harder to figure out what the puzzle was supposed to be, which makes the movie less fun.

There is a mid-credits scene that die-hard fans of Clancy’s will not want to miss, because of what it suggests. I found it amusing because the pieces of this story did not click into place until the end, where Cmdr Karen Greer gives John his new identity before he gets on a train to disappear: John Clark, who is the leader of the Rainbow Six squads from the novel and subsequent video games.

If this movie was intended to be a springboard into a Rainbow Six show, I understand why they may have wanted to make this origin story as a way to lead people who are unfamiliar with the games into the series. Unfortunately, in trying to create a launchpad for Rainbow Six, this story creates massive confusion for anyone who may be fans of the Jack Ryan movies.

I know who Jim Greer is from Hunt for Red October, and I know who Ritter is from Clear and Present Danger. Having Kelly’s commander be Jim Greer’s niece is not a problem, but the problem is the timeline and character ages & positions. Jim Greer, by the timelines of the movies, has passed away; he died during Clear and Present Danger. Robert Ritter is acting director in Greer’s stead after his death, but Ritter in Without Remorse is still an active field agent, involved in thwarting Russians meddling in the war in Syria in current day.

While I’m not familiar with how Rainbow Six fits into the timelines of the original Jack Ryan novels, this take on the characters only serves to add more confusion to an already hard-to-follow storyline the movie already creates. It’s a nitpick on my part, but I think someone should have better addressed some of this beforehand.

I think Amazon might have been better served to have made a prequel miniseries instead, say a four-episode peek into the world of John Kelly and the circumstances that led him to becoming John Clark and creating the Rainbow teams (as he explains in that mid-credits scene). And a Rainbow Six series is something I would have wanted to see anyway, even without having this movie open that door.

There is too much disconnect between the SEALs and Kelly’s wife and what we are supposed to feel… we didn’t know them long enough to make any emotional evaluation of what they mean to each other, and Kelly’s quest to avenge his wife seems to be thrown aside so he can reframe the sabotaged mission to being one to protect his country from a war about to manufactured to “bring the country back together” (no, I didn’t get it either).

But if you enjoy a movie with lots of action and some hand-wavery at political intrigue, this will more than satisfy your action movie itch. And put me down for seeing more action with Jodie Turner-Smith leading the way, while you’re at it.

An elite Navy SEAL uncovers an international conspiracy while seeking justice for the murder of his pregnant wife in Tom Clancy’s Without Remorse, the explosive origin story of action hero John Clark – one of the most popular characters in author Tom Clancy’s Jack Ryan universe.

When a squad of Russian soldiers kills his family in retaliation for his role in a top-secret op, Sr. Chief John Kelly (Michael B. Jordan) pursues the assassins at all costs. Joining forces with a fellow SEAL (Jodie Turner-Smith) and a shadowy CIA agent (Jamie Bell), Kelly’s mission unwittingly exposes a covert plot that threatens to engulf the U.S. and Russia in an all-out war. Torn between personal honor and loyalty to his country, Kelly must fight his enemies without remorse if he hopes to avert disaster and reveal the powerful figures behind the conspiracy.

If this movie was intended to be a springboard into a Rainbow Six show, I understand why they may have wanted to make this origin story as a way to lead people who are unfamiliar with the games into the series. Unfortunately, in trying to create a launchpad for Rainbow Six, this story creates massive confusion for anyone who’re fans of the Jack Ryan movies.