Ostensibly and primarily a biopic of Marie Curie, director Marjane Satrapi (“Persepolis”) transforms “Radioactive” into something more. Through the inclusion of historical scenes that document the effects, both positive and negative, of the effect of the discovery of radioactivity, she provides the opportunity for reflection on the uses of scientific advancements to the betterment or to the detriment of humanity.

My personal knowledge of Marie Curie, or Madame Curie as she is often referred to, is limited. I recall reading the sanitized children’s biographies available in the 1960’s and seeing the 1943 film “Madame Curie” starring Greer Garson and Pierre Curie some time ago. But I have not read the book “Radioactive: Marie and Pierre Curie: a tale of love and fallout” by Lauren Redniss, on which the script for Satrapi’s movie is based.

As with all biographical films, the choice that every screenwriter or director must make is what to include and exclude. In this case, the picture starts with an older Marie Curie collapsing in her lab and being wheeled on a gurney into a hospital ward. From there, the story moves to her first meeting with Pierre, her being thrown out of her lab, and then her eventually grudging reluctance, for fear that he will take credit for or interfere with her work, to share lab space with Pierre. 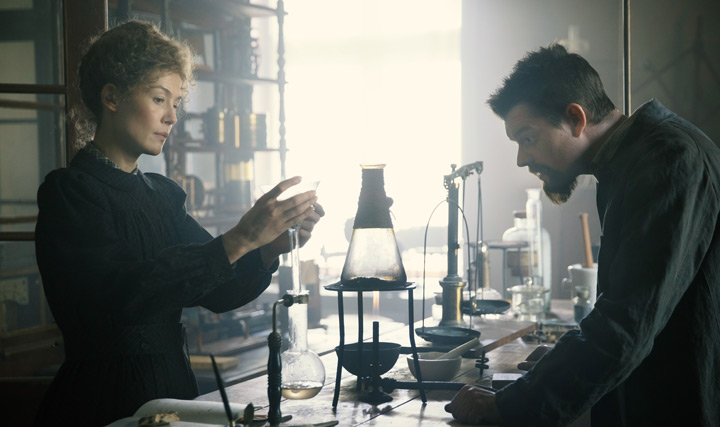 Eventually they develop a working relationship where they can indeed collaborate. Romance ensues and the two are married. There are several excellent scenes set in the lab as they progress to the discovery of radium & its atomic structure. This period culminates with their receipt of the 1903 Nobel Prize for Physics, along with Henri Becquerel.

Tragically, for those who know this much of the story, Pierre is killed by a horse cart while crossing a road on a rainy night. While Marie is given his professorship and eventually a better lab, she is heartbroken at his loss.

She begins an affair with the married physicist Paul Langevin, which leads to her vilification as a home-wrecker. Despite not being Jewish, she is reviled as such by anti-Semites and xenophobes who tell her to go back to Poland. This criticism is assuaged by her winning another Nobel Prize, this time in chemistry, in 1911. The film’s choice is to conclude with her work with her daughter Irene in providing mobile X-ray units in World War I.

Throughout the film, different historical vignettes are presented. These are set in 1945, 1957, 1961, and 1986. The first and last of these deal with Hiroshima and Chernobyl, respectively. The scene from 1957 in Cleveland deals with the use of radiation therapy on a child to cure his cancer. Most macabre is the clip from 1961, where people pay money to sit on benches to watch an open-air atomic bomb test in Nevada and an entire town of mock figures has been set up to document the destruction.

There is no doubt that this film is carried by the strong performance of Rosamund Pike as Marie. Pike is so good in the underrated and underseen “Hostiles” and “A Private War” and this continues in this picture. Marie Curie was a complex person, and Pike is able to portray her ambiguities, fears, doubts, and happiness with aplomb. There is no doubt from Pike’s acting that this was a smart woman who knew it in a world dominated by men.

She and Sam Riley, who portrays Pierre, have perfect chemistry as a romantic couple. This includes not only their idyllic periods but also their conflicts. I just wish that more time had been spent on this aspect of their relationship. Their performances make it crystal clear that they could indeed be equals in a scientific collaboration.

I found it intriguing that one of the choices made in producing this biography was to eliminate most of Marie’s life in Poland. She was in her twenties when she moved to France, and she took her children there throughout their life. We do get one scene where Marie and her sister deal with their dying mother, but other than that Poland is rarely mentioned.

But, if the absence of Poland is noteworthy, the substitution of the historical vignettes is brilliant. They add an element that would have not been possible in 1943 when the original “Madame Curie” was filmed, as the Manhattan Project was still working on creating the atomic bomb. At first I was startled, but then as each one was shown, they added such depth to what could have been just an ordinary biopic.

The film allows the audience to judge for themselves whether or not the discovery of radioactivity has been worthwhile. There is an end scene where Marie is somewhat involved with the various scenarios presented which provides another point of discussion. In the inevitable written text that concludes historical films, a mention is made of the benefits of nuclear medicine that seemed to me to undercut the power of the film’s presentation of all sides of the discussion. But that is a minor quibble.

One aspect that could have been included as an historical vignette but was not is the impact that radioactivity has had on popular culture, in particular movies. Who can forget the many 1950’s and 1960’s films that had creatures grown large or mutant because of radioactivity? Or the post-apocalyptic films from that time after a nuclear holocaust?

From the first frame the absolutely superb cinematography is striking. The uses of lighting in both outdoor and indoor settings are masterful. In darker sequences, light and shadow are subtly rendered. The scene at a séance when radium with its eerie green glow is present is stunning. A modern dance with colorful clothing pops out to the viewer.

As to other production values, I particularly liked the set design for the Hiroshima and Nevada sets. The visual effects at Hiroshima, Nevada, and Chernobyl are well-done. Yet I found nothing compelling about the costumes or set design in Paris, which seem a little washed-out to me.

The movie also is to be commended for its presentation of scientific jargon in understandable terms. This is the sort of film that will make you want to do more research on the Curies, the science involved, and the historical events mentioned.

Certainly it compels me to want to read the book it is based on to see if it is as nuanced as this picture.

Four out of 5 stars

From the 1870s through our 21st century, RADIOACTIVE tells the story of pioneering scientist Marie Curie (Rosamund Pike) through her extraordinary life and her enduring legacies – the passionate partnerships, her shining scientific breakthroughs, and the darker consequences that followed.

Starring Rosamund Pike, Sam Riley and Anya Taylor-Joy
Directed by Marjane Satrapi
Written by Jack Thorne
Based on the book by Lauren Redniss

"Radioactive": A compelling and thought-provoking biopic

From the first frame the absolutely superb cinematography is striking. The uses of lighting in both outdoor and indoor settings are masterful. In darker sequences, light and shadow are subtly rendered. The scene at a séance when radium with its eerie green glow is present is stunning. A modern dance with colorful clothing pops out to the viewer.

The movie also is to be commended for its presentation of scientific jargon in understandable terms. This is the sort of film that will make you want to do more research on the Curies, the science involved, and the historical events mentioned.