It’s been more than three quarters of a century since Universal studios released the classic film The Invisible Man. Whereas much of their other monster properties from the early 1930s (properties like Dracula, Frankenstein, and the Wolf Man) have been rebooted numerous times, The Invisible Man has largely stood on its own in terms of being a serious genre work. Subsequent productions featuring the Invisible Man character have largely been comedies played for laughs and we have been long overdue for a genuine reboot of the classic story.

In this regard, director Leigh Whannell’s Invisible Man film delivers the goods. Unlike Universal’s big budget attempt at rebooting The Mummy and setting up an interconnected Dark Universe, Whannell’s movie goes back to basics giving us a lean, stripped down suspense movie in the vein of Alfred Hitchcock or classic film noir. This movie benefits from its lower budget, relying on old fashioned acting and camera angles to create an atmosphere of tension that puts the audience on edge and ready to jump in their seats. The Invisible Man story is cleverly updated to become a cat and mouse tale of an invisible stalker that won’t allow a woman to get free from her abusive relationship. Lead actress Elisabeth Moss seems genuinely haunted, to the point that one has to wonder how taking on this role might have affected her in real life. 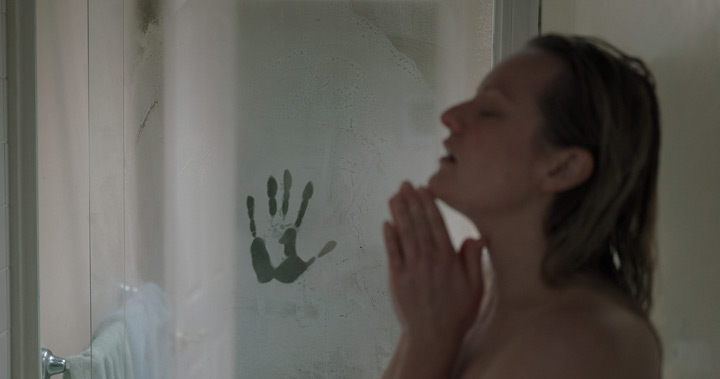 This is definitely the direction that has been needed for rebooting the Universal monster franchise, one to be applauded and encouraged. The first half or so of this movie is a near perfect example of what these films should be. Unfortunately as it goes along the movie develops something of an identity crisis. Unlike the traditional Invisible Man, going back to HG Wells’ story of a mad scientist that develops an invisibility serum, this modern Invisible Man relies on technology, wearing a multi-camera tech suit that creates his invisibility. When the Invisible Man’s suit becomes damaged the film veers into action territory as he begins to phase in and out of view and the movie switches gears from being a creepy suspense story to being an all out brawl with I Spit on Your Grave-style revenge fantasy overtones. Yet, as the movie itself shifts away from suspense/horror to more of an action/revenge focus the soundtrack is still one of tension and fear, leaving the impression that the filmmakers themselves aren’t quite sure where they’re trying to go with it. It feels like they want to make a scary movie but want to tell a story of female empowerment at the same time and what they end up with feels like two separate stories smashed together instead of one cohesive story that flows well from beginning to end.

It’s really a shame and makes this a difficult film to rate. What’s it tries to do is so exactly what the franchise needs but it’s inconsistent, winds up working against itself, and despite a strong start doesn’t sustain its atmosphere all the way through to the end. I find myself wavering between giving it 2.5 and 3 stars, but in the spirit of wanting more moderately budgeted suspense-focused movies starring the classic Universal monsters I’ll give it a 3.

What you can’t see can hurt you. Emmy winner Elisabeth Moss (Us, Hulu’s The Handmaid’s Tale) stars in a terrifying modern tale of obsession inspired by Universal’s classic monster character.

Trapped in a violent, controlling relationship with a wealthy and brilliant scientist, Cecilia Kass (Moss) escapes in the dead of night and disappears into hiding, aided by her sister (Harriet Dyer, NBC’s The InBetween), their childhood friend (Aldis Hodge, Straight Outta Compton) and his teenage daughter (Storm Reid, HBO’s Euphoria).

But when Cecilia’s abusive ex (Oliver Jackson-Cohen, Netflix’s The Haunting of Hill House) commits suicide and leaves her a generous portion of his vast fortune, Cecilia suspects his death was a hoax. As a series of eerie coincidences turns lethal, threatening the lives of those she loves, Cecilia’s sanity begins to unravel as she desperately tries to prove that she is being hunted by someone nobody can see.

This is definitely the direction that has been needed for rebooting the Universal monster franchise, one to be applauded and encouraged. The first half or so of this movie is a near perfect example of what these films should be. Unfortunately as it goes along the movie develops something of an identity crisis.