This movie has an unusual narrative structure. For one thing, there is quite a bit of voice-over narration by Harley Quinn (Margot Robbie), along with the occasional breaking of the fourth wall. The picture will be in the middle of a story and you are suddenly hurled back in time to a previous occurrence to bring you up to speed. So while my summary is chronological, the film is not.

Since this film is a continuation of sorts from 2016’s “Suicide Squad,” we see a recap of events in Harley’s life from that movie’s perspective. Finding ourselves in current times, Harley has not told anyone that she and the Joker have broken up. So she can engage in outrageous, harmful behavior with everyone too scared of the Joker to retaliate against her.

We initially see her in a bar owned by Roman Sionis (Ewan McGregor), aka Black Mask, a notorious gangster. Harley finally decides to admit to herself that she and the Joker are done. She discards her necklace and drives a gasoline truck into Ace Chemicals plant. She creates havoc and beautiful explosions reminiscent of fireworks. (Did she kill anyone inside? This is not that kind of movie where anyone cares.)

Now that people know that she is not the Joker’s paramour, they come after her with a vengeance. Each assailant gets a freeze-frame with graphic text explaining who they are and what their grievance is. Since the police know that she blew up the chemical factory, Renee Montoya (Rosie Perez) of the Gotham City Police Department (GCPD) is after her as well.

In a sub-plot, we meet Cassandra Cain (Ella Jay Basco), a foster child in a violent family who is an excellent pickpocket and thief. She is sitting on the staircase when Dinah Lance (Justine Smollett-Bell), aka Black Canary, who sings at Scionis’ nightclub comes by to give her a “hang in there” pep talk and gives her cash to go get some food.

On another thread, Sionis dispatches Dinah, now his driver after he saw her take down thugs attempting to abduct Harley, and his evil sidekick Victor Zsasz (Chris Messina), who likes to peel the skin off of people’s faces, to retrieve a diamond. This diamond was once owned by the Bertinelli crime family, who were all assassinated. It is encoded with the account numbers of the Bertinelli fortune.

Cassandra ends up pickpocketing the diamond from Victor. Arrested for some other theft, she is taken to GCPD HQ. Sionis eventually figures out that she has it and puts a large bounty on her head to get the diamond, which she swallowed (a running gag in the film is her trying to discharge the diamond from her body).

When Sionis is about to have Harley’s face peeled off, she convinces him to let her go after Cassandra. Of course Sionis has broadcast his bounty so when Harley gets to the jail, she rescues Cassandra only after a long martial-arts sequence with the other bounty hunters.

Eventually all of these paths converge as the various female characters try to protect Cassandra, still with diamond implanted, from Black Mask and his evil associates. 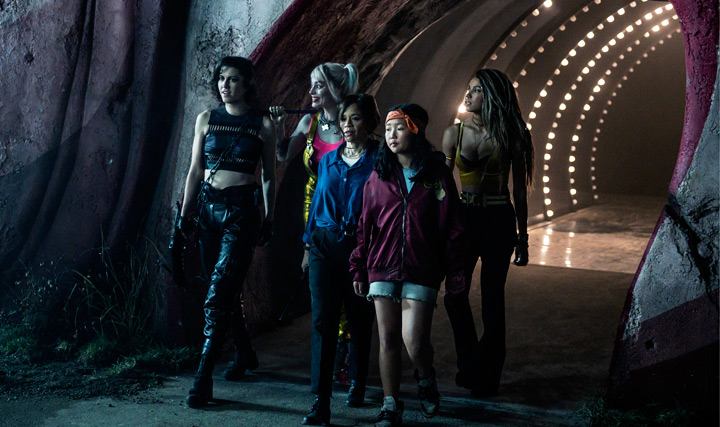 The film is rated R, so automatically it eliminates the teen audience from attending its showings. “Suicide Squad” did well financially, but it was rated PG-13. So one has to wonder what the producers were thinking when they decided to make an R-rated film and cut the audience market share.

It deserves its R rating as it is quite violent but in an almost abstract way. People die but there is usually not too much gore. Even when we see the skin of a face peeled off, it is discarded like an old steak.

When there is armed combat, the victims are mostly flunkies who we know nothing about. Their demises come off as video-game deaths of nameless opponents. The movie desensitizes the effects of violence, disguising it as the result of cool martial-arts sequences.

The choreography in the battles is superb. There are some weapons used, but the predominant method of subduing thugs is via martial arts. One sequence in an amusement park is beautifully staged, although improbable.

The loud music, quick-cut editing, use of graphics on the screen, and brilliant costuming and make-up all gives this picture its panache and style. These production values enhance the take-no-prisoners vibe. The director, Cathy Yan, knows what she wants and admirably carries it off.

Margot Robbie continues to show what a great actress she is. She was even superb in her small scene in “The Big Short.” She fully inhabits the crazy mind of Harley Quinn. The problem is that she is an unlikeable protagonist. Yes, she can be funny and quirky, but ultimately she also is mean and cruel. One could argue that everyone she targets deserves their fate, but this disguises the fact that she is mentally ill. Of course so are many other supervillains, so this is not unique. But it created a distance for me from relating to the character sympathetically.

I will say that it is about time that we are seeing movies with female superheroes and supervillains, for that matter. There are too few female directors in Hollywood, and Yan does a good job with the material at hand.

There is nothing wrong with an action movie being an action movie. This picture succeeds in that regard. Where it fails is in being different from the pack other than its production values and action.

Since it is an R-rated film, you need not worry about bringing children to a showing. It is entirely inappropriate for young children. It is not much better for teens with its desensitization of violence. But if you are an adult, you can go and spend a good afternoon watching an often clever piece of cinema.

You ever hear the one about the cop, the songbird, the psycho and the mafia princess? “Birds of Prey (And the Fantabulous Emancipation of One Harley Quinn)” is a twisted tale told by Harley herself, as only Harley can tell it. When Gotham’s most nefariously narcissistic villain, Roman Sionis, and his zealous right-hand, Zsasz, put a target on a young girl named Cass, the city is turned upside down looking for her. Harley, Huntress, Black Canary and Renee Montoya’s paths collide, and the unlikely foursome have no choice but to team up to take Roman down.

Birds of Prey (And the Fantabulous Emancipation of One Harley Quinn)