Sometimes dark comedy and horror blur the lines and blend into a brutal and messy exploration of fallen characters, and in the 2017 Hong Kong creature feature Mon Mon Mon Monsters, director Giddens Ko pushes the viewer to go just a little farther.

The movie opens with a classroom examination of the futility of adults trying to force bullies and their targets to “just get along”, or have those victims explain what they did to make themselves targets in the hopes of “correcting” the conflict and helping everyone be civil to one another again.

Most people who lived through high school know this never works or helps, and most often times it makes situations worse and things end badly.

Eventually, their teacher assigns all the boys involved, including the harrassed Lin Shu-wei, to complete a tour of community service together, believing that bonding through menial community tasks helping the elderly will encourage empathy, teamwork and will help end the abuse aimed at Shu-wei.

The leader of the group of bullies, Tuan Ren-Hao, isn’t about to let something like community service, or being told to make nice get in the way of what he sees as the only bit of fun he has: beating up, abusing and humiliating other students, and his current favorite target is Shu-wei. Ren-Hao uses their unsupervised community service time to expand his circle of victims to include the elderly tenants they are supposed to be helping, and it’s during one of their visits to an elderly man that they encounter a pair of ghoulish gruesome creatures. 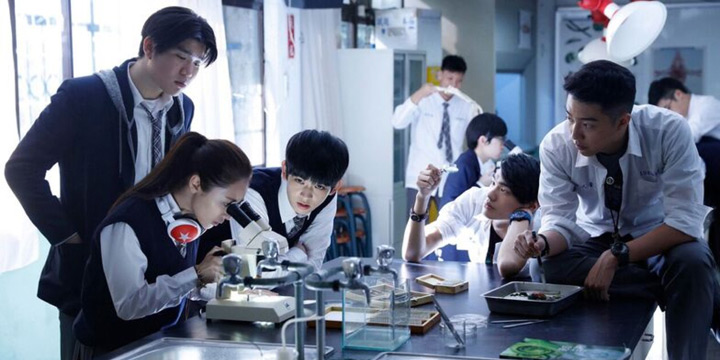 By dumb luck they manage to escape the pair, with one of them being incapacitated after being hit by a car, leaving her at the mercy of their curiosity and eventually, their sadistic natures. As they torture and run experiments on her, Ren-Hao’s abuse shifts from Shu-wei to their captive, and seeing the emotional conflict in Shu-wei is palpable… he is glad that he’s not on the receiving end but he’s wary of fully joining in, not wanting to become just like the guys who’ve been abusing him for a long time.

The push-pull of Shu-wei’s struggle against the “go along to get along” mentality, and fully embrace being a bully himself lead him to stand up and insist they treat their captive more humanely, especially after his research on the internet leads him to discover the original identities of the sisters, and how they came to be the monsters they are now.

This doesn’t help his case, nor his tenuous standing with the group of bullies, and as their tortures grow more gruesome, the other monster looks for her missing sister, hunting down students in the same school uniforms. The body count rises in numbers as much as in extent of evisceration.

Watching Shu-wei struggle with the acts he’s participating in to avoid becoming the target of abuse himself and the highlights the nearly impossible position he’s in, and you almost feel sorry for him as he ventures into the zone of abused becoming abuser — for a short while.

Once the captive creature’s sister tracks down the bullies, the destruction is creative, over the top, and darkly funny. The callous treatment of almost everyone around them pretty much makes you root for the creatures to take out the monsters. Call it karma working overtime in its immediacy.

The ultimate resolution is sadder and thought-provoking; after Shu-wei’s tormentors have met their fate, and the monsters themselves are no longer terrorizing the housing block, his being the target of bullying doesn’t cease. More of his classmates have taken up where the original crew of bullies had left off, and feeling that there’s no way out, and no coming back from the abuse he himself dealt out, Shu-wei takes what he’s learned from their experiments about the properties of the monster’s blood and expands that retribution to the rest of his abusing classmates. It’s the ultimate end game for breaking the cycle of bullying and victimization he’s caught in.

There are many scenes in the movie that are intended to be comedic, but when viewed through the lens of those who are bullied, they don’t come off as funny as they were intended to be. The reactions of the bullies when the tables are turned on them are amusing, but don’t last as long as they could be, to savor the just desserts they’re receiving.

The special effects throughout the film are intense and well crafted. The extensive use of practical effects, both in makeup and in gore, is delightfully done, and cleverly placed and shot. The effects and the character dynamics are worth watching this one for.

Mon Mon Mon Monsters is available on Blu-ray and DVD on February 4, 2020.

A group of classmates — a bullied boy and his tormentors — discover two flesh-eating creatures hiding in an old building while doing school-mandated community service. One escapes but they capture the other one for themselves, torturing her while trying to learn what she really is. As the monsters within reveal themselves, their captive’s ferocious sister scours the city in search of her missing sibling, as she hunts them down and stops at nothing to free her sister.

Sometimes dark comedy and horror blur the lines and blend into a brutal and messy exploration of fallen characters, and in the 2017 Hong Kong creature feature Mon Mon Mon Monsters, director Giddens Ko pushes the viewer to go just a little farther.