While there are some spots that strain credulity, “21 Bridges” is a taut, fast-paced police pursuit movie. The picture has excellent action sequences, impeccable cinematography and sharp editing that make it a cut above most such films.

Two establishing scenes prepare us for what is to come. The first centers around a funeral for the policeman father of 13-year-old Andre Davis. The sermon actually is quite moving.

The second one shows an adult Andre (Chadwick Boseman), now a police detective himself, facing a board of inquiry. Later we find out from another character that this is IA (presumably Internal Affairs). Andre is on the hot seat for shooting too many perpetrators, a timely topic. He does not back down from his actions.

After a brief scene of Andre at home with his mother, who clearly is in a state of dementia, the action shifts to two men preparing to rob a restaurant. Ray (Taylor Kitsch) and Michael (Stephan James) are working a low-level heist of 30 kilos of uncut cocaine for a local drug lord. Ray served in the military with his best friend, Michael’s older brother, who was killed in Afghanistan. Michael also served in the military, but was dishonorably discharged. 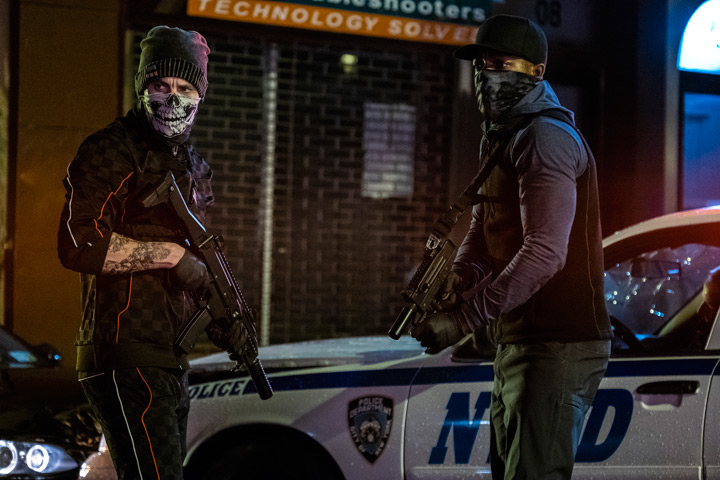 When they enter the establishment, they have the sole occupant lead them to the stash. It turns out to be 300 kilos, not 30 kilos. Michael knows that something is up. Suddenly four police officers show up. When their knock produces no result, they break in. Ray and Michael kill them all.

They take what cocaine they could carry and leave. In their escape attempt in the car, they encounter more patrolmen and kill 3 more while mortally wounding another.
Andre is among those summoned to the crime scene. He meets Captain McKenna (J.K. Simmons), the head of the 85th Precinct in Brooklyn. His men were those who were murdered. He pairs a reluctant Andre up with Frankie Burns (Sienna Miller), a narcotics expert.

After a short token exchange over jurisdiction with the FBI, they deduce from what is a very cool-looking command data center who the perps are and that they have fled into Manhattan. Incredibly, on a moment’s notice, the entire island of Manhattan is sealed off, allowing no one to enter or leave. This includes the titular 21 bridges that connect Manhattan to the rest of the world.

Michael and Ray know that they cannot stay in New York after killing 7 policemen. So they force their job handler to take them to the drug lord himself. Here they accept cash for their wares, but they cannot escape with the money because cocaine-sniffing dogs will detect it.

They are referred to a Sudanese money launderer, Adi (Alexander Siddig). At this place, they suddenly are confronted by New York’s finest and a gun battle ensues. As Ray and Michael flee, Adi tells Michael to take 2 flash drives connected to his computer.
At a local restaurant, the job handler is killed by some of McKenna’s men before Andre can question him. Andre is beginning to suspect that something is being covered up and that this is more than a routine police operation.

The film just races along at a rat-a-tat pace, both from the perspective of the police and the criminals. The movie is very lean in not having unnecessary scenes that slow the action. In particular, there are no tedious scenes of excessive exposition, yet it is not hard to follow the thread of the plot. The only exception where more exposition might have been needed was with the examination of what is on the flash drives.

The action mostly takes place in one night and the following morning. The night-time cinematography is superb. So many films are so dark that it makes them difficult to watch on DVD, but this one is not in that category. The framing and angles are deftly handled to maximize the action.

The action sequences, especially the gun battles, are realistic and well-staged. You can feel the danger and tension. The chases, especially in the subway, capture the franticness of the pursuit. 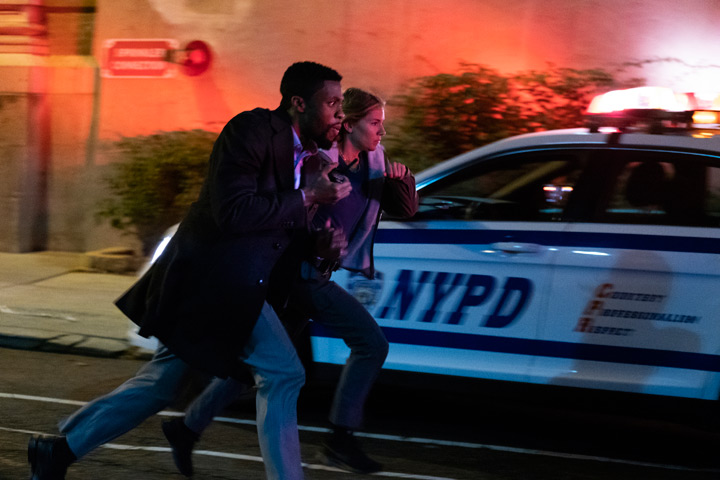 There is not much character development. But this almost seems irrelevant to the arc of the story. Each person seems accurately portrayed with a minimum of dialogue and exposition.

Boseman continues his outstanding body of work with the role of Andre Davis. He embodies the committed, driven servant of justice who operates within, but perhaps on the fringes of, the system. He is utterly convincing and his character’s actions are consistent with his philosophy.

Stephan James is another standout as Michael. He knows that he is in serious trouble. All he wants to do is get away. He, like Andre, knows that something is on those flash drives that is worth killing for, and fears turning himself in. His exchanges with Boseman are a highlight.

Of course there is the preposterousness of closing off Manhattan. It is a great premise, but this is not “Escape from New York” after all. I will give the film credit for making this seem plausible, even if the likelihood of this occurring, even to catch the killers of 7 policemen, seems low.

One of the themes that I enjoyed was the just man against a corrupt system. This can be handled in several ways. Sometimes it is not credible if the hero succeeds against impossible odds via a deus ex machina. But the key in this movie is that it is a corrupt sub-system of a larger system, which makes its demise easier to achieve in a believable way.

The film is a modern-day film noir that succeeds in portraying the grittiness of police work and the underworld. It doesn’t strive to be more than it is, but is an excellent example of the genre.

After uncovering a massive conspiracy, an embattled NYPD detective joins a citywide manhunt for two young cop killers. As the night unfolds, he soon becomes unsure of who to pursue — and who’s in pursuit of him. When the search intensifies, authorities decide to take extreme measures by closing all of Manhattan’s 21 bridges to prevent the suspects from escaping.

While there are some spots that strain credulity, “21 Bridges” is a taut, fast-paced police pursuit movie. The picture has excellent action sequences, impeccable cinematography and sharp editing that make it a cut above most such films.

The film is a modern-day film noir that succeeds in portraying the grittiness of police work and the underworld. It doesn’t strive to be more than it is, but is an excellent example of the genre.