The new animated film “Klaus,” produced by Netflix, starts out bleak but comes around to provide a new origin story of the beginnings of Christmas. The film cleverly introduces characters and concepts related to the tradition of Santa bringing presents to children.

The story begins at the Royal Postal Academy. Jesper (Jason Schwartzman) is living in a tent which is the lap of luxury as he “pursues” his training as a postal cadet. He is summoned by his father, the head of the Academy, who is furious at the cavalier way Jesper is taking his training.

His father has decided to send Jesper to Smeerensburg, a frozen island in the north. Jesper must revitalize the post office there and have 6000 letters sent in a year’s time. If he refuses to go or does not succeed in his mission, he will be cut off from his wealth.

Jesper treks along until he reaches the ferry which crosses to the island. He is not pleased to see the ramshackle village.

In the middle of town, he is tricked into ringing a large bell. This turns out to be the Battle Bell, which summons the two feuding families to come out and begin fighting. The Ellingboes and Krums have been waging war for years. The place is in such a sad state because the families are constantly destroying each other’s dwellings.

Jesper seeks refuge in what appears to be a school converted into a fish shop. The proprietor, Alva (Rashida Jones), used to be the schoolteacher but gave up. She now peddles seafood to raise money to escape from Smeerensburg.

The post office a decrepit old building and Jesper spends a very cold first night. The next day he begins to check the mailboxes. But there is no correspondence at all.

One day a young boy loses a drawing he has made of himself looking lonely at the window. When it floats down to Jesper, the boy asks him to return it. Jesper suggests that the boy give him money for postage so that he can mail the drawing back to the boy. Jesper has to flee, though, when the boy’s father appears with two mean dogs.

Jesper finally goes out to see if the solitary woodsman, Klaus (J.K. Simmons), wants to send a letter. But he is frightened by Klaus’ imposing figure and runs away. In the process he drops the drawing which the little boy made. Klaus enters his house where many toys sit on the shelves within.

Soon Klaus appears with his carriage asking Jesper to deliver a wrapped toy to the boy in the drawing. Jesper does this at night at some peril since the dogs chase him. The little boy loves his wind-up frog.

When other children see that the boy got a toy, they want to write letters for toys as well and show up at the Post Office. Jesper knows a good thing when he sees it and encourages them. 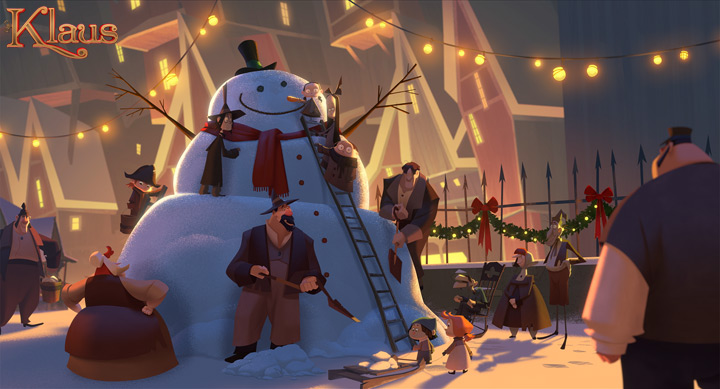 Not all is going well, however. When the boy, who is a Krum, is caught playing with an Ellingboe girl, matriarch Mrs. Krum (Joan Cusack) is horrified. She gives a stern lecture to the young man about never associating with the Ellingboes.

Jesper continues delivering the packages from Klaus at night. The two clans gradually begin putting aside their feud to associate with each other, much to the consternation of Mr. Ellingboe and Mrs. Krum. They are displeased at the advent of book clubs and brunches. So they agree to bury the hatchet to fight the threat of Jesper and Klaus.

The beginning of the picture is quite bleak. Smeerensburg is all foreboding grays and dark tones. The ice and snow add to the harshness. The townsfolk are portrayed as weapon-carrying malcontents. The violence is cartoonish, more along the lines of the Three Stooges or Looney Tunes, but it does occur.

I was worried that the film would never recover from this barren portrayal. But part of the filmmakers’ savvy was to add color as the townspeople set aside their differences. It is subtle at first, but in the end the change is marvelous.

The script is very cleverly written as well. The origins of how the reindeer came to fly and how Santa gives a lump of coal to bad children are very funny. In fact, the screenplay organically inserts different elements of the Santa story in a seamless way. The lack of contrivance is so welcome.

Another way in which the movie could have degenerated is in the eventual confrontation between Jesper’s supporters and himself when his true motives for wanting letters sent are discovered. The clichés of banishment and atonement are minimized, though, which I found refreshing.

There is an interesting subplot about a Saami girl and her clan. The role they end up playing in the tradition is lovingly rendered. The credits indicated that there was a Saami consultant on the film.

The animation is very angular and geometric. While not my favorite style, it became less of a distraction for me as the story wove its charm. There are some magical sequences when the wind blows and provides inspiration for Klaus.

Having been raised on a diet of Stooges and Looney Tunes, the cartoon violence did not upset me. But it may be a consideration for some parents. While gifts eventually are delivered at Christmas, there is no mention of Christ or the Christian religion.

I will say that it would be a shame to miss out on one of the most creative Christmas stories in a long time. The story ends up being heart-warming and a definite feel-good piece of cinema.

When Jesper distinguishes himself as the postal academy’s worst student, he is stationed on a frozen island above the Arctic Circle, where the feuding locals hardly exchange words let alone letters. Jesper is about to give up when he finds an ally in local teacher Alva, and discovers Klaus, a mysterious carpenter who lives alone in a cabin full of handmade toys. These unlikely friendships return laughter to Smeerensburg, forging a new legacy of generous neighbors, magical lore and stockings hung by the chimney with care.

The new animated film “Klaus,” produced by Netflix, starts out bleak but comes around to provide a new origin story of the beginnings of Christmas. The film cleverly introduces characters and concepts related to the tradition of Santa bringing presents to children.