It is well known that “Motherless Brooklyn” is a passion project for Edward Norton, who stars in and directs the film. He captures the spirit of film noir in his depictions of 1950’s New York City and the investigation to solve the mystery of who killed his mentor. Yet the movie fails to completely engage the viewer with its characters and has a story that, while thoughtfully presented, is too long and not compelling.

The picture begins with Lionel Essrog (Edward Norton) waiting in a car with his colleague Coney (Ethan Suplee) for their boss, private detective Frank Minna (Bruce Willis), to show up. Lionel has Tourette’s syndrome and this becomes apparent as he communicates with others. By contrast, when Lionel provides narration for the film, his thoughts do not have the verbal characteristics of Tourette’s syndrome. 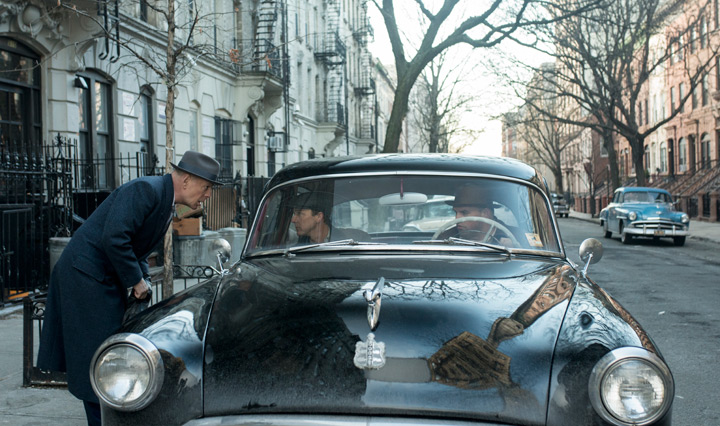 Frank is meeting some people about a case he has been working on. He places Lionel at a phone booth and dials the number from the office phone, hiding it in a half-open drawer, so that Lionel can listen in on Frank’s conversation with these men. Lionel also has an eidetic memory, which in the lower-tech 1950’s has proven useful to Frank.

Things go awry when Frank is forced into a car with some of the men. Coney and Lionel pursue in their vehicle but lose track of the other automobile. When they find it, they see Frank get shot. They race to the hospital but Frank dies on the operating table from blood loss.

Back at Frank’s detective agency, we learn that all four of the people he hired to help him were from orphanages in Brooklyn. Lionel was placed there after his mother died, so Frank sometimes called him “Motherless Brooklyn.” Despite his co-workers not being fully invested in searching for Frank’s killer, Lionel feels that he owes it to Frank to find out who murdered him.

His search leads him in various directions. One of these involves the condemnation of buildings by the Borough Authority, an amorphous political entity, run by the ruthless Moses Randolph (Alec Baldwin). At a hearing involving this subject, Lionel adopts the guise of a reporter and bonds with a heckler, Paul (Willem Defoe), when they are ejected from the gathering.

Another avenue of inquiry involves a jazz club in Harlem. Laura Rose (Gugu Mbatha-Raw), a person of interest in the investigation, resides there with her uncle while working to counteract the policies of Randolph.

As Lionel continues his research, he discovers who Paul really is and begins to dog him for information. Still in his reporter guise, he befriends Laura at a building site. 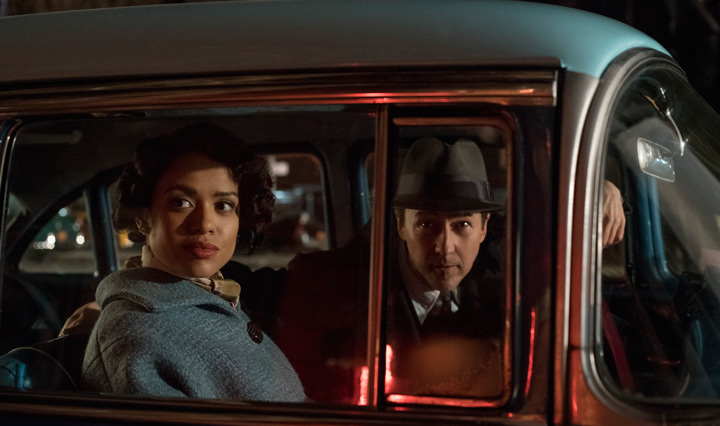 Lionel discovers that, despite the promise to relocate residents displaced by the building condemnations, this is not occurring. More dangerously to him, he starts to unravel the relationships between the Authority and the businesses that it works with. As he gets deeper and deeper into the world that Frank had become involved with, he is put at risk and beaten up twice.

But there is an even deeper secret that Frank uncovered about Moses Randolph and made it necessary for him to die. When Lionel discovers the truth, he and others become targets that need to be eliminated.

I have not read the book, but it takes place later in the 20th century. The move by Norton to change the time frame works to his advantage in several ways.

The production design is excellent. This includes the details from furnishings to automobiles. The buildings and street sets successfully evoke the period.

The costumes are well-done. Since we are dealing with working-class people, these are not the fancy garments of the wealthy. So they may not at first glance attract much attention. But the thought that went into their creation is noticeable.

The cinematography is simply spectacular throughout this movie. The framing of scenes and the positioning of the camera add so much to the quality of the picture. This is a film in love with the visual image. The jazz flourishes in the score and performances in the jazz club add an aural vibe of the era.

All of these elements augment the story in a way that I doubt that the original time setting of the novel would have been able to accomplish. The movie is a treat for the eyes and musical ear.

Although Lionel has Tourette’s syndrome, the picture gets credit for not making that the focus of the film. It is a part of who he is as a person, but it is not his essence. However, his character is not that interesting. He leads a simple life and seems to have no interests outside of his job and his quest for justice. Norton nevertheless gives a bravura performance.

In fact, he is not alone as the entire movie is a case where the acting is uniformly excellent but the characters end up being sketches. Despite the film being a long 144 minutes, providing ample time for development, it just doesn’t happen.

Alec Baldwin as Moses Randolph does make use of his brief scenes to embody the persona of someone interested in having power to accomplish his vision at the cost of everything else. His character clearly is based on the historical Robert Moses.

The story itself is not compelling. You don’t care enough about Lionel or anyone else for that matter so you are not fully engaged. The script, which reads more like a novel than a screenplay, is padded with scenes that could have been shortened or excised. The twists and turns that do occur end up being diminished by the time it took to arrive there. I also saw at least two parallels to “Chinatown” in terms of plot points. Whether or not these are in the book I cannot say, but it made the picture feel derivative.

Yet, despite these flaws, the film does capture the spirit of film noir. The movie succeeds in portraying the complexities that come with power and its exercise. While film noir often is associated with black and white, I would argue that ultimately it is about the gray areas of life and personal conduct, the nuances of right and wrong. Of course the production values also add to the noir atmosphere.

Sometimes I yearn for the days of intermissions for long movies. “Motherless Brooklyn” is worth watching but perhaps better on DVD than in the theater. Its eye and ear candy make up for what it lacks in character development and writing. If nothing else, you will want to watch the performance of Edward Norton as Lionel Essrog.

Set against the backdrop of 1950s New York, “Motherless Brooklyn” follows Lionel Essrog (Edward Norton), a lonely private detective living with Tourette Syndrome, as he ventures to solve the murder of his mentor and only friend, Frank Minna (Bruce Willis). Armed only with a few clues and the engine of his obsessive mind, Lionel unravels closely-guarded secrets that hold the fate of the whole city in the balance. In a mystery that carries him from gin-soaked jazz clubs in Harlem to the hard-edged slums of Brooklyn and, finally, into the gilded halls of New York’s power brokers, Lionel contends with thugs, corruption and the most dangerous man in the city to honor his friend and save the woman who might be his own salvation.

The story itself is not compelling. You don’t care enough about Lionel or anyone else for that matter so you are not fully engaged. The script, which reads more like a novel than a screenplay, is padded with scenes that could have been shortened or excised. The twists and turns that do occur end up being diminished by the time it took to arrive there.

Yet, despite these flaws, the film does capture the spirit of film noir. The movie succeeds in portraying the complexities that come with power and its exercise. While film noir often is associated with black and white, I would argue that ultimately it is about the gray areas of life and personal conduct, the nuances of right and wrong. Of course the production values also add to the noir atmosphere.