The “Fallen” franchise (“Olympus Has Fallen,” “London Has Fallen”) has proven to be at the very least an employment vehicle for Gerard Butler. The last installment, “London Has fallen,” had plenty of action but also plenty of wearingly unbelievable plot devices.

So you can imagine my surprise when the latest venture, “Angel Has Fallen,” despite its use of similar ludicrous plot twists, turned out to be an enjoyable action film. This largely is due to the acting chops of veteran Nick Nolte, in a bravura performance, and the always superlative Morgan Freeman.

The picture begins with an opening action sequence where you cannot tell who is fighting each other as it is set in a dark building with no discernable uniforms. It turns out to be a training exercise for Secret Service agent Mike Banning (Gerard Butler) at Salient, run by Wade Jennings (Danny Huston). Banning and Jennings go way back to their military days.

Then we switch to family life at home as we see Banning’s wife Leah (Piper Perabo) and their infant daughter interacting with him. Banning has pain issues, which we discover involve a spinal injury. But he has not confided these to his wife or employer as he has gone secretly to private doctors for treatment. 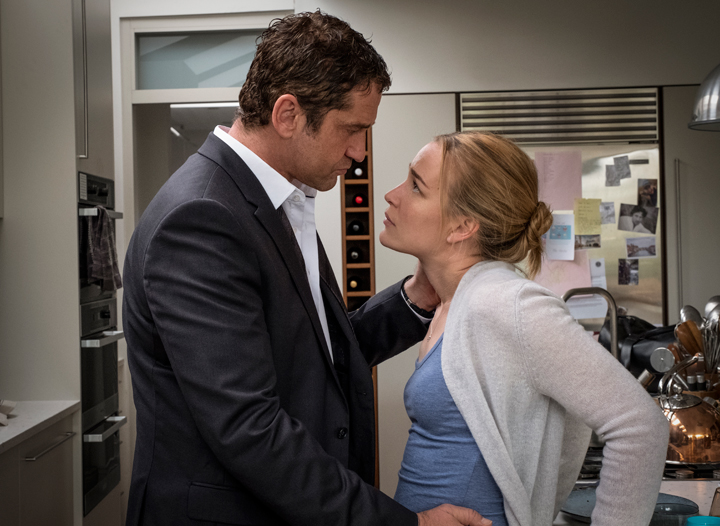 The domesticity continues as Jennings visits the Bannings for old time’s sake. He even crafts an origami animal for their daughter. He and Banning reminisce about the vitality of the action of the good old days. Banning agrees to put in a good word for Jennings’ company with his superiors. President Allan Trumbull (Freeman), however, has expressed his anti-war sentiments and desire to do away with military contractors.

The next thing you know Banning is accompanying the President on a fishing expedition. The array of security present is impressive. A series of drones, seemingly unstoppable due to superior technology, attacks. Banning is able to rescue President Trumbull before his boat explodes. The ordeal leaves Trumbull in a coma and Banning unconscious.

When Banning awakens, he is handcuffed to his hospital bed. He is informed by Agent Thompson (Jada Pinkett Smith) that he is suspected of plotting the entire attack. His DNA was found at the site of an abandoned van used in the attack. He also has an offshore account with millions of dollars in it linked to Moscow and a secret file on the Dark Web.
Of course the only way to solve this problem is to escape. Banning is able to do so when the convoy escorting him to prison is waylaid by unknown people who execute his captors and then take Banning hostage. He is able to subdue them and the chase is on.

He ends up going to a remote cabin in West Virginia occupied by his Vietnam vet dad, Clay Banning (Nolte), who abandoned Banning and his mother years ago due to his PTSD. Banning has kept track of his Dad using his government resources, which irritates Clay’s fear of Big Brother. Soon they are attacked by Salient agents, whom they defeat in spectacular fashion. Then they are off together to clear Banning’s name. 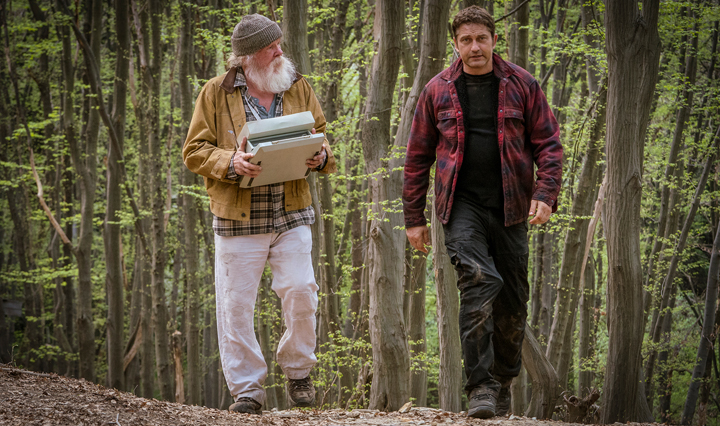 This film reminded me so much of “Fast and Furious presents: Hobbs & Shaw.” Both amount to being superhero vs. supervillain pictures. Here the evil Salient, led by Wade Jennings, can penetrate anything electronically while the U.S. government just stands by and does nothing with its technology. They can even fly a helicopter over a crime scene where the President is being pursued without being shot down or even challenged by any military intervention whatsoever.

Banning is able to escape any situation until he voluntarily chooses to surrender. He makes the most of his limited resources, so he also is part MacGyver. Despite being in pain due to a spinal injury, he can take all sorts of physical abuse. He also has a sidekick, his father.

So it is best to suspend logic when encountering serious holes or preposterousness in the plot. Just sit back and pretend that the action is occurring in some parallel universe to our own.

That being said, I have to admit that I find the whole use of technology to frame suspects to be a tedious deus ex machina. At least in this film they did have to leave some physical, aka DNA, evidence as well.

The visual effects and stunt work are astoundingly well done. From the drone attack to a chase involving a semi, they are pulse-pounding and exciting.

Nick Nolte as Clay Banning is a sensation. I almost didn’t recognize him beneath all of the facial hair. But his delivery of deadpan humor and anti-government propaganda is fabulous. His physicality and voice also add to his performance. He steals every scene that he appears in, and is not afraid to show that he is not super-buff in an end credits sequence. He elevates this film above normal action fare.

Morgan Freeman also is perfect as the President. He has the gravitas and the humanity to carry off this portrayal. It is easy to forget how skilled his acting is, due to his routinely fine performances. But there are scenes in this film where his subtlety as an actor kick in and demonstrate his superiority to the material in the script.

Another fine acting job is done by Jada Pinkett Smith, in her brief appearances as Agent Thompson. Tim Blake Nelson as the Vice President was another person who I almost didn’t recognize at first, but he does a good job in another minor role.

So go and enjoy the film for what it has to offer: no-holds-barred action, superb visual effects, and some excellent acting.

When there is an assassination attempt on U.S. President Allan Trumbull (Morgan Freeman), his trusted confidant, Secret Service Agent Mike Banning (Gerard Butler), is wrongfully accused and taken into custody. After escaping from capture, he becomes a man on the run and must evade his own agency and outsmart the FBI in order to find the real threat to the President. Desperate to uncover the truth, Banning turns to unlikely allies to help clear his name, keep his family from harm and save the country from imminent danger.

BASED ON: Characters Created by Creighton Rothenberger & Katrin Benedikt

“Angel Has Fallen,” despite its use of similar ludicrous plot twists, turned out to be an enjoyable action film. This largely is due to the acting chops of veteran Nick Nolte, in a bravura performance, and the always superlative Morgan Freeman.

So go and enjoy the film for what it has to offer: no-holds-barred action, superb visual effects, and some excellent acting.