Like most Jim Jarmusch films, “The Dead Don’t Die” is thought-provoking. It also has a cast of wonderful actors, some excellent dialogue, and humorous moments. Ultimately, though, the picture leaves you unsatisfied if entertained.

The action takes place in Centerville, a “nice place to live.” Chief Cliff Robertson (Bill Murray) and Officer Ronnie Peterson (Adam Driver) are in their patrol car going to the woods to find Hermit Bob (Tom Waits). The irascible Farmer Miller (Steve Buscemi) has accused Bob of stealing one of his chickens. This scene sets the stage for Hermit Bob to become an observer and commentator on the action that will ensue.

Weird environmental phenomena are starting to happen. The daylight hours are longer. Animals are starting to either flee or hide and attack their owners when confronted. Apparently polar fracking has altered the earth’s axis and magnetic fields. Of course, as we see on TV (a running gag with Rosie Perez as “Posie Juarez”) and hear on the radio, the government denies all such realities.

When night finally descends, two zombies (one of them Iggy Pop) emerge and head to the local diner. There they slaughter the owner and a cleaning lady. The next morning, Hank Thompson (Danny Glover) discovers the bodies and contacts the police. Chief Robertson and Officer Peterson are joined by Officer Mindy Morrison (Chloë Sevigny) at the crime scene. Peterson suggests that zombies may be involved. 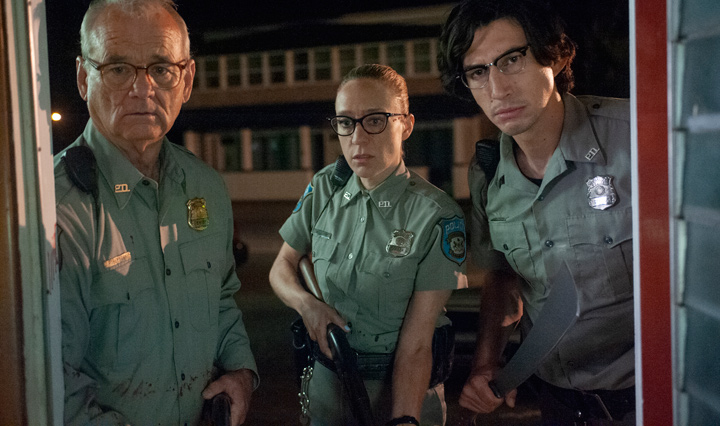 Back at the jail, the corpse of local inebriate Mallory O’Brien (Carol Kane) awaits pickup from the new undertaker, the Scottish Zelda Winston (Tilda Swinton). We see her meditating in front of a golden Buddha and then practicing moves with a samurai sword.

As night falls, other zombies arise and start wreaking havoc on the town. At the jail, Mallory resurrects demanding “Chardonnay.’ She is beheaded by Peterson, who knows that killing the head is the key. Winston is decorating (the only word that can be used) two bodies in the funeral home when they arise. She swiftly decapitates them with a brilliant use of her sword.

Winston, who makes turns only at a strict right angle, goes to the police station and offers to hold down the fort while the three police officials go out in their patrol car and try to warn the townsfolk to stay inside.

I have not included other subplots involving townsfolk. These include the owner of Bob and Stuff, a combo gas station/comic book/memorabilia store, a motel owner and a juvenile detention center.

This is the gist of the plot. It doesn’t sound particularly innovative or exciting. Indeed, the film is very low-key throughout. While some wonderfully eerie music with country twang is added by Jarmusch’s band, SQÜRL, often there is no music. This is when you realize how the score is pivotal to ramping up the emotions in a traditional horror movie.

But this is not your traditional horror movie. It is as much a commentary on consumerism as it is anything else. When the zombies wander around town, they chant and seek out what is most important to them. Coffee, toys and guitars are among the items desired. The soulless looks of the undead contribute to this critique of consumer culture. Why zombies then need to eat living people in addition to finding their obsession is never explained and dilutes the effect. 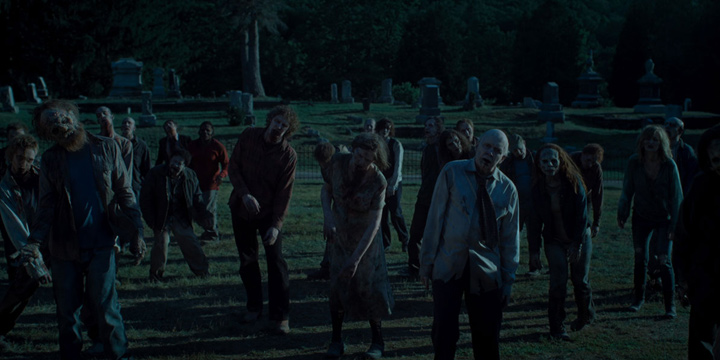 Another theme is being hip and what this means. Peterson owns a Smart Car and Morrison drives a Prius. Bobby Wiggins (Caleb Landry Jones) is mocked for his nerdiness by three young people traveling through town. The motel owner Danny (Larry Fessenden) refers to these three as hipsters from Pittsburgh and then, when told that their plates are from Ohio, as hipsters from Cleveland.

Throughout the script, there are knowing references to the audience. The fourth wall is not exactly broken, but characters refer to the screenplay and their role in it. The deadpan delivery by these accomplished actors adds to the humor. In addition, there are homages to pop culture throughout the film.

Ultimately, though, this knowingness undercuts the suspension of disbelief that you are watching a zombie movie. It creates a detachment from the subject matter. In a way, it is almost a meta-commentary on our own consumerism, as we expect a certain product but then are left unfulfilled by our viewing.

Yet, despite this, there are many wonderful elements in the picture. On a technical level, the composition of the shots is superb. The sets, such as the funeral home and the diner, also are top-notch.

I already mentioned the incidental music. But one recurring joke that fell flat with me was the song “The Dead Don’t Die” by Sturgill Simpson (who also plays the “Guitar Zombie”). Characters play it on the radio and on CD. All of them seem to know and love the song as if it were a #1 hit. There is nothing special about it as it is a classic country song but since it is a knowing reference to the film’s title, it drew some laughs from the audience. I was annoyed by its random reappearance, however.

Tilda Swinton excels as the odd undertaker. She fully embraces the essence of her weirdness. Watching her wield a samurai sword is breathtaking. I think that this is one of her finest roles since Snowpiercer. 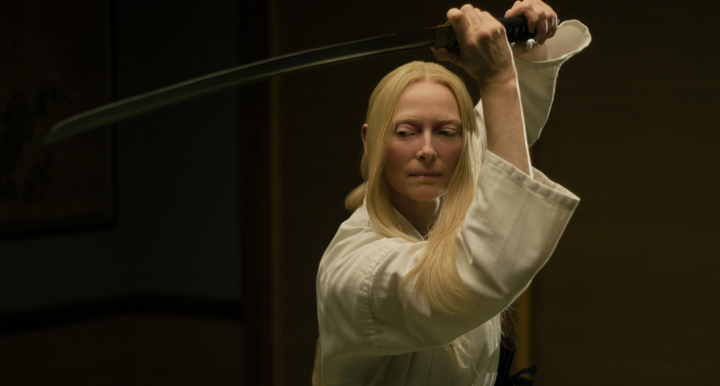 The acting in general, though, is so downplayed that individual performances tend not to stand out. Yet this merely amplifies how skilled these actors are in control and nuance.
It is hard to tell if Centerville is meant to symbolize the world before consumerism overwhelmed American culture. Are the soulless zombies of consumption the spoiler of this idyllic setting? Is it futile to try to fight them off? Hermit Bob has the last line of the film: “What a f*cked-up world.” Is this the conclusion of the director?

So I can say that I thoroughly enjoyed the acting and was never bored by any of the action. I did find several humorous moments that entertained me. But I left the movie feeling as though I had watched an exercise in film technique, however good, rather than a film. I do not believe that the picture succeeded in obtaining its objectives.

Three and a half out of five stars.

In the sleepy small town of Centerville, something is not quite right. The moon hangs large and low in the sky, the hours of daylight are becoming unpredictable, and animals are beginning to exhibit unusual behaviors. News reports are scary, and scientists are concerned, but no one foresees the strangest and most dangerous repercussion that will soon start plaguing Centerville: the dead rise from their graves and feast on the living, and the citizens must battle to survive.

Like most Jim Jarmusch films, “The Dead Don’t Die” is thought-provoking. It also has a cast of wonderful actors, some excellent dialogue, and humorous moments. Ultimately, though, the picture leaves you unsatisfied if entertained.

So I can say that I thoroughly enjoyed the acting and was never bored by any of the action. I did find several humorous moments that entertained me. But I left the movie feeling as though I had watched an exercise in film technique, however good, rather than a film. I do not believe that the picture succeeded in obtaining its objectives.