Happy Death Day 2 U is a worthy successor to the original Happy Death Day, which was a breath of fresh air in the horror genre. It continues to be innovative, fun, imaginative and a good time at the cinema.

For those who didn’t see the original film, it was essentially “Groundhog day” meets “Scream.” Tree Gelbman (Jessica Rothe) is a selfish student at Bayfield University. Bayfield has a creepy baby mascot and an even creepier baby mask based on that mascot. Tree ends up being murdered at the end of her birthday by a cloaked figure wearing the baby mask. Bizarrely, after her killing, she wakes up in the dorm room of Carter Davis (Israel Broussard) again. It is still her birthday.

Tree goes through a succession of the same birthdays, with each ending in her dying in some way. However, in a unique twist, her body is failing because each death takes a cumulative toll, even though she is not actually dead. She must find out who is trying to kill her and stop her own murder to end the looping. She also manages over time to become a better person and face up to her grief over her mother’s death.

The new film takes place on the morning of her success in ending the cycle. It is now the day after her birthday, and she is in Carter’s dorm room, making out with him. We see Carter’s roommate Ryan (Phi Vu), who was a peripheral character in the first movie, waking up in his car where he has slept so that Carter and Tree could be alone.

Ryan is involved in a physics project with his student colleagues Dre (Sarah Yarkin) and Samar (Suraj Sharma). They have created a machine that can alter the space-time continuum, although they do not completely understand what is happening. It has shown a boost in activity overnight. Dean Bronson (Steve Zissis) enters the lab and complains about the machine’s causing power outages. Deserted by his colleagues, Ryan alone is told that the project must be shut down.

When Ryan goes to a nearby dark chemistry lab to find Dre and Sumar, he is murdered by the same cloaked baby-mask-wearing murderer as Tree was in the first film. Now it is he who wakes up to the same morning as before in his car. Freaked out, he enters his dorm room and confesses what has happened to him. Tree of course knows what is going on and they construct a plan to find his murderer. 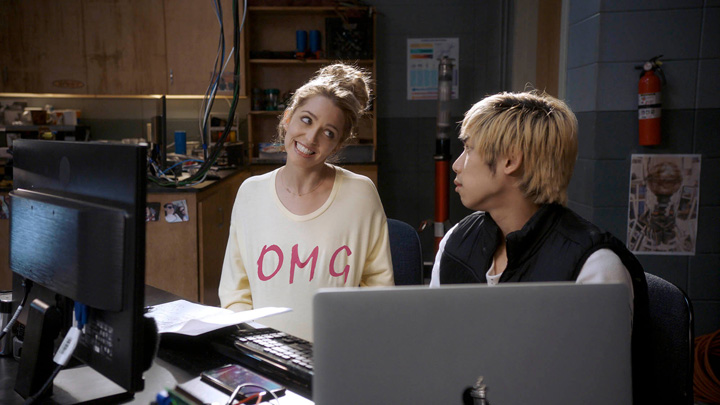 That night at a basketball game, an emergency evacuation takes place. Ryan is separated from his friends and is pursued to the basement of the gym by the killer. This time, however, the friends manage to subdue the killer. When they pull the mask off, it is another Ryan! This new Ryan warns them not to re-activate the machine, which they want to do to send him back to his own parallel universe. But they do it anyway.

All seems to be well, until Tree discovers that her world is altered. Carter is now in love with Danielle (Rachel Matthews), the smug head of Tree’s sorority. Danielle is now a do-gooder, instead of being selfish. More incredibly, Tree’s mother is still alive. Worse, Tree dies again at the end of her birthday.

She and her friends conclude that she is in a parallel world in the multiverse. The only solution is to use the machine to send her back to her original world. But Tree must make a choice. Once the looping has stopped so that she stops dying, does she want to stay in this world, where her mother is alive but Carter is not her boyfriend, or go back to her original world, where Carter is her true love but her mother is dead?

One of the strong suits of this series is that it never takes itself too seriously. As an example, multiple variable algorithms must be eliminated to find the one that works to set the worlds in correct alignment. But this will take longer than a day. So Tree must die multiple times and memorize the failed algorithms so that progress can be made. Instead of allowing herself to be murdered each day, she finds imaginative ways to commit suicide. One time she jumps into a wood-shredder, another time she drinks drain cleaner in a grocery store, and another time she skydives to her death, landing in front of Danielle and Carter making out. It becomes a parody of killing oneself.

The actors pick up with the characters as if no time at all has elapsed between films. This consistency is a positive in taking the viewer in a believable fashion along this new path.

The acting is surprisingly good for a low-budget film. Rothe was excellent in the first movie, and continues to grow as a character in this one. Whereas her dilemma before was changing an unlikeable protagonist who multiple people would have been glad to kill to a more complex and caring one, this time her personal growth revolves around the choice of whether to hold on to the relatively secure past or move on into a riskier future.

Broussard and Matthews are effective as new lovers. The real new star is Vu as his character expands into a full one. He and his two colleagues Sharma and Yarkin are quintessential nerds but in an endearing way. Zissis is perfect as a stereotypical pontificating, self-righteous dean.

The real challenge of the film is standing on its own for moviegoers unfamiliar with the original. I do not think that it succeeds on that score, as evidenced by the comment at the end of the screening by one audience member. There is too much built into this sequel that is predicated on the first picture. Not only are there nuances that a first-time viewer will miss, but the investment in the characters is just not going to be present.

So I would not recommend this film for anyone who has not seen the first one. Rent and view the first movie, then see this one.

But for those who have seen Happy Death Day, I highly suggest that it is worth your while to come out to the cinema and see this sequel. While it could not hope to be as radically new as the first one, which I gave four and a half stars, this new addition continues the series in a fun and entertaining way.

Rating: Three and a half out of five stars

Jessica Rothe leads the returning cast of Happy Death Day 2U, the follow-up to Blumhouse’s (Split, Get Out, The Purge series) surprise 2017 smash hit of riveting, repeating twists and comic turns. This time, our hero Tree (Rothe) discovers that dying over and over was surprisingly easier than the dangers that lie ahead.

Happy Death Day 2 U is a worthy successor to the original Happy Death Day, which was a breath of fresh air in the horror genre. It continues to be innovative, fun, imaginative and a good time at the cinema.

I would not recommend this film for anyone who has not seen the first one. Rent and view the first movie, then see this one.

But for those who have seen Happy Death Day, I highly suggest that it is worth your while to come out to the cinema and see this sequel. While it could not hope to be as radically new as the first one, which I gave four and a half stars, this new addition continues the series in a fun and entertaining way.