I’ve liked Aquaman ever since I was a kid, from the cool Mego toys to the kid friendly cartoons, something about the character has always connected with me. However, for many people, Aquaman is borderline absurd. In fact, for years comedians have riffed on his inadequate super powers and goody two shoes demeanor. I believe the root of this can be attributed to the 1970’s Super Friends cartoons and his campy talking to fish abilities. Recent comic book portrayals have addressed those perceptions and in turn have presented a more serious yet flawed hero struggling with his role as a king and strained relationship with humans.

When it was announced that Jason Momoa would play Aquaman (Justice League) many fans were unsure of the casting. After-all, the classic attributes of Aquaman where nowhere to be found with the casting of Jason. I myself was unsure due to a lack of trust I had in Zack Snyder and Warner Brothers. So, is my cynicism towards the casting justified or does Jason deliver a worthy/believable performance as Aquaman?

Directed by James Wan (The Conjuring, Furious 7) Aquaman picks up right after the events of the previous Justice League film. Of course, you needn’t watch JL to fully comprehend the simplistic story of Aquaman. In some ways, the origin story feels like a cheapened version of Shakespeare’s Romeo and Juliet. 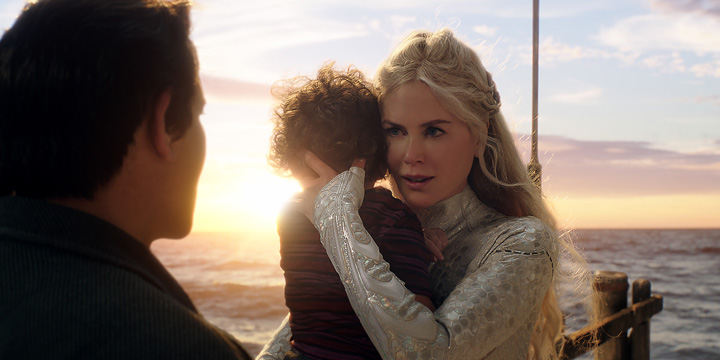 Arthur Curry’s (Jason Momoa), human father serendipitously fell in love with the Queen of Atlantis (Nicole Kidman) and as such soon gave birth to a child named Arthur. Upon learning of this betrayal to her kingdom, the Queen is forced back to Atlantis to answer for her actions. As Arthur grows older he is often visited and trained by an Atlantean named Vulko (Willem Dafoe) who teaches him the Atlantean ways and how to use his powers. As time passes, Arthur grows more self-aware of Atlantean culture and demands more answers about his mother’s whereabouts.

During this time, Arthur is visited by the princess of the kingdom of Xebel named Mera (Amber Heard) who desperately needs help finding a powerful trident that’s hidden somewhere on the Earth’s surface. Arthurs half-brother King Orm (Patrick Wilson) is a ruthless, warmongering tyrant who wishes war against humanity to pay for their and blatant disregard polluting the oceans. Fearing the worst, Arthur doesn’t wish to get involved, but because of his lineage recognizes only he can retrieve the legendary trident and save our world from certain peril.

What I liked most about Jason Momoa’s performance as Aquaman is the vulnerability he brought to the character. On the outside we see a cocky superhero but beneath that exterior is a boyish uncertainty that is afraid of failure. Ultimately Jason’s performance helped extend my interests in the movie which unfortunately is marred with attributes of mediocrity. 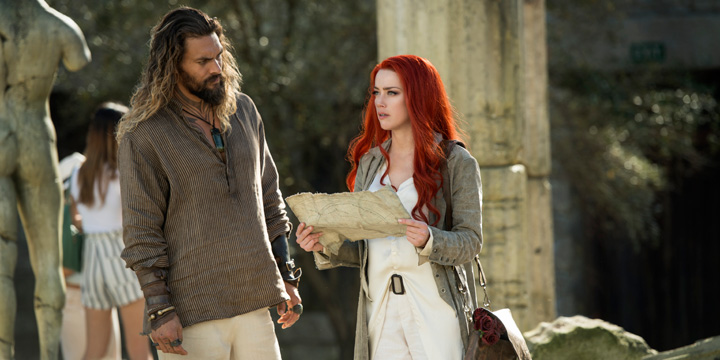 Full of expounding word play, Aquaman assumes the viewers are brainless and are perfectly ok with overwrought CGI effects and stale hero shots. While for some, that may be acceptable, for me, it needed mores substance to justify the enormity of each action sequence. While I admire many things about Aquaman, the biggest flaw is the atrocious dialogue and poorly directed chemistry between Jason Momoa and Amber Heard. In fact, the relationship between Mera (Amber Heard) and Arthur never feels natural and quite honestly is hampered by cheesy one-liners that really made each scene painful to watch.

With Aquaman, Director James Wan has created an intriguing world filled with wonderful characters and intriguing possibilities. It’s just a bummer the wonderment of Atlantis is soiled by shoddy writing and suspect casting choices. In the end, I suspect many will enjoy Aquaman for what it is, a fun popcorn film that is entertaining regardless of it’s limitations. Let’s just hope future sequels include a new dialogue writer!

“Aquaman” spans the vast, visually breathtaking underwater world of the seven seas and reveals the origin story of half-human, half-Atlantean Arthur Curry (Jason Momoa), which takes him on the journey of his lifetime—one that will not only force him to face who he really is, but to discover if he is worthy of who he was born to be…a king.

Full of expounding word play, Aquaman assumes the viewers are brainless and are perfectly ok with overwrought CGI effects and stale hero shots. While for some, that may be acceptable, for me, it needed mores substance to justify the enormity of each action sequence.

In the end, I suspect many will enjoy Aquaman for what it is, a fun popcorn film that is entertaining regardless of it’s limitations. Let’s just hope future sequels include a new dialogue writer!