“Spider-Man: Into the Spider-Verse” is a brilliant new cinematic take on the original Spider-Man. This action-packed animated film has a stunning visual look and an array of intriguing characters.

The story begins in an alternate version of New York City. Miles Morales (Shameik Moore) is reluctantly preparing to leave his Brooklyn home to go to a prep school, where he will live in a dorm room and come home on the weekends. While in school, he attends a science class where a video talks of parallel universes.

After school, Miles sneaks out and goes to see his Uncle Aaron (Mahershala Ali) in Brooklyn. They go out and create a mural in an abandoned subway section. While there, Miles is bitten by a radioactive spider. Returning to school, he starts to experience weird symptoms. While flirting with his crush Gwen (Hailee Steinfeld) his now sticky fingers get caught in her hair and create a scene.

Miles correctly connects his symptoms to the real Spider-Man. He goes back to the subway and finds the dead spider with a 42 marked on it. Then he stumbles on a battle going on between the real Spider-Man, Peter Parker (Chris Pine), and the Kingpin (Liev Schreiber).

The Kingpin, with the help of Doc Ock (Kathryn Hahn), is creating a machine to disrupt the forces that separate the different universes. Kingpin wants to bring back his wife and son from a parallel world, as his own wife and child were killed when they fled from him after they realized that he was a criminal.

Of course such an activity is inherently dangerous and Spider-Man tries to stop it. When Spider-Man is injured, he is able to give Miles a drive to destroy the machine. Spider-Man then is killed and Miles is spotted by Kingpin and his cronies, which puts his life in peril.

Meanwhile, on another Earth, Peter B. Parker (Jake Johnson) has messed up his marriage to Mary Jane and is now paunchy in his mid-40’s. When the continuum is disrupted by Kingpin, he ends up in Miles’ world, where Peter B. will die if he is not able to return to his own Earth. Miles accidentally destroyed the drive that the original Spider-Man gave to him that could take down Kingpin’s machine. So together Miles and Peter B. go to the lab where the information is stored to create a new drive. 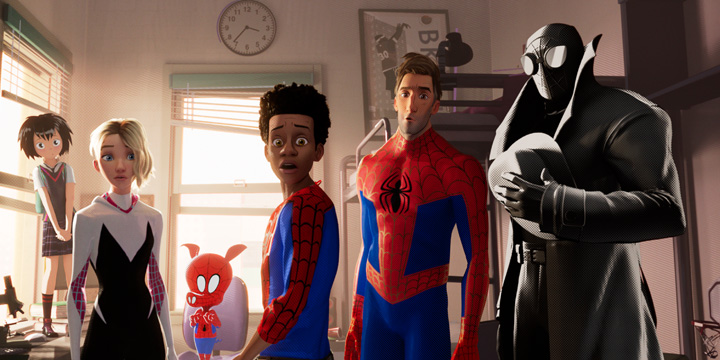 Along the way, we discover that more than Peter B. Parker has appeared in this version of Earth. Spider-Gwen (from the school), Spider-Ham (John Mulaney), Spider-Man Noir (Nicolas Cage), and Peni Parker (Kimiko Glenn) and her robot soon help Peter B. and Miles in trying to get back to their own universes and taking down Kingpin.

There can be no understating of how refreshing it is to see different versions of Spider-Man. Each contributes something unique to the mix, both in dialogue and in character development. Other characters such as Miles’ father Jefferson (Brian Tyree Henry), Uncle Aaron, and Aunt May (Lily Tomlin) are given depth even though they have less screen time.

The film has the look and feel of a comic book come to life. The colors have the vivacity that a colorist would use in creating a print piece. There are occasional split screens that mimic the frames of such a work. Sometimes there are graphic representations of words being expressed by the characters or sounds that are made. The visuals are top-notch in all respects.

The style that was used to draw the characters, such as Spider-Ham and Spider-Man Noir, is retained here in the movie. This provides a different kind of texture to the eye as you absorb these differences in the same frame.

The plot involves the usual soul-searching of a superhero, mostly embodied by Miles as he deals with his new identity. Unlike other superheroes who have no one with whom they can share similar experiences, Miles has the other Spiders to help him deal with issues such as loss.

The relationship between Miles and his father is well-done, if a bit predictable. His mother gets short shrift, though, and it would have been nice to have her be more of a presence in the movie.

There is quite a bit of humor in the film as one would expect. A recurring gag where each Spider quickly recounts their origin story is a highlight. These lighter scenes are counterbalanced by the intense action sequences, which are engaging and varied.

I was a little alarmed when I saw the running length of this film as being almost 2 hours. Animated pictures directed at young audiences usually average 90 minutes or less. This movie is clearly aimed at a larger audience. It has an appeal that spans all age groups. It is not too scary for grade-school children and has an engaging, relatable hero.

There is a nice homage both in the movie proper and in the end credits to Stan Lee. You also will want to stay to the end of the credits, as usual for a Marvel film.

The New York and Los Angeles film critics both named ‘Spider-Man: Into the Spider-Verse” as the best animated picture of the year. It is an honor well-deserved for such an impressive display of story and visual grandeur.

Rating: Four out of five stars

Phil Lord and Christopher Miller, the creative minds behind The Lego Movie and 21 Jump Street, bring their unique talents to a fresh vision of a different Spider-Man Universe, with a groundbreaking visual style that’s the first of its kind. Spider-Man™: Into the Spider-Verse introduces Brooklyn teen Miles Morales, and the limitless possibilities of the Spider-Verse, where more than one can wear the mask.

Spider-Man: Into the Spider-Verse

“Spider-Man: Into the Spider-Verse” is a brilliant new cinematic take on the original Spider-Man. This action-packed animated film has a stunning visual look and an array of intriguing characters.

The New York and Los Angeles film critics both named “Spider-Man: Into the Spider-Verse” as the best animated picture of the year. It is an honor well-deserved for such an impressive display of story and visual grandeur.