What would you do if found an alien ray-gun? This is the dilemma faced in “Kin,” a tale that examines the meaning of family against a background of gangsters and science fiction.

Based on the short film “Bag Man,” released in 2014, “Kin” expands the premise of a young boy stumbling upon an alien weapon. The movie begins with an explosion occurring in an abandoned factory. Later 14-year-old Eli Solinsky comes to the location and finds what appear to be dead alien humanoids in spacesuits. He freaks out and runs.

Eli has been suspended from school for fighting which displeases his father Hal (Dennis Quaid), who always seems to be spouting hard-knock wisdom to his son. Given chores to do while he is not at school, Eli goes back to the factory and discovers an alien ray-gun that he seems able to operate.

Jimmy, Eli’s older brother, is being released after six years in prison and is coming to stay with them. This reunion does not go well. Hal is not willing to give a recommendation for his son at the construction site where he works.

However, Jimmy owes $60000 to a local gangster, Taylor Balik (James Franco), for the protection Jimmy received in prison. When Taylor threatens his family, Jimmy goes to Hal and begs for a loan. Hal doesn’t have the money and so Jimmy wants him to rob the safe at work. Hal refuses, and kicks out Jimmy.

Hal and Eli go to the construction site, where the lock on the fence has been cut. Hal grabs a crowbar and enters the construction shack. He catches Taylor’s gang and Jimmy robbing the safe. Taylor kills Hal, and Jimmy kills Dutch, Taylor’s brother, setting up a revenge motif. 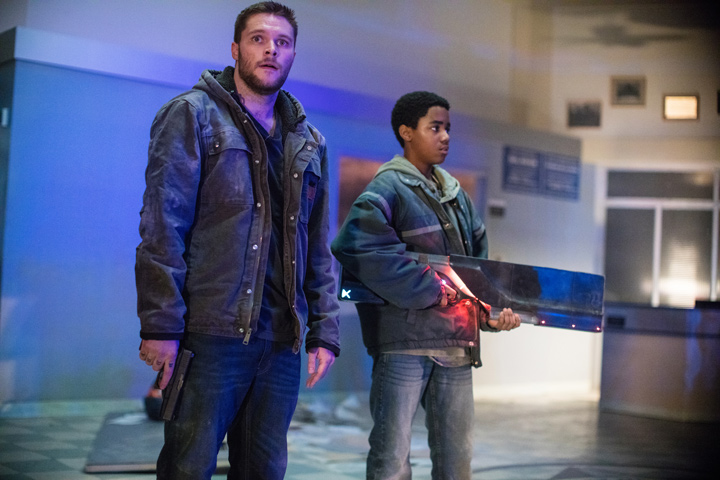 Meanwhile, two more humanoid aliens in spacesuits arrive at the abandoned factory looking for the ray-gun. They are able to trace that it is on the road, steal motorcycles and head out west in pursuit of Jimmy and Eli. Likewise, through a message Eli left on Hal’s phone, now in Taylor’s possession, the gang also is in pursuit of the two fugitives.

Jimmy, who always seems to be making bad choices, decides that he and Eli should go into a girls’ club. The performers are scantily dressed, but not nude. Jimmy is attracted to Milly (Zoe Kravitz), one of the dancers, and soon she and her friends are drinking at their table. When Jimmy tries to dance on stage with Milly, the club enforcers beat him up. Eli retrieves the alien weapon and wreaks havoc on a pool table. Milly escapes with them. Everything comes to a head at a Nevada casino, where the news flashes an APB for Jimmy and Eli, who are both detained for Hal and Dutch’s murders.

Family, and what it means to be “kin,” is a central theme of the film. While Jimmy and Eli are brothers, the fact that Eli was adopted as an infant looms large in making him feel second-best. Similarly, Jimmy tells Eli that he is a “replacement” son. Hal has given up on Jimmy but tries to be a good father to Eli. 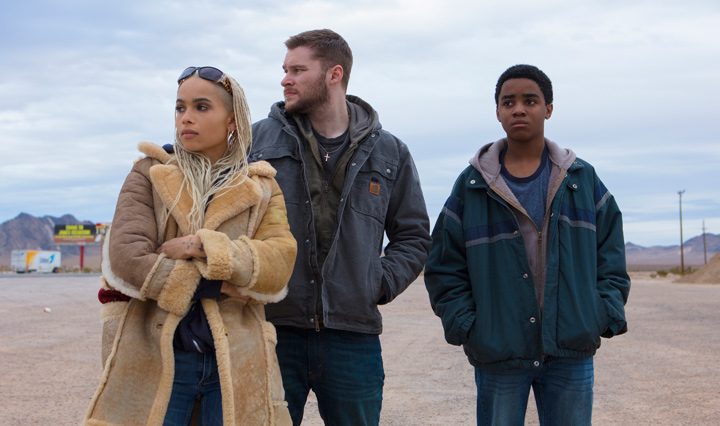 The road trip gives Jimmy and Eli a chance to get to know each other. They start to bond into a sense of brotherhood. This is threatened because Jimmy has not told Eli that Hal is dead. When this truth comes out, another rupture in their relationship occurs.
Milly is a good influence on Eli once she joins the team. They talk about their scars caused by abuse, although Eli cannot remember his hand being marked because he was too young.

The theme of family extends as well to the Balik brothers, Taylor and Dutch. At the funeral wake for Dutch, where he is on a bier next to a fire, Taylor gives an oration that extols his brother’s protective nature. The whole pursuit of Jimmy is more than the money he owes; it is a blood feud.

The ending of the film creates another sense of kinship, which I will not reveal. This brings the matter full circle.

I was a little disappointed that there were not more science fiction elements in the film. The short tended to focus on the weapon so immediately that I expected this to be a central core to the movie. When the second group of aliens appear, we see some of their GPS tech but not enough to be satisfying.

The ray-gun itself benefits from better visual effects than the short. However, it is rarely used until the end of the film when it becomes a major player.

The ending itself is so good that you wish that somehow the earlier parts of the film could have been infused with that essence. Much that was obscure about the weapon becomes clear. A sequel is definitely a possibility.

Zoe Kravitz gives the best performance in the film as Milly. She is street smart, but sensitive and caring in a totally believable way. Dennis Quaid seems to be playing to a type more than acting. James Franco does some major scenery-chewing, but doesn’t have much to work with as an excuse.

Myles Truitt plays quiet and introverted very well. His interactions with others could use some work. Jack Reynor as Jimmy has his moments when he allows himself to open up emotionally. But most of the time the character is playing a macho façade, which doesn’t allow for much stretching of the acting muscles.

Despite the fact that the road trip is overlong, I found myself wondering what would happen next. The potential for a science-fiction moment also propelled my interest. I truly cared about these characters.

For more about KIN, don’t miss our interview with directors Jonathan and Josh Baker!

While scavenging for copper wire, Detroit teenager Eli Solinski stumbles upon a high-tech gun that holds special powers. When his brother, Jimmy, lands in trouble with a local crime boss, the two siblings take the mysterious weapon and go on the run. Eli and Jimmy now find themselves in a life-and-death battle against an army of thugs and two heavily armored, futuristic soldiers who want their gun back.

What would you do if found an alien ray-gun? This is the dilemma faced in “Kin,” a tale that examines the meaning of family against a background of gangsters and science fiction. Based on the short film “Bag Man,” released in 2014, “Kin” expands the premise of a young boy stumbling upon an alien weapon.

Despite the fact that the road trip is overlong, I found myself wondering what would happen next. The potential for a science-fiction moment also propelled my interest. I truly cared about these characters.