Searching is simply a masterpiece of cinema. The film combines an innovative structure with a compelling mystery that keeps you rooted to your seat.

Traditional movies show actors directly through the lens of the movie’s camera. Sometimes there are shots of text in books, on computer screens or as explanatory text for the audience.

Director Aneesh Chaganty, in his feature film debut, has created a story where you never see an actor directly through the lens of the movie’s camera. Instead, when you do see people, they are in video clips, news flashes, on FaceTime, or on nanny-cams. Everyone is one step removed from the usual filmic process as the picture’s camera records these virtual images. Not only that, but all of the film is mediated through various computer and phone screens. It was amazing to me how easily my mind adapted to reading information on-screen and watching people interact via devices.

The technique could have been gimmicky except for the screenplay written by Chaganty and Sev Ohanian. The mystery is so good that if it had been a book, I would have recommended it to my mystery book club. There are plenty of red herrings. Clues present themselves, but as so often happens, our minds tend to overlook them in favor of more obvious interpretations. 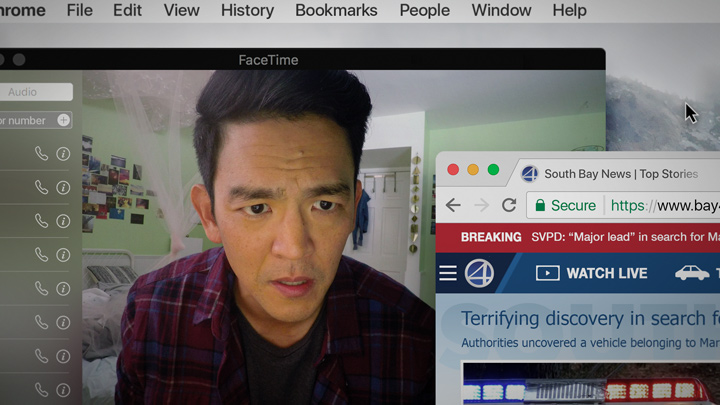 The narrative begins with the life of the Kim family: father David (John Cho), mother Pamela (Sara Sohn), and daughter Margot (played by 3 young actresses in the initial video montage and then as a teenager by Michelle La). We see Margot growing up, learning to play the piano, cooking with her mother, and engaged in celebrations, all through the use of recorded videos. Then we see an e-mail indicating that Pamela is seeing a doctor. We find out that she has cancer, has a remission, and then a relapse which leads to death.

In the present day, it is a Thursday night in May when David talks to his daughter, now in high school, who is at a friend’s house for a study group. She says that they will be studying late. We then see that she has tried to contact him multiple times while he slept. The next day, Friday, it slowly but surely becomes clear that something is wrong when she doesn’t answer her phone and has disappeared.

David contacts the police. Detective Vick (Debra Messing) is assigned to the case. She discovers film footage showing that Margot left town and had obtained a fake driver’s license. David becomes impatient and starts to search on his own.

He cracks Margot’s e-mail password and then is able to use this to re-set her passwords on other accounts so that he can access her data. Among his discoveries is that she has not been going to her piano lessons. He was giving her cash to pay her instructor. These payments have all been deposited into her bank account and then $2500 was withdrawn.

David also stumbles on videos which Margot recorded online, which reveal that he did not know his daughter as well as he thought he did. When Vick does not come up with leads, he figures out that Margot must have gone on the road out of town to a nearby lake. He finds her keys there. The police find Margot’s submerged car. She is not in it, although the $2500 is there as well as some blood. 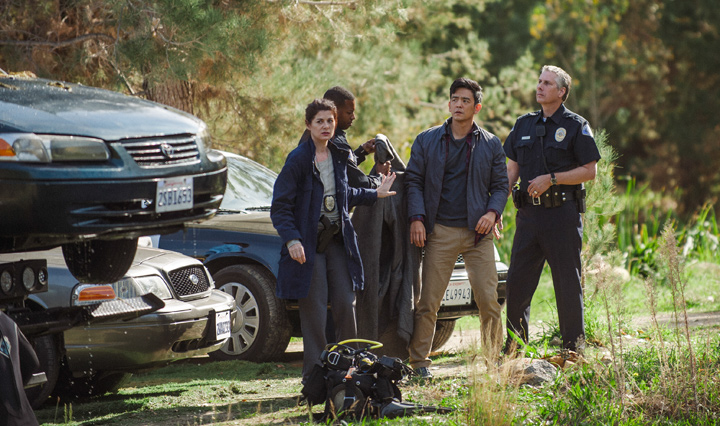 The police, led by Vick, recruit volunteers and their own forces to search the immediate area for Margot. Now the story is viral on the Internet. David is both consoled and vilified online. The mystery continues from there.

A central theme of this tale is how well do you know your own children? David thought that he was communicating well with his daughter, but clearly he is misguided. He suddenly realizes that he does not know her friends, for example. This is not an unusual family problem, but it speaks to how our perceptions of how well we communicate can be one-sided.

Instead of using the old-fashioned methods of discovery like diaries or journals, David watches Margot’s videos, which he knew nothing about, to find out who his daughter is. He is able to receive visual cues that no diary or journal could provide.

David is not the most technologically-aware person. When someone suggests that he check Tumblr for information on his daughter, he types in “Tumbler.” It was fascinating to see someone’s thought process unfold without spoken language as you see his attempts to search for clues.

One thing that I found striking is how we now live in an age where, if someone dies or disappears, we mourn not only their physical absence, but also their virtual absence. It was startling to me how affected I was by Margot’s virtual absence, in addition to her physical absence. This may have to do with the film’s technique, but even if this is so, it is a tribute to the filmmakers in how they succeed in evoking a response.

The movie also points out that online all is not as it would seem to be. There are perils in contacting strangers as well as benefits. But the screenplay is never didactic in making this point. Instead you simply observe this as the film moves along.

Cho and Messing give performances that are worthy of the level of brilliance exhibited by this movie. Joseph Lee as David’s brother Peter makes the most of his digital time on screen.

This picture advances the boundaries of cinema in a way so suited for our time. Its structural technique is on a level of genius akin to the marvelous use of the absence of sound in this year’s A Quiet Place.

So be prepared to experience something unique and thrilling when you go to see Searching. The denouement is superb.

After David Kim’s 16-year-old daughter goes missing, a local investigation is opened and a detective is assigned to the case. But 37 hours later and without a single lead, David decides to search the one place no one has looked yet, where all secrets are kept today: his daughter’s laptop. In a hyper-modern thriller told via the technology devices we use every day to communicate, David must trace his daughter’s digital footprints before she disappears forever.

Searching is simply a masterpiece of cinema. The film combines an innovative structure with a compelling mystery that keeps you rooted to your seat.

Traditional movies show actors directly through the lens of the movie’s camera. Sometimes there are shots of text in books, on computer screens or as explanatory text for the audience.

Director Aneesh Chaganty, in his feature film debut, has created a story where you never see an actor directly through the lens of the movie’s camera. Instead, when you do see people, they are in video clips, news flashes, on FaceTime, or on nanny-cams. Everyone is one step removed from the usual filmic process as the picture’s camera records these virtual images.