I’m a huge Marvel girl. I probably spent more on Marvel comics in the 80s and 90s than on food and clothing. The “X-Men” and most of the other Marvel mutants stories were my favorites, followed closely by “Daredevil”, “Doctor Strange”, “The Avengers”, “Marvel Team-Up, then most of the rest were either miniseries or limited series.

“Cloak & Dagger” was one of those titles, and for my money was the least likely on my list of Marvel characters who would end up being adapted for television. Call it a pleasant surprise with reservations. The comics origin story of Tyrone and Tandy was problematic (trope-laden) back in the 80s, and that version would be even more cringeworthy these days. Even years later in the comics when the nature of their powers kept shifting, both individually and combined, they could never truly shake off the stereotypes of those original origins.

When it was announced that Cloak & Dagger was being adapted and would air on Freeform, I thought there was potential there. At the time I thought Netflix would have been a better home, given that in the comics Ty’s Cloak and Tandy’s Dagger were also part of the darker, grittier New York streets that Matt Murdock, Jessica Jones and Luke Cage walked, and they had strong direct connections with Daredevil, Doctor Strange, Spider-Man and the Runaways. But I’m a big fan of what Freeform has done with some of its original programming since the network name change (huge fan of Stitchers, and more recently, their new supernatural drama Siren), and given the ages of Ty and Tandy, that’s right in the story wheelhouse Freeform’s aiming for.

Changing the location of their story from New York City to New Orleans, and pulling the focus away from their original mission to eliminate the drug trade and move towards something bigger was a bold move that is paying off well beyond my initial hopes. Putting our heroes in the middle of a city still struggling to recover both economically and ecologically from major environmental disasters, and connecting their powers to the causes and effects of those disasters lends a powerful and realistic emotional link to the characters and their home.

Another change that adds a few new layers to the characters and the story is switching up the back stories of both Tyrone Johnson (Aubrey Joseph) and Tandy Bowen (Olivia Holt). In the comics, Ty was from the streets and Tandy was from a privileged home; here in the TV adaptation, Ty as a teenager is living a life in private schools and in high profile high school athletics, while Tandy had been living a good middle class life until her father Nathan died in a car accident and was posthumously blamed for a tragic explosion on a Roxxon research platform. The destruction of his legacy and reputation sent Tandy’s mother Melissa into a spiral of addiction and neglect, altering Tandy’s path to one of being a loner and a grifter. 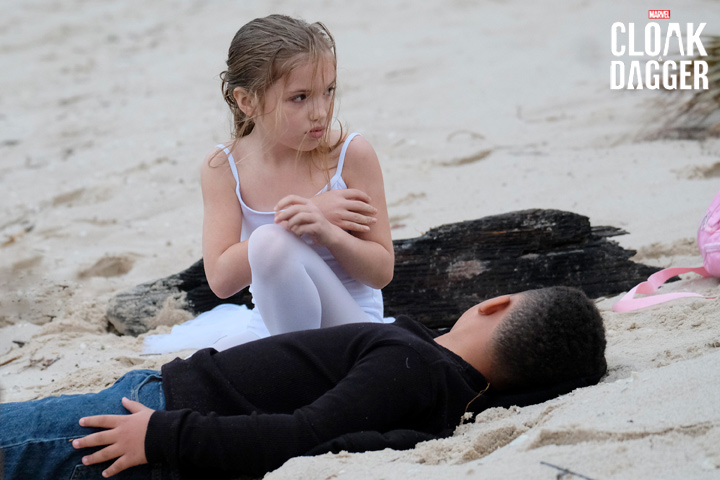 We begin with seeing various events in both their lives unfold after tragic events that all take place on the same night, the night when a huge storm hits the city and the Roxxon platform explodes. Both Ty and Tandy as young children end up underwater in the Gulf — Tandy having been a passenger in the car when her father’s accident propels them off a bridge, while Ty witnesses his older brother Billy falling off the docks after being shot by a police officer, then dives into the water after him, hoping to save his life.

Both children make a connection underwater, manifesting the darkness and the light, but they end up on the shore in the morning, together and alone. Tandy runs away before Ty wakes up, and they never see each other again until a chance encounter 8 years later at an outdoor high school party, where Tandy chooses Ty as a mark to pickpocket. He chases her after discovering what she’s done, and the explosive result of them touching activates their powers and triggers both recognition and remembrance of the night of the storm.

They try to continue living their lives as normal, but more events occur that continue to bring them together as well as hint at their connection to each other, and also to dark secrets that threaten the city and everyone who lives in it.

Ty slowly discovers that there are corrupt links between members of the police and the drug trade that directly impacted his own life and circumstances, starting with his brother’s death. Tandy discovers there’s far more to her father’s death and the accident on the rig, through her mother bringing in yet another lawyer/lover to try to sue Roxxon for what she sees as the unfair treatment she received after Nathan’s death as well as the loss of all their assets. Unfortunately for mom’s new friend Greg, he’s put together too much Roxxon related information, which gets Tandy more interested in finding out what really happened, but attracts attention from people who’d rather he not dig any further. It doesn’t end well for Greg.

Piece by piece, both Ty and Tandy begin to ask questions that they’d never thought to ask, never even thought they needed to ask. Each connection hints at how much larger the big picture is, and the situations they get into lead to more chances to use their powers and gain more insight into how their powers work, and slowly discovering how to actively control those powers. There’s also a change in some aspects of their powers: Tandy’s ability allows her to see people’s deepest hopes, and Ty’s ability allows him to see people’s darkest secrets and fears. The original aspects from the comics of Tandy needing to feed Ty’s darkness with her light to save him from being consumed entirely seems to have been dropped. I’m good with that. 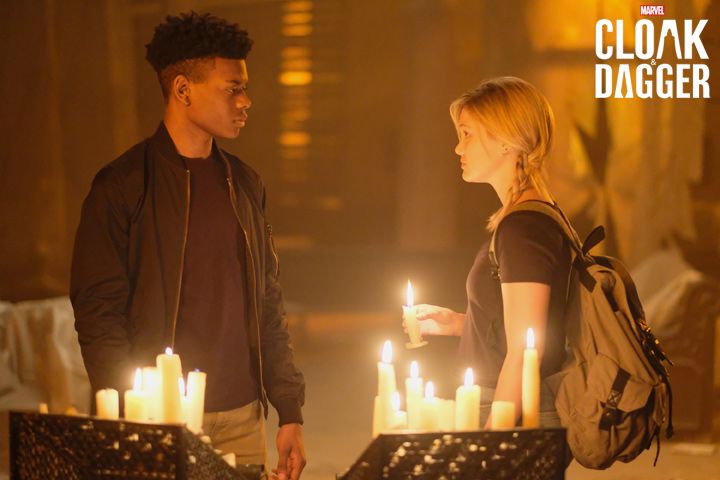 On the periphery are Evita (Ty’s potential girlfriend) and her aunt Chantelle, who are physically and spiritually connected to New Orleans and her history, and through them we learn more about who Ty and Tandy may really be, and what their appearance at this time means for the city. The mythology behind the “divine pairing”, and the implied history of said pair appearing at different times throughout the history of New Orleans is new, and I’m looking forward to finding out more about the source and the history of the “divine pairing”, and what that means for the fate of our heroes. I’m also curious where Tandy’s mom Melissa will be heading, and how Ty’s parents fit in, especially the secret collective that his father Otis belongs to.

The shadow of Roxxon Energy Corporation falls over just about everything in Tandy’s life, while grief and long-held secrets hold sway over both Ty and Tandy. I’m curious to find out if Roxxon characters from the comics show up in this show as they have in Daredevil and Agents of SHIELD. I have a suspicion about one character we’ve already seen (the woman delivering water to the lawyer Greg’s office late at night, and it would be a bit of a spoiler to say more).

This show is much like The Gifted on Fox (Season 1 is on Hulu), a wonderful adaptation of characters from Marvel’s cornucopia of mutants, made richer with inventive and believable character development that doesn’t feel the need to strictly adhere to the history and mythology from the comics. The new story being built in New Orleans is compelling and addictive; the show is a wonderful ride that’s over too soon each week, with more crumbs revealed and more layers added to the Roxxon mystery and the characters’ journeys, and a driving need to want to watch the next episode right then and there.

Marvel’s Cloak & Dagger airs Thursdays at 8pm on Freeform, and is available to rewatch and binge on Hulu.

And if you really want to have a little fun, check out Twitter on Thursday nights, and follow along with some of the cast, writers and showrunner and their live tweets of the episodes… just follow #CloakAndDagger, or any of the following accounts: @CloakAndDagger, @JoePokaski, @canddwriters, @Phangvantageous, @aubreyomari, @olivia_holt,

“Marvel’s Cloak & Dagger” is the story of Tandy Bowen (Olivia Holt) and Tyrone Johnson (Aubrey Joseph) – two teenagers from very different backgrounds, who find themselves burdened and awakened to newly acquired superpowers which are mysteriously linked to one another. Tandy can emit light daggers and Tyrone has the ability to engulf others in darkness. They quickly learn they are better together than apart, but their feelings for each other make their already complicated world even more challenging. The series is based on the beloved comic characters and is co-produced by Marvel Television and ABC Signature Studios.

This show is a wonderful adaptation of characters from Marvel’s cornucopia of mutants, made richer with inventive and believable character development that doesn’t feel the need to strictly adhere to the history and mythology from the comics.